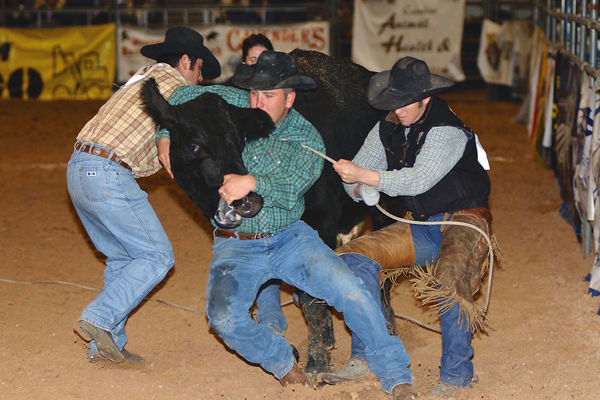 This isn’t your ordinary rodeo, and these aren’t PRCA card-carrying cowboys or pro bull riders. This is the World Championship Ranch Rodeo (WCRR), brainchild of the Working Ranch Cowboys Association (WRCA). If the WRCA is dedicated to preserving the working cowboy’s heritage and lifestyle and promoting ranching, then this annual rodeo, held the second full weekend of November in Amarillo, Texas, preserves the heritage of the sport’s beginnings.

“I like to watch good cowboys and good horses, and they’ve got a lot of ’em here,” legendary rodeo stock contractor Harry Vold says. “And I have never heard anybody gripe about nothin’ here, and in our world, they constantly gripe.”

After all, rodeo got its start on ranches in the 1800s when cowboys would show off their skills for braggin’ rights, and that’s something ranch rodeos haven’t forgotten. There’s no bull riding here, but there is wild cow milking, which Pro Rodeo Hall of Fame announcer Hadley Barrett calls “ranch rodeo’s version of bull riding.”

A roper on horseback plus a milker and two muggers afoot (everyone knows working cowboys aren’t much good afoot) must catch a cow (the rope must be off the saddle horn before milking), get at least a drop of milk into a 12-inch longneck beer bottle, release the cow and deliver milk to the judge. Fastest time wins, only cowboys wearing high-heeled boots don’t exactly run like Michael Johnson. This looks harder than bull riding.

Pro rodeo has team roping, but ranch rodeo has team doctoring. There’s a header (roping the head) and heeler (roping the hind legs), although the ropers can switch assignments, plus a vet. As the riders approach a herd of numbered yearlings, the announcer calls a number. That yearling is cut from the herd, driven over the start line and—maybe—headed and heeled by the ropers. Then the vet dismounts, throws the steer on its side and gives it some medicine (in this case, marking the yearling between its eyes). Easy enough? Well, there’s that two-minute time limit.

Similar is team penning, where three cowboys have to cut three numbered calves from a herd and drive them—and only them—into a pen at the other side of the arena. Fastest time wins.

In team branding, two six-cowboy teams (roper, brander, two flankers, two herd holders) must rope and drag two calves per team to the team’s branding fire (a cold branding iron in a bucket), where the calves are branded and released. Fastest time wins.

About the only event similar to regular rodeos is ranch bronc riding, but there are differences here, too. Yes, it’s a scored, eight-second ride, but the cowboys use working saddles, not PRCA rigging, and the rule is “ride as ride can,” be it one or both hands.

Even Barrett says he takes a different approach to calling a ranch rodeo than announcing a PRCA event.

“I’m pretty sure more people understand the terminology at a ranch rodeo,” he says. “It’s more like a softball tournament. More people in the stands at a ranch rodeo are here to watch a specific ranch compete. They probably know some of the cowboys. It’s a little bit more of a one-on-one feel.”

So how do cowboys practice for these events?

“This is actual stuff that we do,” says Shannon Grooms, who works on the Grooms Brothers Livestock ranch near Oglala, South Dakota, with her husband and his two brothers, and she also teaches at Red Cloud Elementary School in Pine Ridge. “When you live on a ranch and have another full-time job, it’s actually like having two full-time jobs. But this is not necessarily something you have to practice for because you’re doing it every day on the ranch. Of course, I try to lift weights to put myself in better shape.”

Yet, perhaps the biggest difference is with the competitors. Cowboys in the PRCA or Pro Bull Riders tours can earn big bucks and huge endorsement deals by winning. What exactly is a working cowboy competing for?

“Bragging rights,” says a wide-grinning Riley Smith of the Sandhill Cattle Company in Earth, Texas. “We just want to win the rodeo. We’re not looking for money. We’re just out to have a good time.”