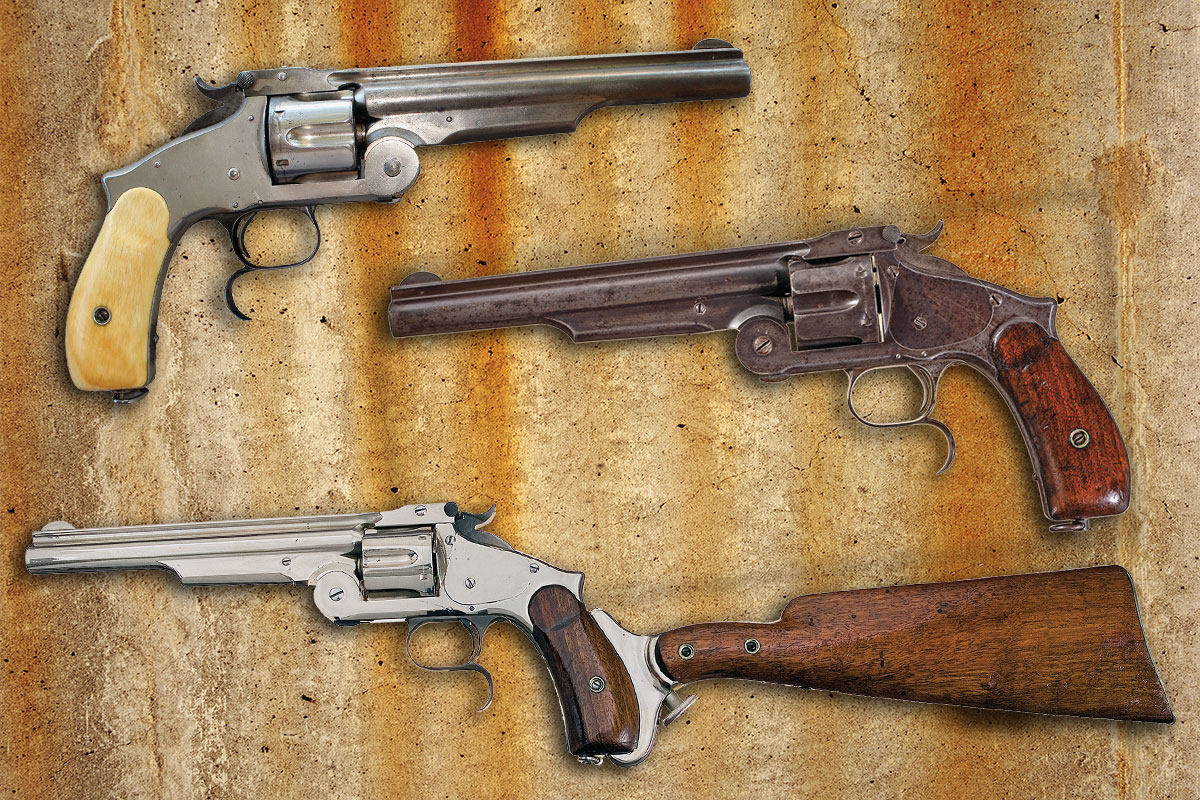 Almost as soon as Smith & Wesson’s (S&W) Model 3 “American,” the first practical big-bore metallic cartridge revolver, was introduced in 1870, a sample was presented to Russian military attaché Gen. Alexander Gorloff. By May 1, 1871, the first of many large contracts for the Russian military were being filled. The single-action handgun also began going through several modifications—most of these alterations were those requested by Russian military officers at the factory. A major change they required was a newer, more powerful cartridge than its .44 American round. S&W developed the .44 S&W Russian, resulting in the retooling to fit the Russian ammunition for the Russian contracts as well as for commercial sales. Thus, the First Model Russian looked virtually like its American predecessor.

A drastic change in design came quickly, though, by the fall of 1871. Captain Ordinetz, a Russian aide at the factory, wanted a new grip shape that would help restrict the revolver from rolling upward in the hand during recoil. After experimenting with a number of grip styles, the factory eventually settled on an enlarged round butt shape, with a butt-mounted swivel and a distinctive “knuckle” or “hump” at the top of the back strap. To further control the firearm during recoil, Ordinetz also had a trigger-shaped “spur” added to the rear underside of the trigger guard, so the shooter’s second finger could grasp it, minimizing the upward movement amid recoil. With these design changes, along with shortening the eight-inch barrel to seven inches, the “Old Model” (also known as the Model No. 3 Russian, Second Model) was conceived.

The Old Model Russian looks clearly Victorian, with a definite European flare. Like other large-bore S&Ws of the day, the Old Model Russian is a top-break revolver. The barrel’s full-length rib holds a rounded front sight pinned through the side, while the rear sight is a small notch in the locking lug of the barrel catch. It was the first in the series that is readily identifiable as a “Russian Model.” It is finished in blue or nickel, generally with smooth, two-piece walnut stocks.

Stampings are along the barrel’s top in English on commercial arms, and in Cyrillic letters with the Russian double eagle on the military revolvers. However, guns in the 1-9000 serial range carried a marking that ended “Jan. 19, 75 Reissue July 25, 1871.” This stamping was used on arms that were shipped to governments that objected to the term “Russian Model” on the pistols. Japan purchased 5,000 of these revolvers, and used them for decades, including during the Russo-Japanese War of 1905.

A total of around 85,200 Old Model Russians were produced between 1873 and 1878, with the Russian government contracting for 70,000 of them. While .44 Russian is the standard chambering for this six-gun, around 3,000 were chambered in .44 Henry Flat, a rimfire round, for the Turkish military. There were 6,200 commercial models produced with serial numbers generally ranging 32800-39000. Only 941 revolvers were cut for shoulder stocks. Unfortunately for S&W, while a hump on the back strap may be desirable for a double-action revolver, it hampered the quick cocking of a single-action. This led to an unpopular view with many Westerners, who preferred the old No. 3 First Model design, resulting in low sales on the frontier. Regardless, the Old Model Russian remains a classic arm in it own right, and one that led to a successful series of Smith & Wesson revolvers.

Phil Spangenberger has written for Guns & Ammo, appears on the History Channel and other documentary networks, produces Wild West shows,
is a Hollywood gun coach and character actor, and is True West’s Firearms Editor.