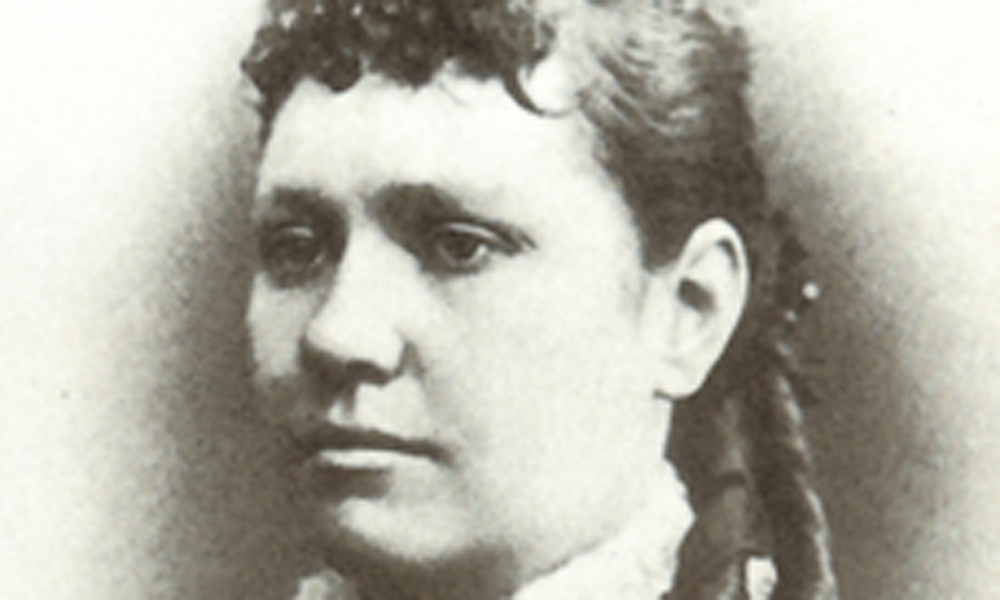 The “Queen of the Western Gamblers” was Alice Ivers. She was both gambler and madam. She also had a religious side, closing her brothel on Sundays where she taught Sunday school lessons to her girls in the parlor where the other six days of the week were devoted to highly secular frolics.

She allegedly came from England and her real name was Alice Ivers. And supposedly she was born on February 21st, 1851 in Devonshire. Another version of her story says she was born in Virginia in 1853 to Irish immigrants and the daughter of a school teacher. One thing for certain, she was likable, pretty and intelligent.

The family followed the silver rush to Leadville, Colorado around 1870 and in her early 20’s she married a mining engineer who also loved to frequent Leadville’s gambling establishments. Not wanting to stay home along she began accompanying him, quietly studying the games. She was a keen observer and a quick learner. Pretty soon she was sitting at the tables and winning both at faro and poker.

When her husband was killed in a mining accident less than a year after they were married she was alone. There were few choices for a young widow in those frontier towns. She could open a boarding house, be a housekeeper for a mine owner or become a prostitute. Alice had a better idea and she began her life as a professional gambler and drifted to mining towns across the West.  She was a natural-born calculator with long, slim fingers that could manipulate the cards deftly and surely.

Alice was a very pretty woman with bright blue eyes and lush brown hair. She always dressed in the latest fashions. She had a knack for counting cards and figuring the odds. Her skills at poker and dealing faro not to mention she was a sight for sore eyes to many a lonely miner kept her in demand. She was always welcome among the fraternity of both professionals and amateur gamblers. Soon she acquired the name, “Poker Alice.”

Because of her religious beliefs she never gambled on Sunday’s but she did acquire a taste for smoking long, black cheroots and packing a .38 caliber six-shooter which she was not hesitant to use.

Over her long career Alice won thousands, lost it then won it back again.  With a pocket full of money she’d head back East, have a grand time, replenish her elaborate wardrobe and when she was broke, return and resume winning more. Her motto seemed to be, “Easy come, easy go.”

She worked her way north to Deadwood, North Dakota where she chanced to meet a house painter and part-time gambler named Warren Tubbs. Despite the fact she beat him often at the gaming tables the two became friends. One night a drunken miner charged him with a knife.  From her table across the room she pulled her .38 pistol and shot the assailant in the arm.

Afterwards, she married Tubbs and the two made a living on her gambling and his work as a house painter. They eventually moved to a farm near Sturgis, South Dakota and had seven children, four sons and three daughters.

Tubbs contracted tuberculosis and died of pneumonia during the great North Dakota “Blizzard of 1910.” She hauled his body in a wagon 48 miles into Sturgis and pawned her wedding ring for $25 to pay for his funeral.  Then she went to the gaming tables and won enough money to retrieve her ring.

Alice hired a man named George Huckert to take care of the farm and she returned to that which she did best, gambling. Huckert proposed marriage several times and finally she relented. She owed him over a thousand dollars in back wages and figured it would be “cheaper to marry him than to pay him off.”

She would later that she those years spent on the farm were the happiest of her life. Bad luck rendered her a widow again. George died in 1913 and once again it was back to earning a living at the gaming tables. This time she opened her own establishment that also doubled as a brothel.

During Prohibition she continued to serve booze and provide gambling for the soldiers at nearby Fort Meade. One night couple of drunken soldiers tried to wreck the place and Alice pulled her .38 and shot one dead and wounded the other. While sitting in jail awaiting her trial she smoked cigars and read from her Bible. She was acquitted of all charges but her establishment was closed.

It wasn’t long before she was back in business. During an interview she said she went to a banker and asked for a $2,000 loan that she promised to pay off in two years. She headed for Kansas City to recruit some new girls and soon the place was up and running. She went to the bank and paid off the loan a year early and when he asked how she paid it off so early she said, I took a couple chaws on the end of my cigar and told him, “Well, it’s this way. I knew the Grand Army of the Republic was having an encampment here in Sturgis. And I knew that the state Elks convention would be here, too. But I plumb forgot about all those Methodist preachers coming to town for a conference.”

Old age was catching up on Poker Alice, she was now in her sixties and her stunning beauty was a long ago thing of the past. She continued to run her “boarding house for single women.” She was arrested a number of times for running a disorderly house and finally sent to jail. That didn’t last long as the legendary Poker Alice was pardoned by the governor. She was now seventy-five years old and her health was beginning to fail.

Poker Alice died in 1930 at the ripe old age of seventy-nine from complications after undergoing surgery for her gall bladder. She was buried in Sturgis.

It’s been estimated she won over a quarter of a million dollars gambling during her career. She once, “I would rather play poker with five or six experts than eat.” That would have made a good epitaph for her tombstone.

In 1987, ironically, the same year gambling and prostitution were outlawed in Deadwood, one of Hollywood’s most glamorous actress, Elizabeth Taylor played Poker Alice in a made for television movie. I’ll bet she would have liked that.

“I went to the bank for a $2,000 loan to build on an addition and go to Kansas City to recruit some fresh girls. When I told the banker I’d repay the loan in two years, he scratched his head for a minute then let me have the money. In less than a year I was back in his office paying off the loan. He asked how I was able to come up with the money so fast. I took a couple chaws on the end of my cigar and told him, `Well, it’s this way. I knew the Grand Army of the Republic was having an encampment here in Sturgis. And I knew that the state Elks convention would be here, too. But I plumb forgot about all those Methodist preachers coming to town for a conference’.”

This was probably the most famous story ever attributed to Poker Alice and, if true, says a lot about the times. In 1913 there were a bunch of soldiers in the house getting pretty unruly and she fired off one rifle shot to quiet them down. Unfortunately, the bullet passed through two of the soldiers, killing one of them. The police closed down the house and took Alice and all six of her girls to jail. At her trial, the shooting was ruled accidental and she was acquitted but forever after, the authorities at Fort Meade were on her case.

She was in her 60’s by then but they kept arresting her for drunkenness and keeping a bawdy house. She always paid her fines and went back to business as usual but eventually, she was sentenced to a term in the state pen for her repeated convictions as a madam. Being 75 years old at the time of her sentencing, she was almost immediately pardoned by the governor.

Alice was a professional gambler, never a “soiled dove”: gamblers enjoyed a much higher social status and pay scale. For the last 20 years of her life, in addition to running the house in Sturgis, she was an often-seen, well-known card player in Deadwood, a town which tolerated gambling and prostitution up until 1987.