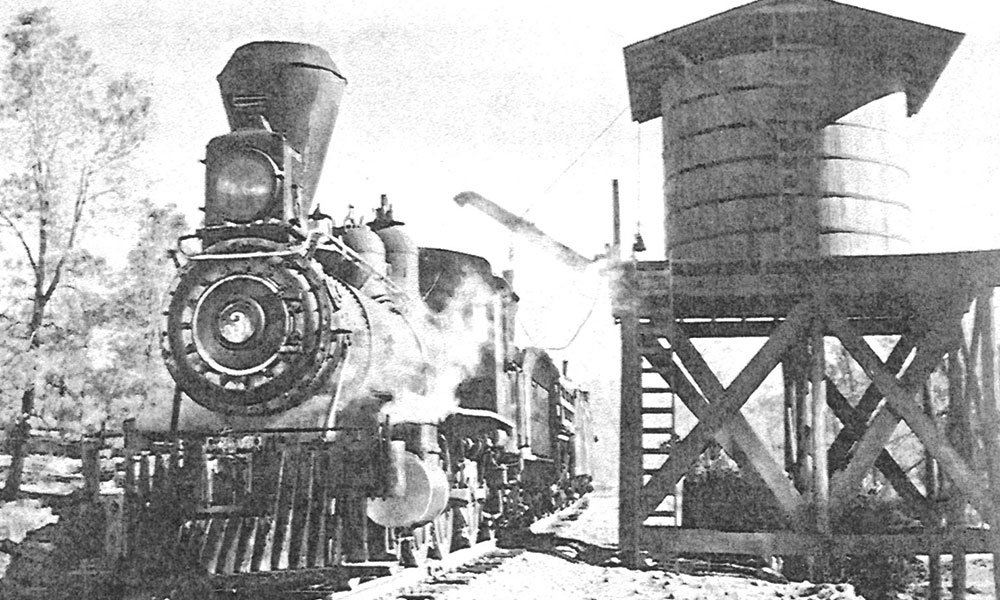 While watching westerns on television and movies you see trains pull up and stop at a water tower and fill up the steam engine. How did those pumps or windmill’s pull the water up to the tower.

Just to give you an idea how much water was used by those water-guzzling locomotives, it took 1,000 gallons of water just to go fifteen miles. Today the D&RG narrow gauge steam locomotive from Durango to Silverton, Colorado uses 108 gallons of water per mile, 10,000 Gallons for the 92-mile round trip. Rolling across flat lands would naturally require less water per mile.

Water pumps have been around since Archimedes but the first self-acting pump was invented in 1796.  Water could be drawn from a nearby stream and pumped up to the holding tank. Or, a well could be drilled.  In the pump house two cast iron pipes, one approximately 6 inches in diameter, and the other, twelve. The water was pumped from the well up into the tower through the 6-inch pipe; and the 12-inch pipe, which has a valve, was used to fill the steam engine boilers. This pipe went to an overhead supply system next to the track which swung over the train when filling.

Windmills were also used. They’ve been around since the Middle Ages however the predecessor to our modern windmill dates back to France and England during the 12th century. The American version was invented in Connecticut in 1854 by a young mechanic named Daniel Halladay who designed the wheel to automatically turn its face into the wind by wind pressure on the vertical tail behind it.  In 1886, Thomas Perry designed the more aerodynamic steel-bladed windmill, with curved blades to catch more wind and that design is still used today.

I’d say windmills and water pumps did more to bring about the so-called “winning of the West” than six shooters.

My father was an engineer for the Santa Fe Railroad when they still used steam locomotives and I grew up in a railroad town in northern Arizona. The town of Ash Fork had no wells. In the 1880s the water for the locomotives was piped down from Johnson Canyon, a, few miles east of town. Later it was hauled by rail from Del Rio Springs about thirty miles to the south, near Prescott. A water train pulled into town daily and pumped it up to a huge holding tank. That was in the 1940s and 50s.

Those steam-driven trains depended on water and lots of it. The rails usually followed wagon roads which followed Indian trails. These trails didn’t usually go in straight lines; they went from spring to spring. You can see that on maps especially in rough country like Arizona where both the northern and southern transcontinental lines zigzagged all over the place. It wasn’t until the interstates were built in the mid-20th century did they run in fairly straight lines.