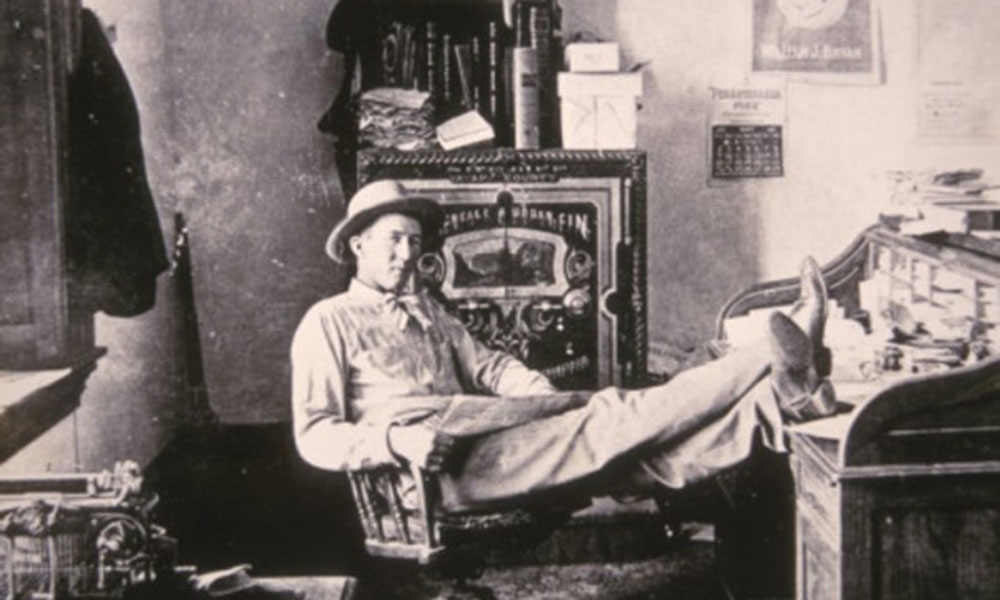 George Ruffner was Yavapai County’s perennial sheriff. He was a top notch peace officer and an expert tracker; it was said he could track “bees in a blizzard,” and he nearly always “got his man.”

He liked being sheriff but he hated having to make campaign speeches. Politics to him was extremely distasteful. At heart he was an old cowboy and was most uncomfortable having to stand on a platform with a bunch of long-winded, promise-making office seekers. His campaign speech usually lasted no longer than, “I’m George Ruffner and I’m runnin’ for sheriff.”

The sheriff had lots of admirers but none was more ardent than Sandy Huntington. Sandy was a scion of the illustrious Huntington family in California but had been exiled to Prescott for his habit of excessive imbibing. He was an intelligent and likable fellow who made friends easily around Yavapai County.  When he was sober he liked to hang around the sheriff’s stable cleaning corrals doing odd jobs. He developed a creative financing play for those wanting to board horses at the stable. Plan A cost $5 a day Sandy would feed the horse and sweep out the stall. Plan B cost $3.50 but the owner had to sweep out the stall. Plan C cost only fifty cents. Who sweeps? As Sandy explained “There ain’t nothin’ in the stall to sweep.”

One particular election lots of folks including Sandy feared the sheriff might lose. As any elected lawman can attest, the longer one holds office the more people he offends.

Sandy decided to take matters into his own hands. Because there are so many illiterate voters the county provided a volunteer to read and mark the ballot for those who couldn’t. So Sandy volunteered.

He stood near ballot box and offered free advice to voters who couldn’t make up their minds. Sandy would read the list of candidates and mark the ballot according to the voter’s wishes. When they came to the office of Yavapai County Sheriff, Sandy would announce the two candidate’s names. If the voter said “Ruffner” Sandy would dutifully take a pen and mark an X in the proper square.

Not everyone shared Sandy’s devotion to the sheriff. “I ain’t votin’ for that damn Ruffner,” one voter scoffed.

Obligingly, Sandy took the ballot and with great aplomb, placed an X in the square next to Ruffner, saying, “Then we’ll just cross out that old scalawag.”

And Sandy cheerfully dropped the ballot in the box.