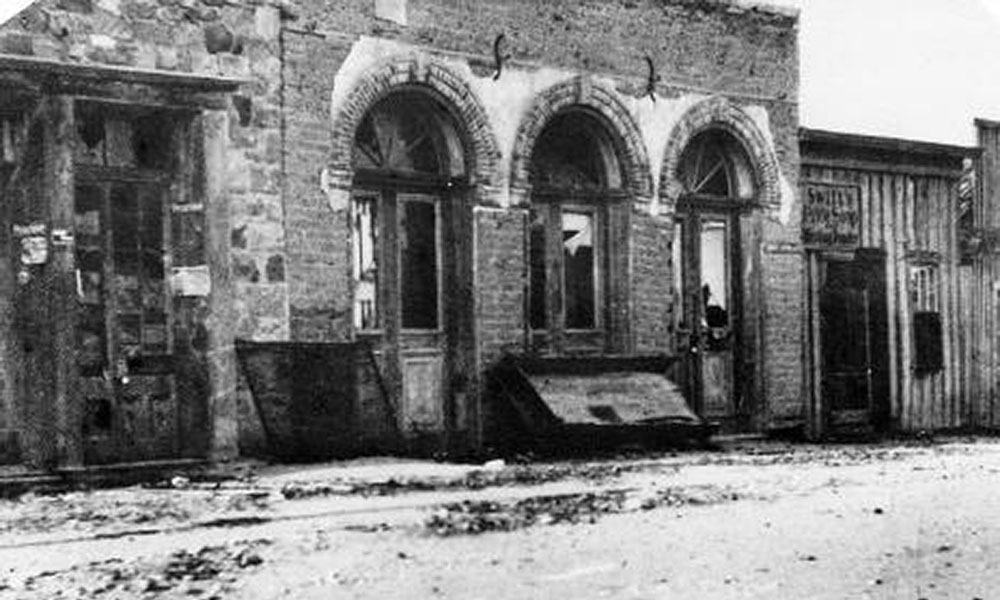 Tombstone’s fabulous Bird Cage Theater opened December 23rd, 1881 to a raucous crowd territorial Arizonans.  There’s no doubt in the realm of legend and lore, it is the richest of any theater or opera house in the Old West.

The bar was open twenty-four hours a day and the place was the soul of Tombstone at night. Dusty cowboys, day labor miners, drifters, droolers, and reprobates filled the smoky room imbibing alongside local nabobs including politicians, lawyers and doctors. Gas-fired lights bathed the stage in light as winking showgirls showed lots of leg.

The shows were a variety of lively acts including minstrel, specialty and skits and it was not uncommon for patrons to shower the stage with silver coins to show their approval to a performer.

One night in 1882 during a performance of the play “Uncle Tom’s Cabin” a drunken cowboy got caught up in the drama of Simon Legree’s dogs pursuing little Eliza across the river. He stood up, drew his pistol and shot one of the dogs. The angry crowd pounced on him and held him down until the marshal could cart him off to jail. The next day the repentant cowboy offered his horse as recompense for the dog. Lucky for him it was a real dog and not an actor in a dog’s costume.

The Irish Jig-dancer Pearl Ardine was a great drawing card at the Bird Cage. A local newspaper called her “one of the most beautiful and most accomplished artists on the vaudeville stage.” Pearl could pick up money thrown up on the stage and stuff in her stockings without missing a step.

Another popular act was, “Mrs. DeGranville, the Lady with the Iron Jaw.” Supposedly, the Herculean Millie DeGranville could hold a canon on her shoulder while it was being fired.

One popular act ended in tragedy one night in 1889. The act known as the “Human Fly” was performed with two daredevil women defying gravity by walking upside down on the ceiling at the Bird Cage. That one ended when the clamps on one woman’s shoes slipped from holes bored into the ceiling to suspend her above the stage broke and she fell to her death.

Pat Holland, town coroner was standing in wings one evening watching a prepare sharpshooter shoot an apple off the head of his beautiful assistant. Pat thought shooter was taking too much time, so grabbed what he thought was a shot gun loaded with paper wadding. He didn’t know that a stagehand had taken the gun out rabbit hunting that afternoon and the gun was charged with buckshot.  Pat aimed and shot the apple all to pieces, along with a wad of hair as big as your fist, sending the hair and apple splattering against the opposite wall of then tiny state.

Another evening a drunken heckler in one of the upper boxes was making catcalls interrupting a soprano’s rendition of a plaintiff ballad.  This brought manager Billy Hutchinson to the stage. He cast a menacing glare towards the perpetrator and ordered the man to shut up. The jeers and laughter continued so Billy ordered his bouncers to quiet the offender. The next thing the audience heard was shouts followed by gunfire coming from the booth. Then to their horror, a “body” was hurled out of the booth, landing on the stage with a thud. After a moment of stunned silence, the audience broke out in laughter as they discovered the “body” was an old rumpled suit stuffed with hay.

A magician calling himself Professor Andress boasted to his audience he could catch bullets in his teeth. As his assistant fired blank cartridges he spit out slugs he’d concealed in his mouth.

From the audience a skeptical customer drew his pistol and shouted, “Catch this one, Professor!”

Disaster was averted when a quick-thinking bystander grabbed his arm, causing the bullet to go astray.

Mustering as much dignity as he could under the circumstances, the Professor made hasty exit, stage left.

A story is told of a time when a visiting stock company was stranded in Tombstone and couldn’t pay their bills. While the group was on stage one night the sheriff attached the performer’s trunks for their unpaid board bill. The unfortunate girls had to go about the town for several days with nothing but their tights to cover them before sympathetic locals took pity and provided them with a change of clothes.

In 1886, with Tombstone on the wane, Joe Bignon and wife, Maulda Branscombe took over. He billed her as “Big Minnie,” and she stood over six-feet-tall, and weighted 230 lbs. Big Minnie was loveliness in pink tights. Although she was trained in ballet, she was no mere dainty, she was also the bouncer for the theater. One night a rowdy pulled his pistol and fired a shot into the ceiling. Big Minnie wrapped her muscular arms around him and lifted him over head, walked out to the sidewalk and threw him half-way across Allen Street.

The irrepressible Bignon had grown up in the circus and was later a member of a black-face minstrels group. One of his better-known acts was the “Hottentot” where he danced while dressed in an absurd black-face monkey. Attached to end of the tail was a hook. At the climax of the act he tossed the hook over the end of a wire stretched between two prop palm trees. Then he swung out over the audience making monkey sounds.

One night during a performance in the nearby town of Pearce the monkey tail broke loose in the middle of his swing and dropped him in the lap of a spectator.

Unabashed, Bignon leaped to his feet, scratched his head in true simian style, bounced back on the stage and bowed to his audience.

The death knell for Tombstone came in the wake of a miner’s strike, followed by the pump house on May 12th, 1886. Joe Bignon was able to keep the theater open for a few more years before he and Big Minnie re-located to the new gold mining town of Pearce.

The popular vaudeville actor, Eddie Foy, played a 2-week stint at the Bird Cage in 1882. He later referred to the long narrow theater as a “coffin.”

Miss May Bell, who played Cousin Hebe in H.M.S Pinafore, is nowadays well-known to Tombstone aficionados by her real name, Josephine Sarah Marcus Earp, longtime significant other of the famous Tombstone lawman.

One night Buckskin Frank Leslie and Uncle Dave Adams were sitting in a box at the Bird Cage when a man in the box across from them draped his leg over the rail.  Frank and Dave yelled at him to take in his leg but either he didn’t hear them or chose to ignore them. They told him again and still no action, so Buckskin Frank drew his six shooter and shot the heel off the man’s boot.  The offending leg was withdrawn forthwith proving that adage, you’ll get more with a kind word……and a gun….than with just a kind word.

One time a female performer in a melodrama became ill and a local prostitute who was quite popular among the miners and cowboys was asked to fill in.  All she had to do was walk on stage, be shot by her lover, and collapse on the floor. She performed it well and as her lover stood over her in deep remorse, he said, “Oh what have I done?  What have I done?”

“I’ll tell you what you done,” came a voice from the audience, “You done killed the best whore in town.”

The Bird Cage tried to go up-scale to attract a better class of people by staging a “Ladies Night.” None showed up.

Like this story? Try: The Mysterious Death of John Ringo