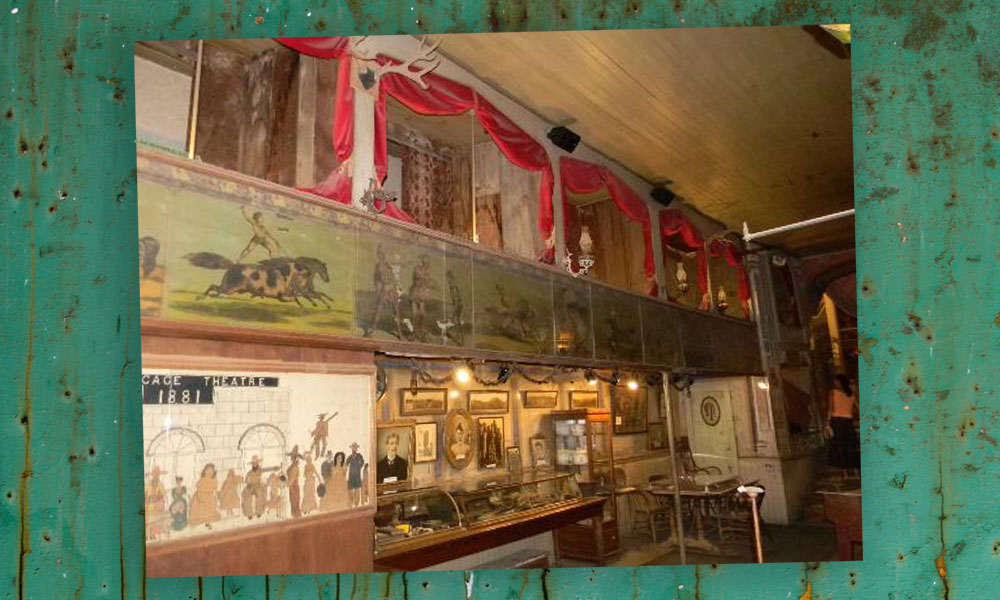 Billy Hutchinson, who opened the Bird Cage on December 23rd, 1881, proved up on the old adage, once an entertainer always an entertainer. One night a drunken member of the audience occupying one of the boxes kept hurling catcalls and insults at the performers on the stage below. Finally Billy walked out on the stage and asked the man to silence himself. This only provoked more catcalls. Billy then sent two bouncers up to the box. There came the sound of a scuffle, shouting, arguing and then a gunshot. The horrified customers then witnessed a body fall from the box and on to the stage. Shock turned to laughter when the “body” turned out to be a straw dummy that resembled a scarecrow.

One evening Pat Holland, recently elected Tombstone’s coroner was standing backstage at the Bird Cage as a sharpshooter was preparing to shoot an apple off the head of a young lady.

Annoyed the shooter was taking too long to line up his shot Pat grabbed an old stage prop shotgun and thinking it was loaded with nothing but powder and wadding, fired off what turned out to be a live load of buckshot. Turns out one of the employees had taken it out rabbit hunting that afternoon and forget to remove the shells.

The shot not only blew the apple to pieces but took off a large chunk of the gal’s topknot and sent it smashing into the opposite wall of the theater.

One night the notorious Buckskin Frank Leslie and a friend were sitting in a box enjoying the show when a cowboy in the box next to them draped his leg over the rail. “Hey mister take in yer leg” Leslie yelled.

Either the guy didn’t hear or chose to ignore him so Leslie yelled again, to no avail. So he drew his six shooter, took aim and shot the heel off the cowboy’s boot. The offending leg was quickly withdrawn and not seen dangling over the rail again proving once again, you’ll get more with a kind word….and a gun than with just a kind word.