The Bombing of Naco 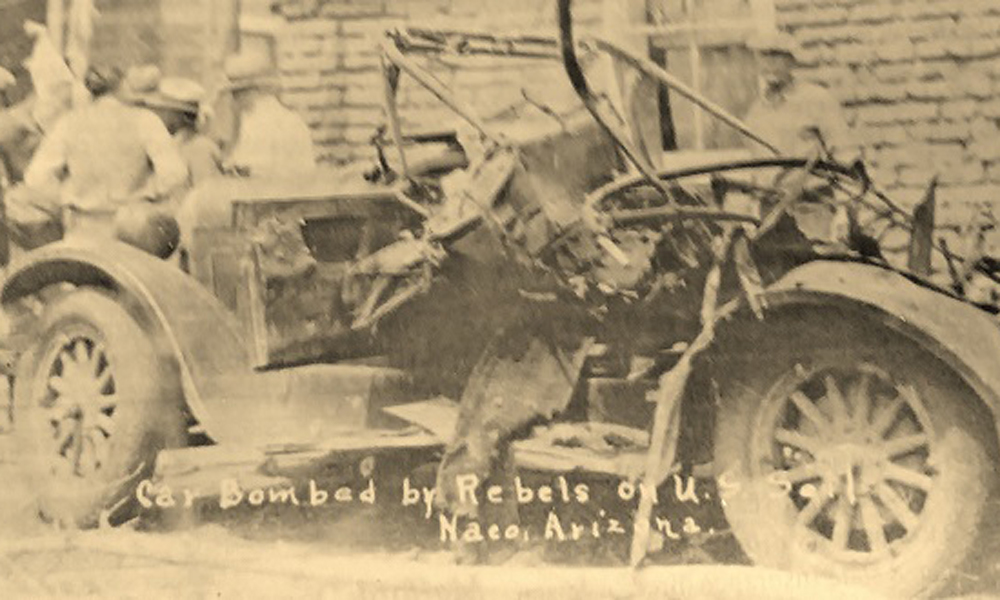 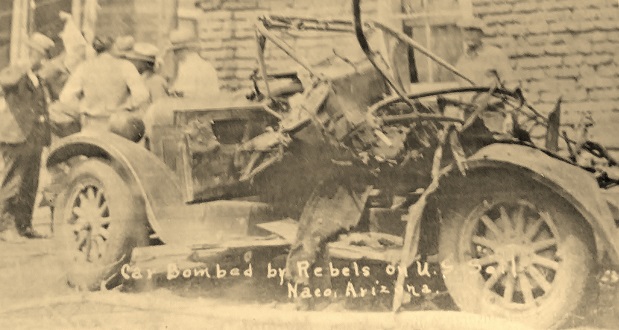 Few people realize it but the world’s first aerial combat took place near the Arizona-Mexican border. During frequent revolutions in Mexico during the early 1900’s American barnstorming pilots hired out to fight for one side or another. Despite the fact that it was a violation of American law to take part in the fighting the pay was too good to refuse and these gypsy moths were looking for adventure.

In 1911, Hector Worden was hired by the revolutionaries to fly bombing missions against the federales. For bombs he used suitcases loaded with explosives. He’d hire a young kid to ride in the rear seat and act as bombardier. The kid would light the fuse with a cigarette and toss it overboard on the enemy below. The bombs did little damage but did have a psychological effect on the ground troops.

In 1913, Didier Masson strafed a Mexican gunboat off Guaymus using lead pipes stuffed with dynamite. He missed his target but had the satisfaction of seeing the sailors jump ship and swim frantically for shore.

In air battles over Mexico the zany stunt pilots sometimes fired six shooters at each other from the cockpits of their planes.

Arizonans used to gather on the American side and watch the action like spectators at a baseball game. In Bisbee school kid’s ditched classes, housewives abandoned their chores and shopkeepers closed their stores to venture down to Naco and sit atop a railroad box car or a rooftop and watch the opposing armies clash on the border. At times they had to duck for cover when a bullet passsed overhead. One stray bullet went through an open window and shot the tail feathers off a canary.

This was a civilized battle too. Legend has it both sides declared an armistice at sundown and headed to the local cantinas with the pretty soldaderas for a night of revelry.

One of the most bizarre incidents occurred during the 1929 Cristero Revolution when an Irishman named Patrick Murphy dropped his bombs on the border town of Naco. He was hired by the rebels to bomb federale trenches at Naco, Sonora.

The barnstormer was hired by to fly bombing missions over the federale lines. For reasons known only to Murphy, he flew unloaded his bombs on Naco, Arizona. One bomb landed on Newton’s Garage where it destroyed a Dodge touring car belonging to a federale general who’d stored it on the American side for safekeeping while another hit the Phelps Dodge Mercantile Store. Then an unidentified federale grabbed his .30-06 rifle and took a pot shot at Murphy’s plane just as it was making another bombing run. A trail of white smoke unraveled from the plane as it headed down for a crash landing.  Murphy escaped to the rebel lines then into the United States where he was quickly arrested by American soldiers, taken to Nogales and locked in jail but was never charged. And he never revealed his reasons for dropping his bombs on Arizona but it did mark the first time the United States had been bombed by someone in the employ of a foreign power.