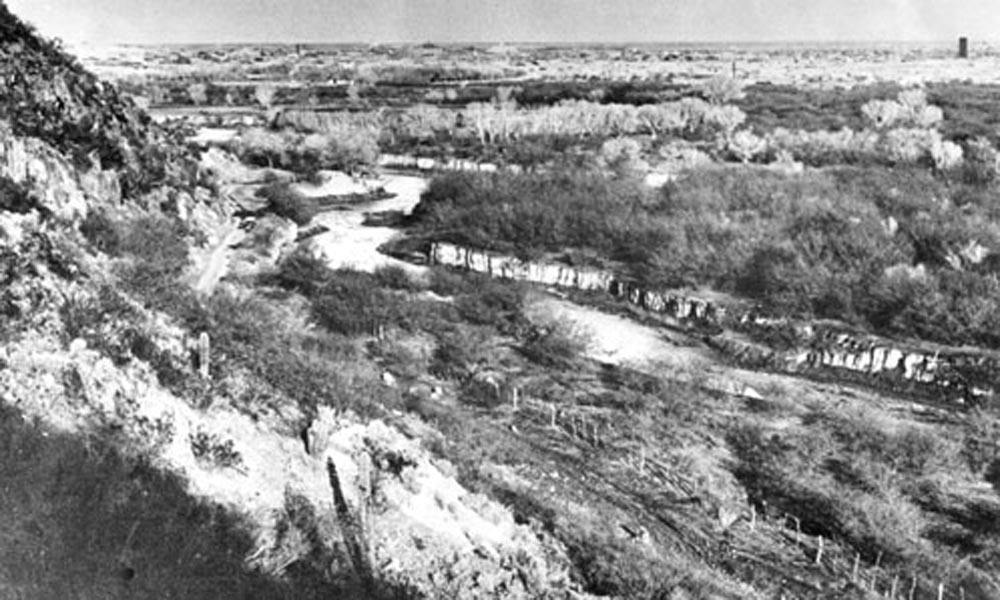 The San Ignacio de la Canoa land grant is one of the oldest and most interesting in Arizona.  The Canoa, located south of Tucson in the fertile Santa Cruz Valley with the picturesque Santa Rita Mountains on the east, was probably named for a hollowed out cottonwood log that resembled a canoe but was used as a watering trough for horses.  Captain Juan Bautista de Anza camped there in 1775 on his historic expedition that led to the colonizing of California.  Over the years Spanish military units from the presidios at Tucson and Tubac stopped there to camp.

In September, 1820, a year before Mexico gained independence from Spain, Tomas and Ignacio Ortiz, of Tubac petitioned the intendente of Sonora for four sitos for the purpose of raising cattle and horses.  A sito is a square league containing 4,338,464 acres so four sitos would equal more than 27 sections or square miles of grassland along the Santa Cruz.  The appraised value was $30 a sito since there was no running water except during the rainy season when the Santa Cruz and its arroyos were flowing.  An auction was held and the Ortiz brothers out bid others, paying $250 or about nine dollars a sito.

The Santa Cruz Valley was one of the main Apache plunder trails into Mexico. During the warmer months they’d leave their lairs in the mountains of today’s Arizona and head through the river valleys into Sonora and Chihuahua. When ranchers began settling in those valleys in the 19th century they too became victims or the raiders. During the 1830s and 40’s these raids caused most of the land grant ranches in Arizona to be abandoned.  Earlier, in 1786 a treaty with the Apache was made whereby the Spanish kept the Indians pacified with food, alcohol, and inferior guns. These so-called establacimientos de paz were allowed to deteriorate under the new Mexican Republic and the Apache had resumed their raiding and plundering of the settlements and ranches.   A census report in 1848 at the end of the Mexican War showed people living in only two places.  Tucson had 760 residents and Tubac had 249.  Soon after the count an Apache raid on Tubac left nine citizens dead and the old presidio was abandoned.

During the 1850s the Ortiz brothers still owned the Canoa however the Americans were arriving and some settled temporarily on portions of the huge grant.  The Apache continued to raid, killing settlers and driving off livestock.  In 1857 an Apache raid killed seven lumbermen and drove off some 280 animals.

Charles Poston, later recognized as the “Father of Arizona,” visited the carnage the day after the attack and wrote:  “When we reached the Canoa a little after sunrise, the place looked like it had been struck by a hurricane.  The doors and windows were smashed, and the house was a smoking ruin.  The former inmates were lying around dead, and three of them had been thrown into a well, head foremost.  We buried seven in a row in front of the burnt houses.”

Bill Kirkland was the first American to bring cattle to the Canoa.  In 1857 he drove 200 head in from Sonora.   Within three years raiding Apache bands had pilfered the entire herd.

The indestructible Pete Kitchen settled on the huge ranch between 1857 and 1862.  Believing he had just as much right to be there as them he stubbornly refused to be driven out.  Kitchen fortified his ranch house with sturdy adobe walls and fought off an onslaught of attacks before moving south to Potrero Creek where he stubbornly resumed his battles with Apache raiders.  Kitchen was one of the few who held out against the Apache after the withdrawal of the military at the outbreak of the Civil War.

In the years following the Civil War the Apache were moved to reservations, the Canoa changed hands several times.  Today the town of Green Valley and other communities occupy much of the old Canoa Ranch.