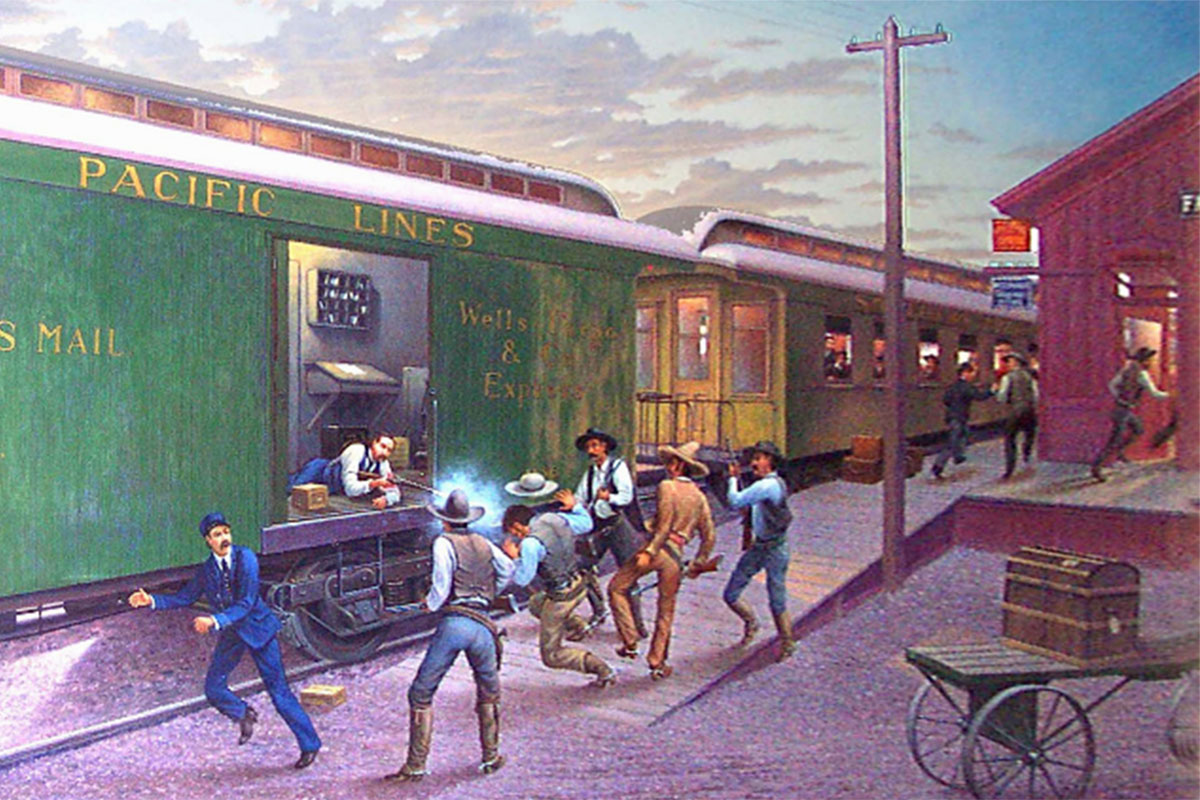 The railroad arrived in what became town of Fairbank in 1881. It was the closest rail link to the boom town of Tombstone, at the time one of the largest cities in the West.

On February 15, 1900 the train station was the scene of a sensational attempted train robbery. Five outlaws, including Three-Finger Jack Dunlap and Bravo Juan Yoas, all were members of the Burt Alvord gang. What the boys didn’t know that day was the Wells Fargo messenger just happened to be the famous ex-Texas Ranger, Jeff Milton. Not expecting any danger as the train approached the station, he was standing in the open doorway.

Previous to the arrival of the train the bandits were carrying on, posing as drunken cowboys.  Suddenly they jerked their pistols and opened fire on Milton. A bullet ripped into his left shoulder severing an artery.

Seriously wounded, Milton fell back inside the car behind a trunk. His gunfighter instincts took over and he grabbed a Wells Fargo short barrel ten-gauge shotgun and waited behind the trunk for the bandits to charge.

Thinking Milton was dead the bandits raced towards open door. Three-Finger Jack was in the lead and he caught a load of buckshot in his mid-section. Bravo Juan had just enough time to turn around. He caught a load in the seat of his pants. It was not a good place to be shot when one was going to make his getaway on horseback.

The outlaws rode away that day empty-handed. Three-Finger Jack was mortally wounded and was slowing their escape so, a few miles from Fairbank his pals decided to leave him to die along the trail.

Meanwhile, back in Fairbank a posse was organized and trackers easily picked up the trail leading to where Jack lay dying.

Needless to say, Jack was much-annoyed at being left behind and was only too willing to give the possemen enough information to arrest all the gang members including the gang leader who doubled as Willcox town marshal, Burt Alvord.

Alvord has never gotten the recognition he deserved. A few months earlier he had planned and executed a near-perfect train robbery west of Willcox. To become an outlaw legend one must have a name like Curly Bill or Johnny Ringo. Good hair is also important for legendary status. My old mentor, Doc Leland Sonnichsen, used to say “If Burt Alvord hadn’t been bald-headed he might have been as famous at Butch Cassidy.”