The Killing of Bill Tilghman 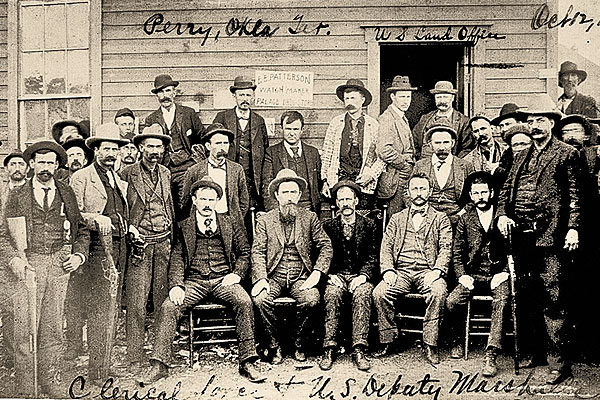 By the time he got to Cromwell, Tilghman was a living legend—a lawman in Dodge City, Kansas, in the 1870s and 1880s, and one of the “Three Guardsmen” deputy U.S. marshals who helped clean up Indian Territory in the 1890s.

To be fair, he had also committed some acts on the other side of the law (horse stealing, maybe robbery, corruption), but much of that was forgotten, especially after he made his biographical film, The Passing of the Oklahoma Outlaws, in 1915.

Tilghman used his reputation to get the job as Cromwell city marshal in 1924 at the age of 70 (he also may have been working as an undercover agent for the governor). He was charged with keeping the peace in the hell-raisin’ town where Prohibition was more of a suggestion than a law.

Then Tilghman ran into Wiley Lynn.

Lynn, in his early 30s, was a federal Prohibition agent, and he and Tilghman didn’t get along. Lynn’s cronies claimed Tilghman accepted bribes for allowing vice to flourish in town. The Tilghman faction claimed Lynn was the drunk and the crook.

The commonly told story about the killing, one put out in history books and TNT’s You Know My Name, is that a drunk Lynn, accompanied by a soldier and a couple of floozies, drove up in front of Pop Murphy’s dance hall when his gun went off. Tilghman confronted him; Lynn responded by shooting the lawman two or three times. He died 20 minutes later. Lynn drove to Holdenville and surrendered to authorities.

But other tales came out once Lynn’s murder trial was underway on May 22, 1925—and the best account of the proceedings is in Johnny D. Boggs’s Great Murder Trials of the Old West. The defense claimed that Tilghman had been trying to stop Lynn from raiding Pop Murphy’s. The marshal grabbed Lynn with one hand and jammed a pistol into his ribs, saying that he was going to kill him. At that point, Lynn got his gun out and shot Tilghman.

Lynn testified in his own defense, re-enacting the shooting. For whatever reason, the prosecution didn’t put Hugh Sawyer, Tilghman’s deputy, on the stand—and he was the closest person to the two when the guns went off.

Lynn was found not guilty.

Zoe, the marshal’s widow, never accepted that ruling. She wrote articles and books, painting her husband as a saint and proclaiming that he had been murdered by a drunk and corrupt Prohibition man. Lynn unwittingly helped her arguments. With his law enforcement career over, he drank heavily and was arrested a few times—before dying in a gunfight in 1932.

So what happened? Was Tilghman murdered, or did Lynn shoot him in self-defense? The truth probably lies in the middle, as Tilghman and Lynn were flawed men who played both sides of the law.