The Railroad Comes to Holbrook 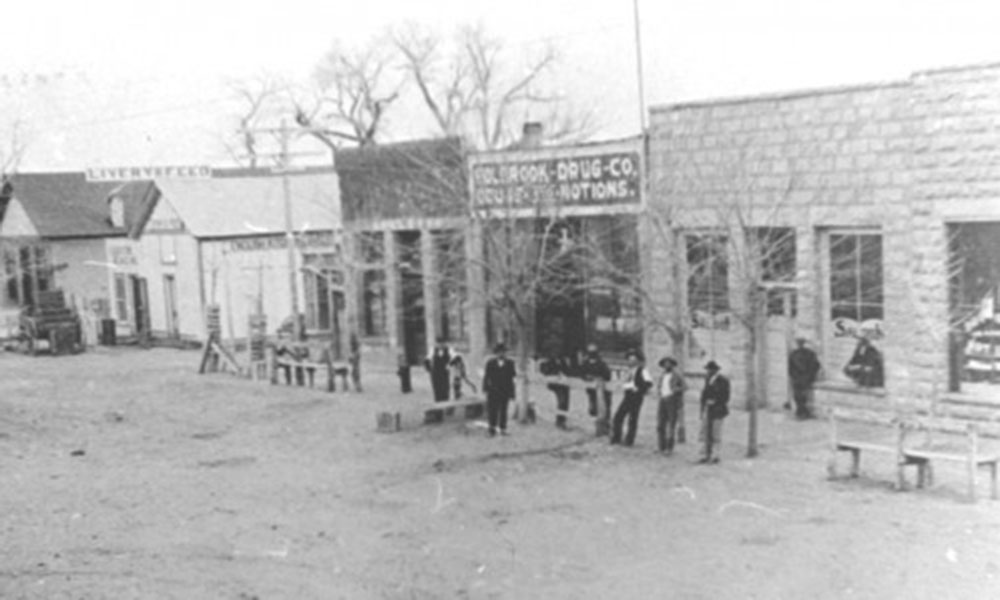 Holbrook, Arizona, located at the junction of the Rio Puerco and Little Colorado rivers and straddling the new Atlantic and Pacific Railroad, was soon to become one of the wildest cow towns in the West.

Before the railroad arrived in1881, Holbrook was known as Horsehead Crossing.  Two miles east of the river crossing, Berardo Freyes ran a saloon. Travelers passing through began calling the place, Berardo Station. Berardo had a pretty wife who was both free-spirited and entrepreneurial. She opened a restaurant and store in the bar where she caught the beguiling fancy of Henry Huning, a lonesome bachelor from Show Low. He managed to get Berardo drunk on his own whiskey one night and rode away with the saloonkeeper’s winsome esposa.

The saloon at Berardo faded into oblivion and the new community was called Holbrook in 1882 for H.R. Holbrook, an official on the Santa Fe (Atlantic and Pacific) Railroad. By 1887, the town had about two hundred and fifty residents. Businesses included a Chinese restaurant run by a man named Louey Ghuey, Nathan Barth’s store, Schuster’s store and five or six saloons. Contrary to popular myth, there never was a “Bucket of Blood” saloon. That was a humorous nickname given by the cowboys to any rough and tumble drinking establishment where the sawdust on the floor was last night’s furniture.

Holbrook in those days was, to paraphrase those immortal words of Mark Twain, “no place for a Presbyterian………”so very few remained Presbyterians, or any other religion for that matter.  In fact, the town had the unique distinction of being the only county seat in the United States that had no church until 1913.  And that only came after Mrs. Sidney Sapp cajoled her attorney husband into organizing a building fund to build one.

Apache County, in those days, was a vast, rugged area of some 20,940 square miles, larger than Vermont and New Hampshire combined. Originally a part of Yavapai County, it had been created in 1879.

The arrival of the railroad in 1881 opened up the plateau country of northern Arizona to large scale cattle ranching.  The territory’s most spectacular ranching enterprise, the Aztec Land and Cattle Company, better-known by its hashknife brand, was running some 60,000 cows and 2,000 horses on two million acres of private and government land.   The absentee-owned outfit was literally surrounded by rustlers who preyed on the herd like a pack of wolves. Many of the rustlers were not outlaws by trade but small ranchers who felt they had a right to rustle Aztec stock because the big outfit had taken over public lands.

To expedite the building of transcontinental railroads the federal government awarded the railroads like the Atlantic and Pacific alternate checkerboard sections on both sides of the tracks. The railroads in turn sold the land to private corporations. The even numbered ones remained government property. Thus, if an outfit like the Aztec bought a million acres their cattle could actually graze on twice that amount. The nesters figured that if the big outfits could graze their cattle for free on public lands then they should have a right to harvest a few of those cows.

It was estimated that a million and a half cows occupied the ranges of Arizona. All those cows naturally attracted the lawless element and soon the ranges were overrun with horse thieves and rustlers. One report claimed 52,000 cows were rustled in one year alone. Convictions for outlawry were rare; the Hashknife went fourteen years without getting a single conviction for rustling.

The situation had become so desperate that, in the fall of 1887, the Apache County Stock Association hired a range detective to eliminate a few of the most rapacious outlaws in hopes of putting the others to flight. Only two men in the organization knew the identity of the regulator and they were sworn to secrecy. The association used its entire savings, some $3,000, for bounty money and used its political persuasion to have the hired gun appointed a United States deputy marshal. The gunman, acting as judge jury and executioner, moved with swift vengeance. Cold and calculating, he shot down two well-known rustlers, who “resisted arrest.” He then read warrants over their dead bodies.

The six-gun justice served up by a mysterious avenging angel was enough to strike terror in the hearts of the rabble and sent many of them scurrying for other pastures.  This mysterious range detective’s identity was kept a secret but it’s believed it was Jonas V. “Rawhide Jake” Brighton, a former bad man who became a hired gun for law and order.