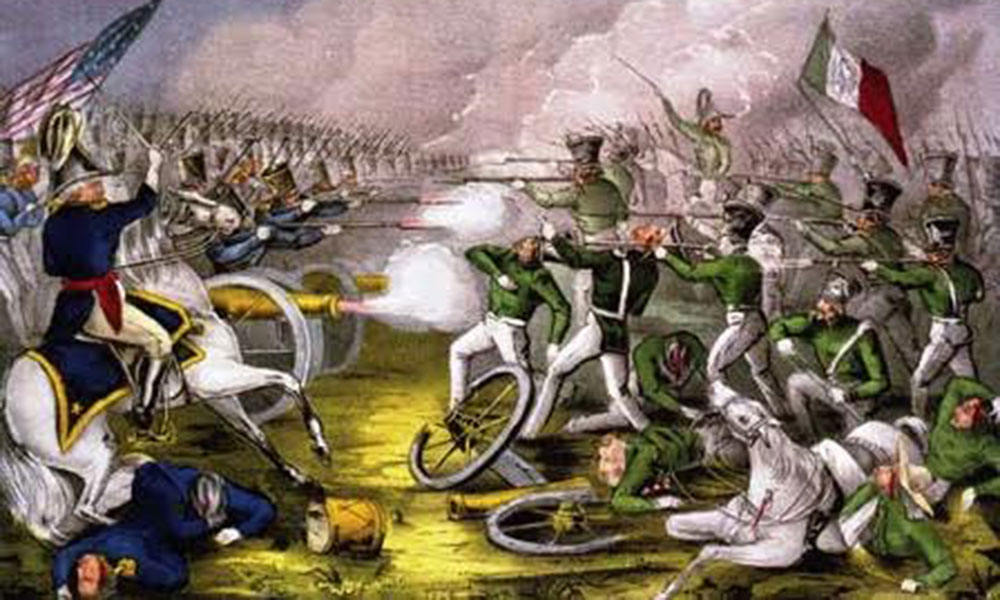 The St. Patrick’s Battalion, or as the Mexicans called them San Patricios, were a battalion of mostly Irish Catholic immigrants who deserted the American Army and fought on the Mexican side in the War with Mexico, 1846-1848. The Mexicans also called them los
Colorados because so many of them had red hair. There were also immigrants from many other European countries, mostly Germans, including Mexicans of European descent and ex-slaves.

They were engaged in some of the toughest battles of the Mexican War. Being Catholic in a mostly Protestant U.S.A. they were not allowed to attend mass were subject to a lot of harsh treatment and prejudice by their Protestant officers and NCO’s where flogging
was legal and deserters were branded

The San Patricios were led by John Riley, who had joined the Army and been a sergeant and drillmaster of the Corps of Cadets at West Point before the war.

Riley joined a large number of not only Irish but English, Scots, ex-slaves, Native Americans and Europeans who chose to immigrate to Mexico prior to the war. The charismatic Irishman was able to forge a discernibly Irish identity on the battalion. Under his leadership they were became an effective artillery unit.

Very few of them were American Citizens. Being Catholic the Irish had much in common with the Mexicans and are revered figured figures in Mexico and Ireland today. For that matter, they’re heroes to many in the U.S.A. today.

Some historians believe they were motivated to join Mexico for religious reasons while others believe it was because of the harsh and unjust treatment they received from officers and NCO’s in the American Army. Still others say it was because of the incentives
offered by Mexico. They were offered better treatment, higher wages and generous land grants. All of the above were reasons for their desertion.

The Irish have a long history of joining forces with Catholic countries. The storied Flight of the Wild Geese were young Irishmen in the 17th and 18th centuries who fought with Spain and France.

The Spanish Colonial Colonel Hugh O’Connor who founded Tucson in August, 1775 was one of those Wild Geese.

On August 20, 1847, the San Patricios made their last stand at the bloody battle of Churubusco. Riley’s artillery battalion held off the Americans to cover General Santa Anna’s retreat and in doing so their ammunition was exhausted and they were overrun by their former comrades. It was brutal; only seventy-five out of a battalion of 260
survived. The Mexican Government condemned the aftermath of the battle as Gringo Barbarism.

In the aftermath, in fairness to the Americans military, the San Patricios were tried fairly and in accordance to the rules of war at the time. Some were acquitted and others, like Riley, who had deserted before hostilities began were sentenced to lashing and branding.

Fifty San Patricio’s were tried for desertion and treason in time of war. On September 13th, thirty condemned San Patricios were hanged on a hill near the castle of Chapultepec.

It is said the thirty San Patricios, stood on the scaffold, hands tied behind their backs, nooses around their necks, cheered for the flag they’d betrayed as the stars and stripes were raised over Chapultepec.

John Riley was given fifty lashes and twice branded on the cheek with a with a two-inch letter D for deserter. The first time they branded it upside down so they branded him again. The prisoners were forced to dig the graves of their fallen. Mexicans were shocked by the brutal treatment bestowed on the San Patricios by the Army.

The Mexican-American War saw the highest desertion rate on any war in U.S. history. Of the 9,000 Americans who deserted during the war the only ones hanged were the San Patricios. In all fifty were hanged in what is the largest mass execution in American history. As a nation, Americans were divided on the nobility of the war.

Future president Abraham Lincoln denounced the war in Congress and future general and president, Ulysses S. Grant described the conflict as “the most unjust war ever waged by a stronger against a weaker nation.”