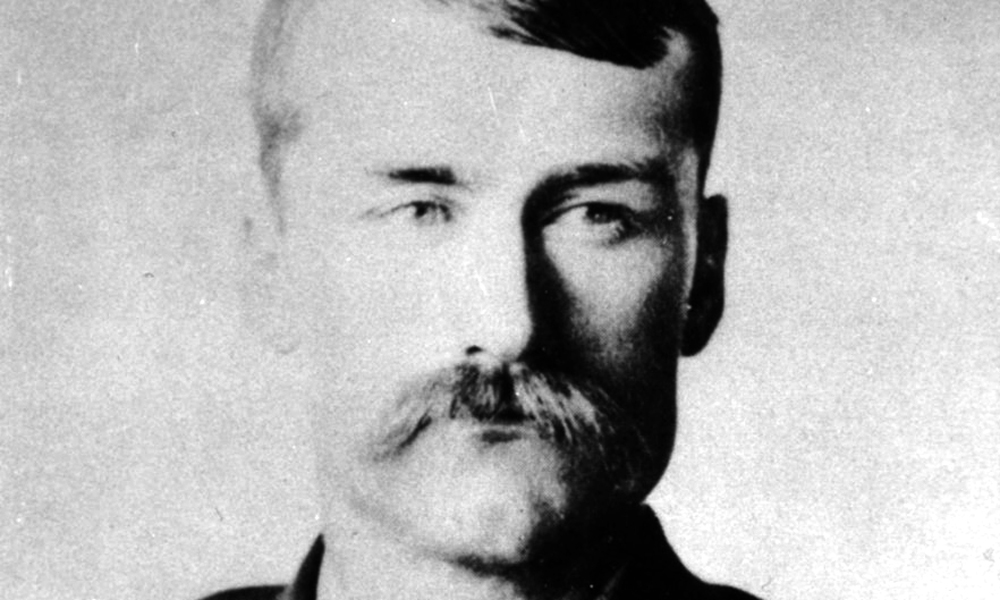 The Old West was quickly fading from reality into myth by the mid-1920’s. Most of the old time gunfighters had gone on to their great reward and Hollywood had taken up the chore of re-inventing the gunfighter. Tom Mix was making $17,000 a week performing superhuman feats from atop his famous horse Tony. During the Roaring Twenties, the heroes of the silver screen always packed two six guns that never needed reloading; wore cowboy boots with their trousers tucked in; were quick on the draw; and never lost their hats in a barroom brawl.

During the Roaring Twenties there was still one old gunfighter left packing a gun and a badge. His name was Jim Roberts and he was nearly 70 years and walked with a stoop but he was still the real deal. He was the law in the mining town of Clarkdale, Arizona and he was known affectionately as “Uncle Jim.”

Old timers remembered Jim Roberts as the top gun in the notorious Pleasant Valley War between the Grahams and Tewksbury’s. Historians claim as many as fifty men died with their boots on in the feud that lasted several years.

By the late 1880s most of the leaders in the feud were dead. Among the living was Jim Roberts. The fighting men on both sides who survived were charged with murder but interestingly, none were ever brought to trial. For one reason or another witnesses for the prosecution had a way of not showing up in court.

Overnight, Jim Roberts went from being a wanted man to a respected lawman. A gunfighter with his reputation and skill with firearms was much sought-after by sheriffs and civic leaders wanting to bring law and order to their counties and communities. He lived up to his reputation, taming some of the toughest towns in Arizona.

In 1889 he hired out as a deputy sheriff for Yavapai County Sheriff, Buckey O’Neill. While keeping the peace in the mining town of Congress he met twenty-year-old Melia Kirkland, the pretty daughter of pioneer rancher William Kirkland. In 1856 her father had raised the first American flag over Tucson. The couple were married in Prescott in 1891 and the following day they took up residence in Jerome, a mining town perched on the side of Cleopatra Hill in the Verde Valley.

Jerome was a typical western mining town with an abundance of boisterous, devil-may-care reprobates and dozens of saloons that remained open twenty-four hours a day, seven days a week. Keeping the peace took a man with the bark still on.

One night three men escaped to the outskirts of town after killing a man over a card game. They sent a challenge to Roberts and a young deputy to come and get them. As the two lawmen approached the desperados Roberts said quietly, “You take the one in the middle and I’ll take the other two.”

When the youngster started to tremble, Roberts said in a kind but firm tone, “Step out of the way son; I’ll take ‘em all.”

A moment later all three killers were dead on the ground.

Over the next several years Roberts was a deputy sheriff in Douglas, Florence and Humboldt. In 1927, at the age of sixty-nine he returned to the Verde Valley and took a job as constable at Clarkdale. Arizona’s wild and wooly days were over. The era of the gunfighter had passed from reality into the realm of romance and into the hands of novelists and mythmakers.

By this time Roberts was one of only two or three of the fighting men of the Pleasant Valley War still living; a genuine western idol of an age turned to legend. Unlike others of the era he didn’t have much to say about those days. There was no brag nor swag. He also didn’t drink or play cards. He still lived by the feudist, Code of Silence and clammed up whenever anyone asked him about the Graham-Tewksbury war. A Hollywood film company offered him a lot of money to tell what he knew about it. He turned them down.

I interviewed his son, Bill Roberts, in the early 1970s who told me his father never spoke to him of his days as a Tewksbury partisan in the Pleasant Valley War. Nor did he talk of much else concerning his past. “My mother,” he said, “Only knew that my father ‘came from Missouri.’”

Youngsters around Clarkdale heard their father’s stories about Uncle Jim’s days as a famous gunfighter and lawman but all they knew about the Old West was gleaned from the western movies starring Buck Jones, Hoot Gibson, Ken Maynard and Tom Mix.

They asked questions such as, “Why doesn’t he dress like Tom Mix?” Why does he ride a mule instead of a horse? Why does Uncle Jim wear an old slouch hat instead of a wide-brimmed Stetson?

To all these questions Uncle Jim just smiled and went about his duty. In time they began to suspect the stories their parents told were just tall tales.

All those doubts were laid to rest on the morning of June 21st, 1928 when two Oklahoma bank robbers named Willard Forester and Earl Nelson held up the Bank of Arizona in downtown Clarkdale. They ran outside the bank with $40,000 and jumped into their getaway car. It was the largest robbery in Arizona history at the time.

They turned the corner just as Uncle Jim was making his rounds. Nelson spotted the old lawman and fired a shot that ricocheted off the sidewalk in front of him. As the car sped away the Roberts drew his pistol from his hip pocket, took a deliberate aim and shot the driver through the head. The car careened off the road and into the school yard. Hollywood couldn’t have staged it any better if something spectacular was needed to show those youngsters the old gunfighter still had the right stuff.

Uncle Jim was late coming home to lunch that day and when Melia asked what kept him. True to his character, he simply said, “There was some trouble.” According to his son that’s all he ever said about the shootout.

Uncle Jim died of a heart attack January 8th , 1934 while making his rounds. It seems fitting that one of the Old West’s greatest lawmen and the last gunfighter of the Pleasant Valley War should die with his boots on. But wait a minute—one thing I forgot to mention—Uncle Jim didn’t wear cowboy boots.