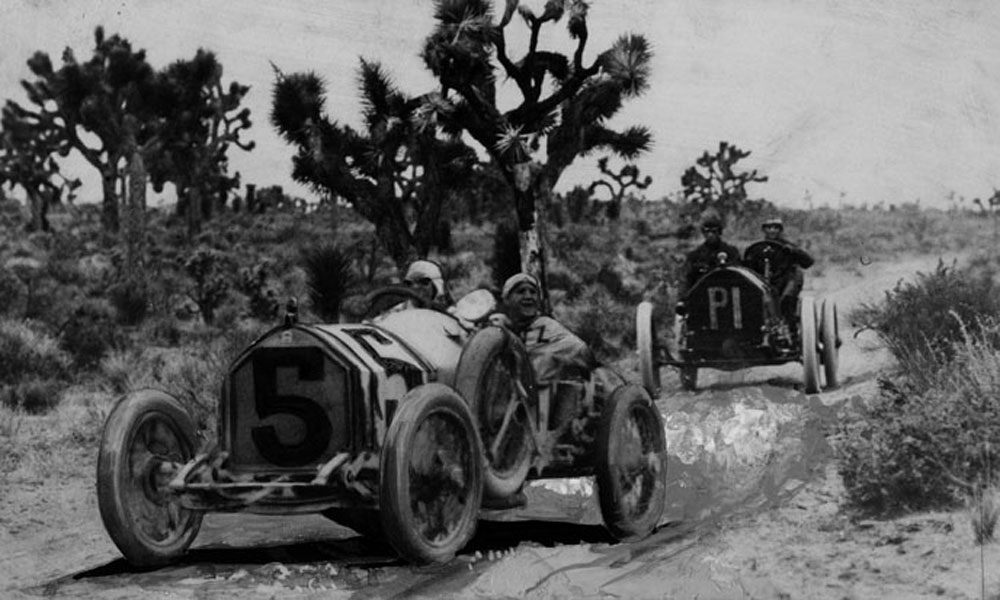 It wasn’t long after the first railroads crossed Arizona in the 1880s and many people in the territory had yet to take a ride on an iron horse when another marvelous marvel of the industrial revolution, the horseless carriage, sputtered and jerked into the region. With the gas buggies came the demand for better roads. Arizona’s rugged terrain didn’t lend itself to good roads and as late as 1929 there were still less than 300 miles of paved highway in the state.

Daring, devil-may-care drivers staged road races across the southwestern deserts to promote the building of better roads. Races were run between El Paso and Phoenix and Los Angeles to Phoenix. They were also run inside Arizona, the most popular being from Prescott to Phoenix and Tucson to Phoenix. In 1910 an adventuresome lady from Prescott named Harriett Fay Southworth striped down an automobile and raced against all men. She won the race, completing the journey in six hours and thirty-three minutes.

The best known were the road races from Los Angeles to Phoenix. Billed as Cactus Derbies, they were staged between 1908 and 1914 attracted such racing daredevils as the legendary Barney Oldfield, Lewis Chevrolet and Olin Davis. Drivers vied for the $2,500 prize money. The prize money wasn’t nearly as important—they left some $50,000 in auto parts scattered across the desert between Los Angeles and Phoenix it was the coveted title, “Master Driver of the World,” they sought.

The races followed a variety of routes. One went through Barstow, Needles, Kingman and Ash Fork, then turned south to Prescott, Skull Valley, Wickenburg and on to Phoenix. Another went through Blythe, forded the Colorado River on a ferry, then on to Salome and Phoenix. The third alternative went from Palm Springs to Brawley and Yuma before heading to Phoenix, now billing itself as the “Speed Capital of the World.”

They combined all the elements of a Keystone Kops movie, a melodrama and a convention of Jaycees, competing on roads that were no more than wagon trails. Keep in mind there weren’t any gas stations of garages on the 500-mile stretch of barren desert. Drivers strapped on spare parts and gas cans for the long journey. They raced against the clock so each evening the race ended in some town and the cars were impounded under guard in a local horse corral to keep mechanics from making repairs or tampering with a competitor’s race car.

The 1908 race was won, much to the chagrin of gas-powered advocates, by a steam-powered car in the time of thirty hours and 36 minutes or an average speed of 17.6 mph.

One of the most exciting of these Cactus Derbies was the one in 1914. The drivers left Los Angeles in a driving rain storm, headed for Needles, then up over notorious Oatman Pass to Ash Fork, before turning south to Prescott. Then it was across the rugged mountains to Phoenix, a distance of some 700 miles of potholes and sage. Ol’ Ma Nature did her best to make things tough, hurling rain, sleet and snow on the drivers.

Boosters, racing enthusiasts and groupies wearing colorful costumes followed the action in the comfort of a railroad train dubbed the Howdy Special. The Howdies took possession of the host town each night partying until the wee hours of the morning than re-boarded the train for to the next overnight stop.

East of Needles the drivers used the Santa Fe Railroad bridge to cross the Colorado River. Planks had been spread across the ties and any driver who slipped off was guaranteed a bumpy ride, not to mention the possibility of a bent rim or a flat tire.

Near Kingman, Bill Carlson’s Maxwell broke down. He walked into town to get spare parts and when he returned thieves had stripped his auto. That might the first such case in Arizona history.

Louis Chevrolet, driving a (what else?) was nearly done in by an overly helpful sheepherder at Seligman. Drivers used the same type cans for both water and gas and when he stopped to gas up, the helpful herder offered to help and unwittingly filled the tank with water.

Racing’s “Bad Boy,” the cigar-chomping rebel, Barney Oldfield, was the favorite. He navigated the rain-slick roads with the skill of an old muleskinner. He blew a tire near Kingman and had to drive several miles on the rim. His engine flooded crossing New River and his mud-splattered Stutz-Bearcat had to be pulled out by a team of mules.

In spite of all that he roared into the fairgrounds in Phoenix in a cloud of dust to finish first.

His victory was overshadowed by Bill Bramlett, who finished fifth. Had there been a prize for perseverance he would have gotten it hands down. Bramlett’s Cadillac wobbled across the finish line after a harrowing series of mishaps.  Earlier he’d slid off a mountain road near Wickenburg and done a perfect barrel roll, down the hill, miraculously landing right side up. A few miles later he bogged down in quicksand crossing the Hassayampa River and had to be hauled out. Just outside of Glendale he slid into a fence and broke his steering mechanism broke. The resourceful driver pulled up a couple of fence posts and tied them to the front wheels. By pulling the posts in unison, he managed to steer them down Grand Avenue on the final leg to the fairgrounds, crossing the finish line at the fairgrounds to the roar of appreciative spectators. Only seven of the 20 starters reached Phoenix.

At the victory banquet racing enthusiasts predicted the automobile would one day pass from being a plaything of the rich and sporting crowd to become a standard fixture in most families.