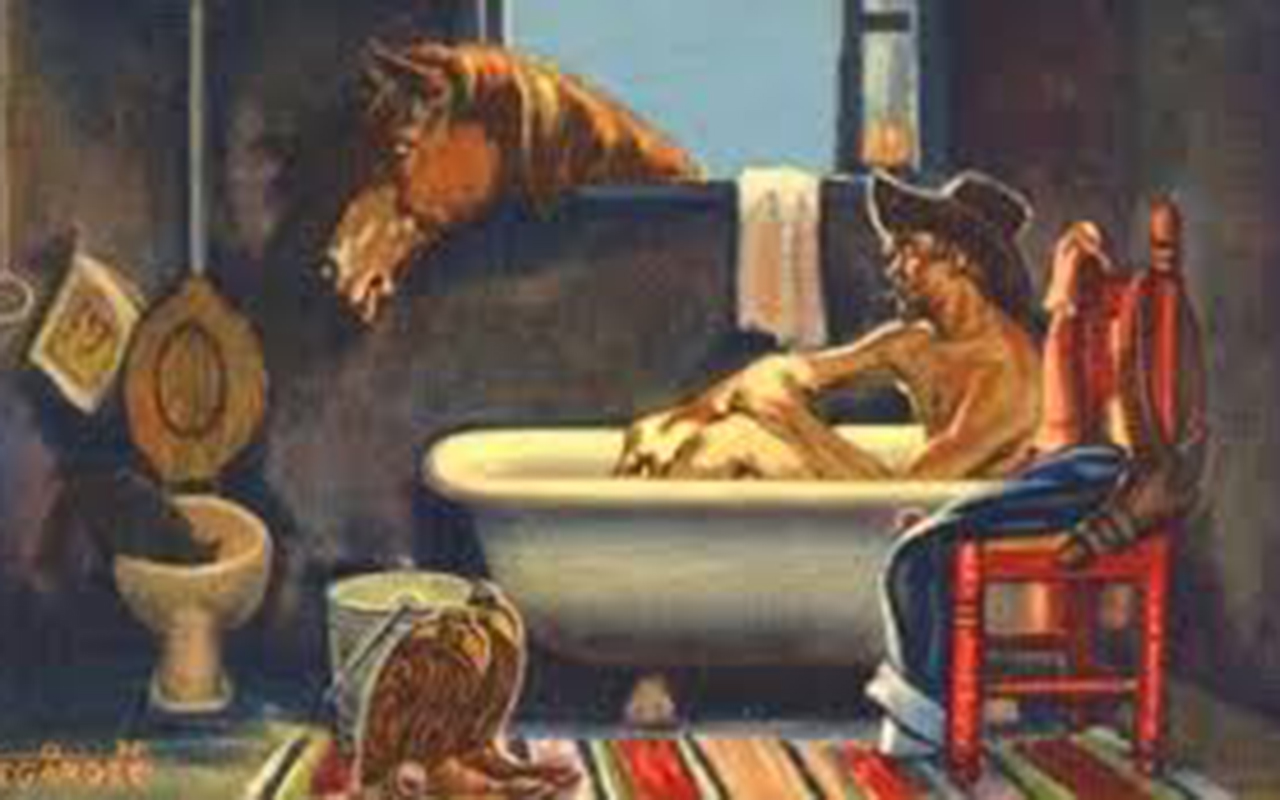 I was reading ‘Good Little Bad Man’, the story of Colorado Charley Utter. It was noted that Charley had the habit, thought odd at the time, of bathing daily. (Supposedly crowds used to gather to watch Charley do his daily ritual).

Good hygiene is a fairly recent thing. Taking a daily bath is a mid-20th century thing. It was also something women were more prone to do than men. Usually once a week was enough. Hence the term “Saturday night bath”?

Bathrooms with showers weren’t as common earlier and one couldn’t just walk into the bathroom and turn on the faucet and get hot water. It required heating the water and filling a wash tub. As a kid growing up in Ash Fork around 1950 we moved from a 2-room trailer with no plumbing into a house that had running water. We thought we were in hog heaven. Water pipes ran inside of the firebox and to heat water before taking a bath one had to chop wood, get a fire going in the wood stove, wait a few minutes then turn on the faucet in the bathtub. Needless to say, I don’t remember taking a bath very often.

How often a person bathed also depended on a number of things including availability of water and the time of year….During cold weather one could go longer without a bath.

Shampoo didn’t come into use until the 1920s and lye soap was hard on a woman’s hair so they seldom washed their tresses. In the real West a woman’s hair got washed about once a month and by then it was pretty oily and dirty. Only those buxom blondes in the Hollywood westerns had the luxury of having their hair washed with gentle shampoo.

A few years ago I wrote a story during the early 1900s titled “Saturday Night Baths,” about the Mascot and Western Mining Company near Dos Cabezas, Arizona. They imported several women from the company home office back East.

They created quite a bit of excitement among the male population as women were scarce as horseflies in December in those parts. The men decided to throw a dance on Saturday night to celebrate the arrival of the women and those eastern ladies did what they usually did before going out; they took baths.

Everyone had a good time and they couldn’t wait for next Saturday night to do it again. The next morning it was discovered the Dos Cabazes well had gone “dry,” and they had to shut down the mine for a couple of days until the holding tanks filled again.

The local editor reflected on the matter philosophically and decided the company needed to hire an engineer who could figure out how to get more water, especially on Saturday night because it was more important to keep the women in good operating condition than the mine.