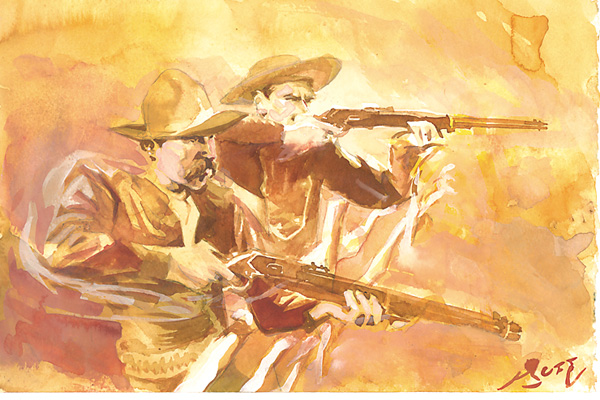 Who were the Haslett Brothers and how were they involved with the notorious Cochise County Cow-Boys?

You’re referring to Ike and Bill Haslett? They owned a ranch over in the Animas Valley, New Mexico that was coveted by one of the Cowboys, Bill Leonard. Leonard planned to either drive them out or kill them. He and Harry Head, along with some pals stopped at the store, got liquored up and bragged they’d come to kill the Haslett Brothers. Somebody got word to the brothers who decided that they’d turn the tables and choose the time and place for the showdown.

Remember, Leonard and Head were suspected members of the four outlaws who attempted to rob the Benson Stage on March 15th, 1881, killing the driver and a passenger.

On Friday, June 10th, 1881, the Haslett brothers arrived at the local store and set up an ambush and when the smoke cleared Head was dead and Leonard, mortally wounded.

Jim Crane and a dozen or so vengeful Cowboys then brutally murdered the Haslett’s.

Crane, another Benson Stage robbery suspect, would be killed along with Old Man Clanton on August 12 by Mexican vaqueros who were bent on recovering cattle stolen from them by the Cowboys. This was one of a series of events that led directly to the Gunfight Near the OK Corral.