Johnson Canyon Johnson Canyon was blessed or cursed with a stretch of extreme hard basalt rock that required blasting a way through and building the tunnel. 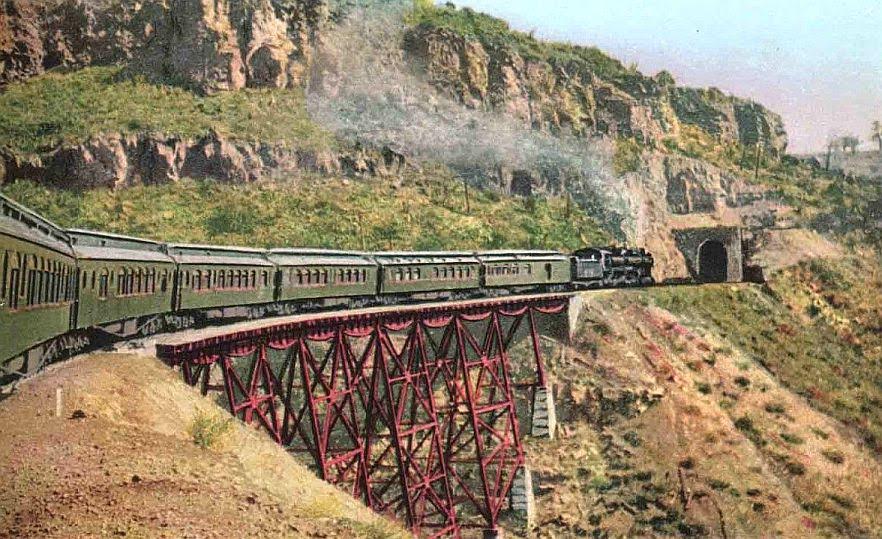 Johnson Canyon, located between Williams and Ash Fork, Arizona on the Santa Fe Railroad (Nee) Atlantic and Pacific RR turned out to be the most difficult stretch on the Santa Fe Mainline that ran along the Thirty-Fifth Parallel from Kansas City to Los Angeles.

Johnson Canyon was blessed or cursed with a stretch of extreme hard basalt rock that required blasting a way through and building the tunnel. It was the only one west of Albuquerque.

Work on the 328-foot tunnel began in April, 1881 and wasn’t completed until the following April. As soon as it was completed construction began on two trestle bridges. It was the only segment on the line in Arizona that required two. Cost of the average mile on the mainline through Arizona was $10,000 however, Johnson Canyon averaged $75,000.

The trestles were taken out in the late 1940s and a landfill was built in its place.

James T. Simms was awarded the contract to do all the work at Johnson Canyon. The construction camp, called Simms, was built on a bluff some 200 feet above the construction site. It was a wild and wooly place that boasted everything except a church and a jail. It housed 1,500 to 3,000 workers, more people than the population of Williams.

During World War II, a machine gun nest was posted on the site of the ghost town to protect the tunnel and the trestles from saboteurs.

One newspaper mentioned Simms hired 1,500 Welshmen in Albuquerque. Wages: Laborers $2.50 a day; Rockmen, $2.60 a day; Board was $5.50 a week. Summer temperatures were mild with monsoon showers in July through September. Winters were cold and wet.

The scarcity of water was a great hindrance there and for five months it cost $125 a day to haul water for the force engaged in building this road.

It’s not surprising that lot of alcohol was also consumed, and there were several killings. On January 30th a drifter named Jas Casey and Bill Ryan an employee were drinking one night in a saloon. Apparently, for no reason when they got outside Casey pulled a pistol and shot Ryan to death. He then barricaded himself inside the saloon and prepared to make a stand but one of the workers gunned him down.

There were two general stores, at least three saloons and a stagecoach that ran from Prescott to Simms and on to Williams.

The steep grades and narrow canyon presented challenges but also lack of law and order, alcohol and inadequate safety provisions put more than a few in the graveyard. Today only one headstone remains.

By late 1882 the railroad was operating through Johnson Canyon and Simms had become a ghost town.

Heading eastbound up the 1,000-foot climb up the canyon required two helper engines to push the freight trains. Coming down the canyon was another matter. The engineers had to brake hard when making the curve in front of the tunnel and the pressure could cause the rails to buckle, resulting in derailments and wrecks. The bottom of the canyon is still strewn with parts of wrecked trains.

The Santa Fe abandoned Johnson in 1960 for a line across the prairie north of the canyon. Today, diesel engines roll along at 70 mph. on the new line where they used to average 6 mph going up the canyon.

Just west of Johnson Canyon, the bustling town of Ash Fork was born in 1882. The railroad crossed Arizona reaching Needles in August, 1883.

During World War II the Army posted machine gun nests around the tunnel to protect it from saboteurs.

Postscript.
My father was a fireman/engineer on the Santa Fe. We moved to Ash Fork in 1947. We rode those passenger trains up and down Johnson Canyon many times, never knowing the history of the canyon until many years later.