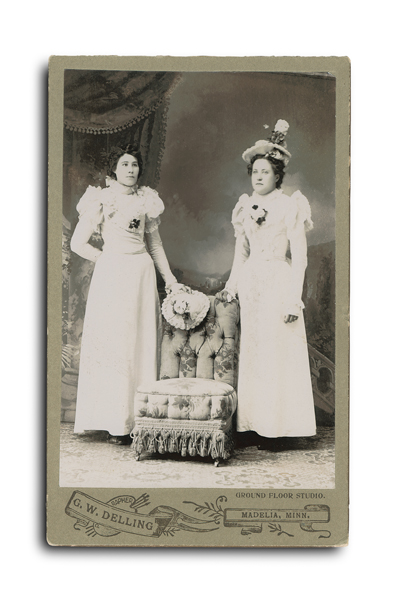 One emotion permeated the United States in the second half of the 19th century.

It wasn’t greed for gold or lust for land—it was loneliness.

The nation’s gender geography was all out of kilter. In the West were thousands of unattached men who’d left everything behind to seek their fortunes. In the East were most of the women—and the Civil War would only compound the problem by leaving behind so many grieving widows and girlfriends.

Such a drastic imbalance needed to be fixed. Thanks to American ingenuity, an entire industry grew up in matching lonely men and women through the mail, as Chris Enss notes in Hearts West: True Stories of Mail-Order Brides on the Frontier.

“By the early 1850s, western adventurers lifted their heads and looked around and realized one vital element was missing from the bountiful western territories: women,” Enss writes.

As a California paper pleaded in 1851, “We want an emigration of respectable females to California: of rosy-checked ‘down east’ Yankee girls—of stout ‘hoosier’ and ‘badger’ lasses, who shall be wives to our farmers and mechanics, and mothers to a generation of ‘Yankee Californians.’”

But convention and custom had to be overcome for such a daring and bold effort. These were the days when women were strictly chaperoned and courting was a most genteel exercise. Crudeness was considered disgusting and brazenness was totally unacceptable. It takes one’s breath away to learn how far out on the limb men and women were willing to go to embrace matrimony. The story of mail-order brides is a testament to what a powerful motivator loneliness can be.

It seems apropos that both a woman and a man would attempt to make a business out of the loneliness.

Eliza Farnham, a widow and mother, arrived in the Gold Country of California in 1849. “Shocked by the dissolute lives of the largely male inhabitants of California,” Enss notes, “she conceived a plan to bring proper ladies to the West, which she saw as badly in need of the civilizing hand of women.”

In February 1849, Farnham ran an advertisement in New York papers, and some 200 women responded.

Her efforts were applauded and encouraged by many, including news-paperman Horace Greeley, who wrote: “The mission is a good one, and the projector deserves success. The enterprise in which Mrs. Farnham has engaged is one which evinces much moral courage.”  He was very interested in her “precious cargo” and prayed “May favoring gales attend the good ship Angelique,” which left New York for San Francisco in April.

Meanwhile, the Daily Alta California reported with much joy, “Eliza Farnham and her girls are coming, and the dawning of brighter days for our golden land is even now perceptible.”

Word spread that she was bringing 10,000 eligible ladies back with her. But when the ship arrived, she was accompanied by only three women. The disappointment was so severe, the men of San Francisco went on an unprecedented drunk, if that seems at all possible for a society where drunkenness was a way of life. But eyewitnesses reported they’d never seen so much “bad behavior”—drunkenness, gambling, fighting.

It was convention and custom that scuttled Eliza’s efforts. “Many socialites considered it a scandalous plan,” Enss writes, “and the campaign was mired in controversy. Rumors that Eliza was little more than a procurer ultimately kept many women from committing to the journey.”

Farnham went on to live her own life and raise her children, and never again tried to play matchmaker. But she will always be remembered as one of the first to recognize how important women would be in taming and settling the West.

Not long after Farnham’s disastrous effort, Asa Mercer tried the same thing for the men of Washington Territory. He raised money, and in 1864 brought the first shipload of women to Seattle—but only 11 women arrived with him and the same kind of disappointment was shown. He launched a second trip two years later, but he squandered much of the advance money. Although he had a larger offering this time of his “Mercer Maids,” his business was over. Asa married one of his Maids, who gave birth to their eight children.

But these efforts showed it was easier said than done to organize young ladies with the means and the grit to go west for a husband. And while some came on their own in wagon trains, the  imbalance remained, which led to a far more direct avenue of mail-order courtship.

As lonely men and women began to realize, advertising yourself could be very effective.

The Matrimonial News—a weekly published in San Francisco and Kansas City—was the major, legitimate lifeline for the lonely in the 1870s, ’80s and ’90s under its banner: “Women need a man’s strong arm to support her in life’s struggle, and men need a woman’s love.”

Enss estimates that during its three decades, the paper was responsible for some 2,600 couples getting together.

She includes several examples of ads printed in the Kansas City edition in 1887, and they give a good glimpse of this phenomenon:

• “A gentleman of 25 years old, 5 feet 3 inches, doing a good business in the city, desires the acquaintance of a young, intelligent and refined lady possessed of some means, of a loving disposition from 18 to 23 and one who could make home a paradise.”

• “I am fat, fair, and 48, 5 feet high. Am a No. 1 lady, well fixed with no encumbrance: am in business in city, but want a partner who lives in the West. Want an energetic man that has some means, not under 40 years of age, and weight not less than 180. Of good habits. A Christian gentlemen [sic] preferred.”

Not all publications were as legitimate as the Matrimonial News or The New Plan, which was printed from 1911-17. Some fly-by-night outfits cheated men and women out of money spent on fees and traveling.

And not everybody was honest in their ads. While Enss reports many of these mail-order marriages were successful and happy, some certainly didn’t make the grade.

The Matrimonial News even printed “warnings” that some were being deceived in their quest for a mate. In 1873, according to an ad, a “judge” issued a ruling that unhappy grooms could have their marriages declared null and void if they had been “seduced by the use of false hair, cosmetic paints, artificial bosoms, bolstered hips or padded limbs.”

The men weren’t the only ones being conned. You have to feel sorry for Eleanor Berry, a California schoolmarm who answered an ad in San Francisco Magazine in 1873 for a wealthy, average-looking guy who wanted to settle down. After corresponding, the couple decided to meet.

Eleanor rode by stage to meet her suitor in Grass Valley, but her trip was interrupted when hoodlums robbed the stage. As they tried to blow up the strongbox that held thousands of dollars, Eleanor pleaded with them to save her valise, since it had all her earthly belongings, including her trousseau. One of the bandits did her the favor of removing her luggage. As he pulled it down, she noticed a long, jagged scar on his hand.

The stage eventually reached her destination, and she dressed to meet her fiancé. Imagine her horror when the man who walked in had a long, jagged scar on the back of his hand. She fled and went home.

The joining of Phoebe Harrington and William Silbaugh is one of joy. The two were married an hour after meeting and enjoyed 47 years of marriage and seven children.

But how many mail-order brides had the same motivations as Constance Ranney, who left her Maryland home for Oregon in response to an advertisement of “Brides Wanted.” She attended a public meeting in her hometown of Ellicott City to learn more and wrote home to her uncle about it: “Such a challenge was being presented—to go to an uncivilized land and make it civilized. Then it struck me. If I don’t do this I will spend my entire life working as a servant for the rich here.” She also realized the West offered an equalizing that wasn’t available in the East: Many of the girls at the meeting came from families “that would never have me in their parlors because I’m a servant. In Oregon, we will all be the same, just women looking for husbands. None of us any better than the other.”

Constance did make the trip, and her journal of the journey survives. The journal ends, though, when she reached land so it’s unknown what happened to her. Enss reports that most of the women on the trip did find a husband.

While all this was going on, Asian men were relying almost exclusively on mail-order brides from back home. Known as “picture brides,” this is how the first Chinese and Japanese women came to America.

Mail-order brides are still a thriving business to this day. It’s estimated that some 12,000 couples a year get together by this system, with the women coming to America mostly from Russia, the Ukraine and the Philippines. While some of these unions are undoubtedly successful, there’s also widespread concern about the women being exploited and abused.

They had a way of handling that problem in the Old West. On meeting their intended, men were often asked to sign a witnessed agreement not to abuse or mistreat the bride-to-be. She, in turn, signed a witnessed promise not to nag or try to change the man.