Murphy Wagons Under Spanish rule any French or American trader who ventured into Santa Fe or Taos would be arrested and marched on foot to Chihuahua or even Mexico City and imprisoned. All that was about to change... 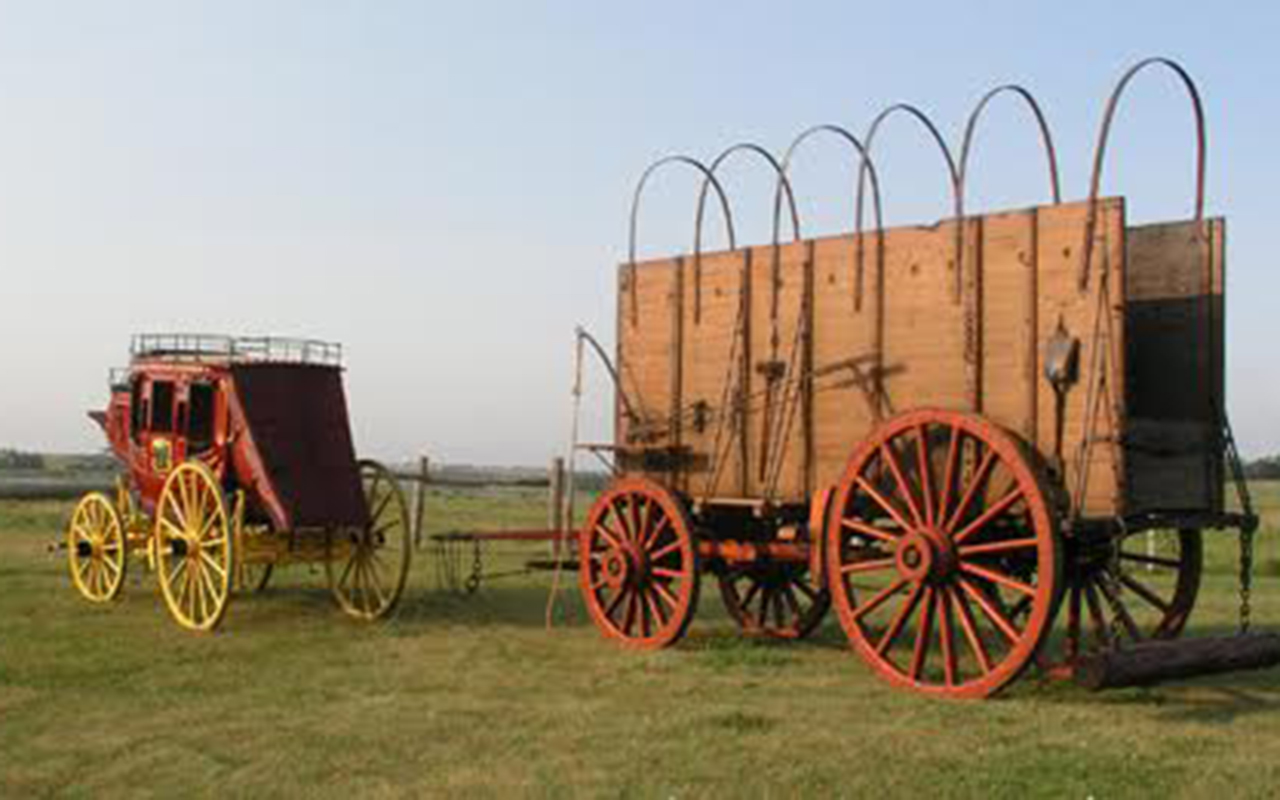 The storied Santa Fe Trail opened for business in 1821, a year that coincided with the birth of the Mexican Republic. The Mexican Revolution  brought about a major change in foreign policy toward their neighbor to the north. Previously, Spain forbade their colony, New Spain from trading with anybody but the mother country. The city of Santa Fe, long neglected by her capital, far to the south, expressed a strong desire to exchange trade goods with her American neighbor. This was a complete reversal of the old Spanish mercantile system. Under Spanish rule any French or American trader who ventured into Santa Fe or Taos would be arrested and marched on foot to Chihuahua or even Mexico City and imprisoned. All that was about to change.

Santa Fe was rich with silver, beaver pelts and buffalo robes, but they were starved for manufactured goods. One might say the U.S. provided, a combination of Walmart, Walgreens and Home Depot.

William Becknell was the first American trader to venture into Santa Fe after the revolution. Returning from his first expedition he arrived in Franklin, a little burg west of St. Louis, tied his mules to a hitching post, took his knife and slashed a leather bag hanging from a packsaddle and let the silver coin fall to the ground. Missouri was desperate for hard currency. A crowd gathered and the Santa Fe Trail was open for business. In 1822 Becknell led another caravan of traders down the trail to Santa Fe. This time they took wagons for the first time. About where Dodge City is today, they turned southwest where they nearly perished crossing the Cimarron Desert, sixty square miles of arid land with little vegetation, a shorter but near waterless trail. They might not have made it had they not come upon a stray buffalo that had drank its fill of water from the Cimarron River further southwest. They killed the animal, cut open it’s stomach and drank the water. That sustained them until they reached the river.

Becknell’s company returned to Missouri in the fall and reported a 2,000% profit. He sold a wagon in Santa Fe for $750 that he’d purchased in Missouri for one hundred and fifty dollars.

In 1824 Becknell headed for Santa Fe again, this time leading a party of 25 wagons, $30,000 worth of goods, 150 mules and horses. The caravan returned in the fall with over $180,000 in silver coin and $10,000 in furs. From this time until the coming of the railroads in the 1880s the Murphy, Conestoga and Pittsburg wagons rumbled down the trail to Santa Fe. Within a few years U.S. Army troops began escorting the wagons to the Mexican border at the Arkansas River, where they were picked up by Mexican cavalry who escorted them on to Santa Fe. Soon Mexican traders were engaged in the trade hauling furs, silver and buffalo hides to Independence and returning with American merchandise.

The Santa Fe freighters left Franklin around May 15, arriving in Santa Fe about the end of July and were back in Missouri by September. The journey was twelve hundred miles each way.

Upon arrival in Santa Fe the wagons were taken to the local customs house where they were inspected and taxed by local authorities. Whatever the tax might be and it fluctuated depending in the greed of the officials, it didn’t seem to matter much to the traders, for they simply increased the prices and passed the cost on to the consumer. This worked until a corrupt governor pushed the envelope.

Governor Manuel Armijo was arguably the greediest of the politicos. In 1839 he imposed a $500 tax on each wagon arriving in New Mexico. Now it was up to the Americans to counter his maneuver.

Joseph Murphy arrived in America from Ireland when he was thirteen, arriving in St. Louis where he apprenticed with a wagon-maker to learn the trade. He was a good student, learning how to judge the quality of the lumber just by the feel of the grain. He also learned how to build a quality wagon. Soon, he went into business for himself and in 1827 he sold his first wagon to a Santa Fe trader. It would be the first of many he would build for the trade. In time Murphy became the dominant wagon maker on the Santa Fe Trail. It’s believed his company built some 200,000 wagons, extending into the twentieth century.

After Governor Armijo placed his outrageous tax on the wagons Murphy decided to build, larger and sturdier wagons for the traders. He brought in a crew of skilled German-born craftsman. He used seasoned wood for his wagons and young saplings for spokes. Iron axels often cracked under the stress, so he built them of hard wood. When the wagons were finished, they were loaded on steamboats and taken upriver to Independence, rolled ashore and ready to hit the trail to Santa Fe.

These tall-sided freight wagons were truly giants on wheels, evolving from the Conestoga wagons, they measured fourteen to sixteen feet in length and could haul four to eight tons. The rear wheels of these goliaths stood well over a man’s head while the metal tires were doubled in thickness for lasting durability.

There’s little doubt the Murphy Wagons were intentionally aimed at increasing the amount of merchandise per load to help reduce the exorbitant tax burden Armijo placed on the freighters. It’s also doubtful that any of those taxes he collected ever trickled down to the citizens of Santa Fe.

All in all the business was advantageous to both sides. The Americans had a great need for those sturdy Mexican mules, Jacks (donkeys) and silver. The Mexicans, far from the industrial centers of their homeland, were always short of essential items for day-to-day living. Many of the traders never returned to their homeland to stay but rather, chose to remain in the Southwest. Many married Mexican women and raised families, becoming prominent businessmen, forming a fine blending of cultures that is characteristic of the Southwest today.