Smallpox Among the Plains Indians Did the U.S. Army intentionally infect the Indians to cause the Great Smallpox Epidemic of 1837? 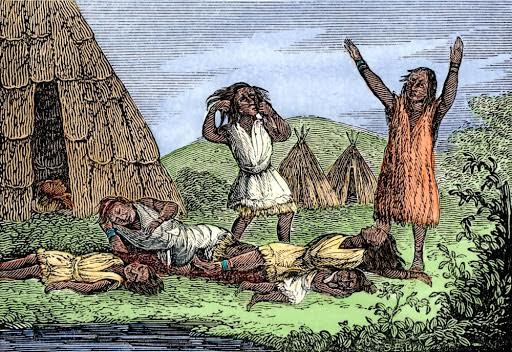 A few years ago an activist wrote a revisionist history about the Great Smallpox Epidemic of 1837 claiming the U.S. Army deliberately infected a boatload of blankets shipped from a smallpox infirmary in St. Louis that were to be delivered to the Indians along the Missouri River, resulting in the deaths of tens of thousands of Native Americans. Another charge was the presence of medical teams in the area releasing infected natives to mingle with the uninfected. There was no evidence to prove any of these charges.

Similar stories have circulated through the years. They make good fodder for agitators and revisionists but did something like this really happen? There is a possibility something like this happened by individuals as there was a lot of skullduggery ranging from poisoning to paying bounties for scalps. There are stories of traders spreading fear among the natives by claiming a mysterious bottle they were carrying contained the deadly smallpox virus and threatening to use it on a village. There’s absolutely no provenance the U.S. Government ever practiced genocide or deliberately infected people with infectious diseases.

The smallpox epidemic of 1837 has been written about many times by historians, but none had ever accused the Army of germ warfare. Truth is, the Army was nowhere in the area where the epidemic broke out. Fort Clark, where the Army supposedly conducted this germ warfare was not a military post it was the property of the American Fur Company, civilian trading post.

Historians agree the smallpox was carried up the Missouri River to Fort Clark in June 1837 by passengers on Captain Bernard Platte’s American Fur Company steamboat. The St. Peters was making its annual voyage delivering goods to the company trading post along the river. Joshua Pilcher, the Indian Bureau’s sub agent got off the boat at Fort Kiowa, prior to its arrival at Fort Clark. He penned a letter to his boss, William Clark, saying there were some passengers carrying the disease, including three Arikara women. The three got off the boat at Fort Clark and joined their people living nearby. That evening there was a party at the Mandan village, attended by several people from the St. Peters.  There would have been mixing and mingling among the infected and the non-infected. One must wonder why Captain Platte didn’t quarantine those who were sick and why did he refused to quarantine the afflicted passengers. One assumes he didn’t want any delays preventing him from keeping his schedule.

There is a preponderance of evidence that the disease was spread human to human rather than infected blankets.

A brief history of vaccination and vaccine: Lady Mary Wortley Montague introduced the principle of vaccination to England somewhere around 1715. By about 1750, the whole English army had been inoculated against smallpox and, by 1780, George Washington had ordered that his Continental Army be inoculated as well.

The smallpox vaccine, introduced by Edward Jenner in 1796, was the first successful vaccine to be developed. American Indians were being vaccinated for smallpox but the tribes above the Arikara on the Missouri River were not inoculated.