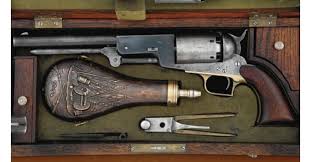 Despite the popularity of the Colt revolver among Texans, Colt’s company failed in 1842. Realizing the revolver needed more durability for use on the frontier; Sam Walker set about designing a more formidable weapon and took his plans to Mr. Colt.

When the Texans requested more weapons, Colt had to advertise for some of his own creations as he’d sold or given away all his samples. They gathered a few old Patterson’s and began work on a weapon to meet Walker’s specifications. The result was the famous model 1847 Walker Colt, a .44 caliber pistol weighing 4 lbs. 10 oz. Unlike the Patterson, it had a trigger guard and had only five moving parts. Carrying six rounds in the cylinder, the Walker was the West’s first six-shooter. More like a hand cannon than a pistol, it fired a 219-grain bullet with 50 grains of black powder.  It was the most powerful pistol ever built until the introduction of the .44 Magnum. One of the drawbacks of the Walker Colt was that it was so powerful that on occasion it would blow itself apart.

Before the advent of metallic cartridges in the 1850’s, the re-loading of cap and ball pistols was slow and could have fatal results. Consequently, westerners carried extra cylinders loaded and ready to go. There were many ways a man could get his whiskers singed–or worse. Stray powder around the cylinders could set off a chain fire where all the cylinders fired at once. To prevent this grease was packed in the chambers with the charge. Many a frontiersman earned the nickname “Broken-hand” or “Black-face” after his weapon blew up on him.

The Mexican War created a new demand for Sam Colt’s revolvers. The American government ordered one thousand Walkers, reviving the company. Colt had no production plant so he enlisted the aid of Eli Whitney to manufacture the revolver.  Eleven hundred pistols were actually produced. The Colt revolver was destined for greatness and Sam Colt’s pistols became the most sought-after in the world. His niche in history was assured. Soon Colt was able to open his own plant and introduce a new model, the 1848 Dragoon. This pistol was slightly modified from the Walker and fired a 40-grain bullet. Sam Walker wouldn’t live to see the revolver he godfathered become a western legend.

General Zachary Taylor promoted him to a captain in the regular army as a reward for his bravery at the battle of Palo Alto and Resaca de la Palma. Despite his appointment as an officer in the U. S. Army, the unpretentious Texan would remain best known as simply, “the Texas Ranger.”