The Birth of the Colt Revolver 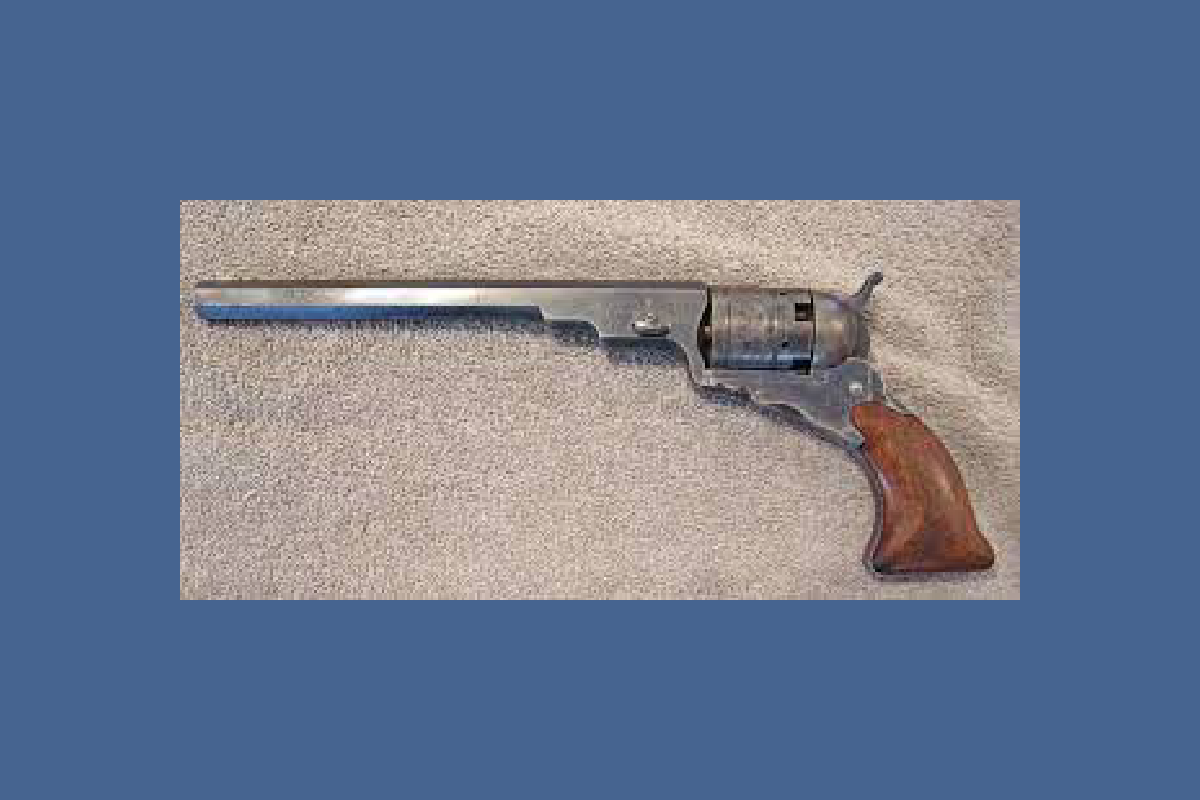 In the years before the 1840’s the favorite side arm was a knife, and the big guy with long arms had a distinct advantage. Before the coming of the “Equalizer” or revolver and repeating rifle the Indians boasted superior firepower with bows and arrows. A warrior could unleash 12 to 15 arrows in the time it took to reload those single-shot muzzleloaders and they cleverly timed their attacks accordingly. But, Sam Colt’s new revolving pistol made all men equal.

He got the idea for a revolving cylinder while traveling on board a sailing ship. He noticed the pilot’s wheel spokes always returned in perfect line with a clutch that locked the wheels in position with any spoke that was in line with it. Applying this principle to a revolving pistol, the cylinder would bring the chambers in line with the hammer and barrel through which they would be discharged. He patented the new invention in England in 1835.

Army intelligence (oxymoron?) was still living in the 17th century when it came to rapid-fire weapons. The aged brass hats at the top, those who were inclined fight the next war the same way they fought the last one, didn’t believe common soldiers were intelligent enough to shoot anything more complicated than a single-shot muzzleloader and weren’t interested in the newfangled contraptions. Finding buyers wasn’t easy but Colt did sell a few to the Texas Navy in 1839. Some of these found their way into the hands of the legendary Texas Rangers who were waging war on the Texas plains against the formidable Comanche and Kiowa warriors.

The first Colts, produced between 1836 and 1841 were the .36 caliber Paterson model “belt” or “holster” revolvers. Calibers ranged from .28 to .36 and were manufactured at Colt’s plant in Patterson, New Jersey. They came in barrel lengths ranging from 4 to 12 inches but the 7 1/2 and 9-inch were the most popular. They were fragile and fired only five rounds. Still, they proved to be effective in warfare against the Indians.

In January, 1844 Sam Houston informed Texas Ranger Captain Jack Hays, the Texas Navy was being taken out of service and had a supply of Colt Revolvers. Hays, the man the Comanche called “Devil Jack” secured them for his Rangers and just in the nick of time. On June 8th the Colt carved its niche in Texas history. Hays and fourteen Rangers each armed with two revolvers stood off eighty whooping and hollering Comanche in the Texas Hill Country at the Pedernales River, also known as the Battle of Walker’s Creek, killing thirty while losing only two killed and five wounded.

During the battle, Captain Hays and his small force of Rangers fired their rifles, and then jumped into their saddles. Captain Hays yelled “Charge” and the tiny band of men rode right into the middle of the surprised warriors firing their pistols and generally raising hell. The Comanche were used to the Texans getting into defensive positions and were unprepared for the charge.

There has been some dispute about which battle Captain Hays and his Rangers first used the new revolver, but this is the first time an entire company war armed with them.

One of the wounded was a man named Sam Walker. Walker, whose body was pierced by a lance, was not expected to live but managed to survive. He wrote Colt praising the revolver mentioning that the Rangers “confidence in them is so unbounded, so much so that they are willing to engage four times their number.”

He went to Patterson, New Jersey and was co-designer of the famous “Walker Colt.” During the Mexican War, Walker became a national hero before his death at the Battle of Huamantla on October 9th, 1847.

Post Script. My gg grandfather, Moses Trimble served with the Texas Mounted Volunteers under Colonel Jack Hays, Lt. Col. Sam Walker and Captain William “Big Foot” Wallace during the Mexican War. After the war, when he returned to San Antonio, he named his first-born son, Sam Walker. Since that time there has been a Walker in the family.