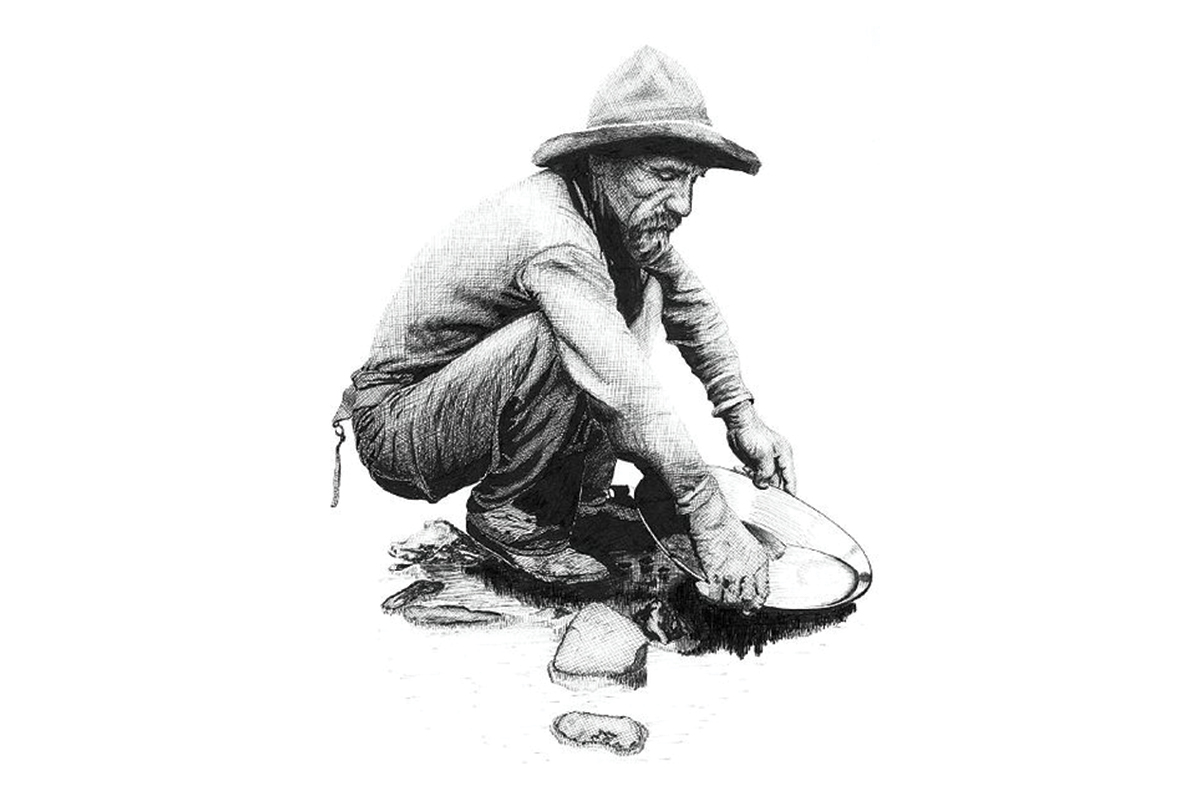 On January 24th, 1848, James Marshall was constructing a tailrace for a lumber mill on South Fork of the American River. During the previous night, Marshall had diverted water through the mill’s tailrace to wash away loose dirt and gravel and on that fateful day, he noticed some shining flecks of metal left behind by the running water.

It was a defining moment in American history. It was the first of what turned out to be the richest treasure trove of natural resources in the history of the civilized world. With a single lucky break a person could be rich beyond their wildest dreams. And for the first time in history the finder got to keep what he found.

Beginning about 200 million years ago massive shifts of the tectonic plates that encircle the earth caused the sea floor crust to be pushed beneath the American continent, where it heated up and melted into huge molten masses of magma. The molten rock forced its way upward through the crusts and slowly cooled to become the granite rock that makes up most of the Sierra Nevada today. Water percolated into the ground into the Mother Lode region. Following fractures and cracks left by millions of years of geologic mayhem, the water came closer to the hot molten magmas. At these elevated temperatures, water dissolved the otherwise stable materials including quartz, gold, silver, copper and zinc.

Twice in the last hundred million years the Sierra Nevada rose into a mighty mountain range only to be attacked by the forces of erosion, water, ice and wind. Many thousands of feet of rock were stripped away and the gold veins were exposed to the elements. Rivers carried fragments of gold downstream into the great valley. During the most recent mountain building episode, which began within the last 10 million years nature took its patient course. The gold broke away from the veins washed into the streams and in places where the water slowed the gold dropped down to the bedrock to lay undisturbed for a few million years waiting to be discovered by human beings who placed great value on the strange metal.

Placer gold has already been “mined” by Mother Nature. It was usually found in a streambed, down near the bedrock.  Pick it up and stick it in your poke sack. Lode gold was still in the ore and had to be mined from the ore. Unlike medals such as silver and copper, Gold occurs fairly pure in nature.

Gold is 19.3 times heavier than water and 6 times heavier than the other materials commonly found in streambeds. Gold is so dense that a cube weighing one ton is just a little over 14” on a side. Gold is malleable, doesn’t tarnish or rust. Gold doesn’t corrode and can be melted over a flame, making it easy to work with and stamp as a coin or jewelry. Since prehistoric times. Alchemists have tried unsuccessfully to reproduce it. Gold is the metal we fall back on when other forms of currency don’t work, which means that gold will always have value in hard as well as good times. It’s been treasured dating back to prehistoric times.

California’s Mother Lode was extraordinarily productive. Statistics, indicate that from 1848 to 1967, California was the source of more than 106 million troy ounces of gold — by far the most of any state in the union. (In Troy measurement, 12 oz. equals one pound)

There was 400 million dollars in gold mined between 1849 and 1855. There’s still plenty of gold in them thar California hills. On Christmas Day in 1992, a gold nugget weighing 44 troy ounces was found near Jamestown in Tuolumne County. In 2016 another Jamestown prospector found a gold nugget the size of a T-Bone steak.