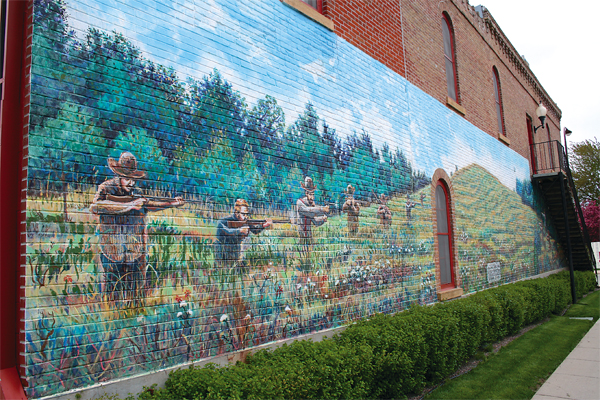 Robbing the First National Bank in Northfield, Minnesota, wasn’t the best career move The Boys ever made.

The Boys included Frank and Jesse James, who made it out of Minnesota. Their colleagues didn’t fare so well. Bill Stiles (or Bill Chadwell, if you prefer) and Clell Miller got shot down on the streets on that September afternoon in 1876. Two weeks later, Cole, Jim and Bob Younger and Charlie Pitts got shot to pieces at Hanska Slough near Madelia. The Youngers survived; Pitts didn’t. Two Minnesota citizens also fell during the botched robbery: Nicolaus Gustavson was killed in the streets during the fracas and heroic teller Joseph Lee Heywood was murdered after refusing to open the safe.

Sensational? You bet. Americans love a bloody bank robbery. We remember Coffeyville, Kansas. We remember the Daltons, John Dillinger, Bonnie and Clyde and, naturally, the James-Younger Gang. Why else would Brad Pitt play Jesse?

Northfield? Here’s a town founded on the principles of abolition, temperance and other wholesome ideologies, a city with two renowned universities, but many people know it only for September 7, 1876.

“We just happen to be lucky enough to shoot a bunch of bad guys of relative note,” says Mark Fagerwick, then-executive director of the Northfield Historical Society and Museum Store, housed in the historic Scriver Building that in 1876 was home to the First National Bank.

Sensational? You bet. But Northfield and the surrounding community are anything but sensational when promoting history. Oh, you may pick up an Outlaw Trail brochure at the Northfield Area Chamber of Commerce. And, sure, the September re-enactment of the bank robbery, first held in 1948, draws an estimated 100,000 spectators. Yet keep in mind that the event is called “The Defeat of Jesse James Days,” held on September 6-10 this year, which focuses on the heroic defenders, not those bushwhackers. Having just performed in Germany in May, even Northfield’s modern-day James Gang serves as an international ombudsman for the city “in a very strange kind of way,” gang leader Chip DeMann says.

Downtown Northfield isn’t dotted by historical markers noting that Clell Miller bled to death here or Henry Wheeler made his killing shot here. Things are low-key. No cheesy gifts (unless you count the cute Jesse James bobblehead doll at the museum). No Joseph Heywood Blue Plate Special. Closest thing I can find to that are the Jesse James and Frank James burgers at Boonies Beef and Brew in Millersburg.

Nor did The Boys limit themselves to Northfield. They almost robbed the bank in historic Mankato, and they certainly got around southern Minnesota during their sojourn here. Millersburg. Red Wing. St. Paul. Albert Lea. Minneapolis. And don’t overlook Madelia.

“The Northfield posse was after the gang for two weeks,” says Les Johnson of Madelia’s Younger Brothers Committee. “Within eight hours after we got word they were around here, we had them shot up and locked up.”

In Madelia, you’ll find a mural depicting the shoot-out, dedicated in 1998, at the Chamber of Commerce. In nearby Hanska Slough, two historical markers record the capture of the Youngers. Plus, Madelia celebrates the Tenth Annual Younger Brothers Capture on September 15-17.

Sensational? Perhaps. Yet sensationalism can lead to tourism dollars. The Boys might bring people to Northfield and Madelia, but once they’re there they’ll find out what these towns are really about.

“Even without that story, we’d still have a good story to tell,” Fagerwick says.

They’re telling it, too, in Northfield and Madelia, and telling it well.