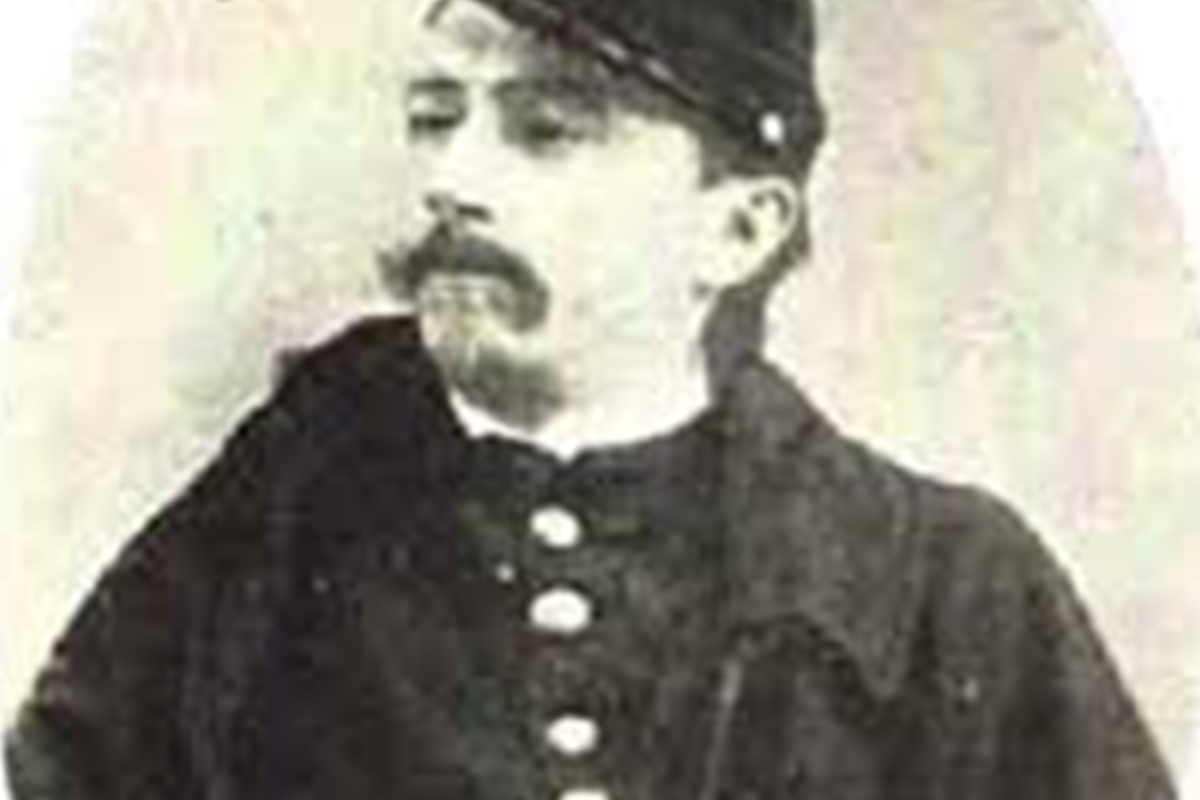 There were many brave officers in the Frontier Army during the darkest days of the Apache campaigns in the late 1860s and early 1870s but none braver than Lieutenant Howard Cushing. He was a member of one of America’s most famous family of war heroes that included brothers, Milton Jr., Alonzo and John Cushing.

Their father, Dr. Milton Cushing Sr. received his medical degree and settled in Zanesville, Ohio where he married his first wife Abigail. They had four children. She died in 1833. Three years later he married Mary Smith and they would have five children, Milton Jr., Howard, Alonzo, John and Mary. He died of tuberculosis in 1847 leaving her penniless and nine children to raise. Abigail’s children were nearly grown. Eventually Milton Jr. and Howard would take jobs to help support the family. When war came in 1861, all of Mary’s four boys joined the Union cause. Mary would outlive all her four sons.

Alonzo, a graduate of West point, was killed on Cemetery Ridge at the Battle of Gettysburg in 1863 and received the Medal of Honor. He was buried at West Point.

John was a graduate of the Naval Academy.  On October 27-28, 1864 he led a daring commando raid, sinking the Confederate Ironclad, CSS Albemarle. John’s health failed, he died in 1874 and was buried at the Naval Academy.

Howard Cushing’s reputation as a relentless Indian fighter was well-established long before he arrived in Arizona. During the Cochise War, he was the Army’s most energetic and successful soldier. For more than a year, he led countless scouts through Apacheria. He had that rare quality that made him a natural leader of men. His troopers idolized him and would “charge hell with a bucket of water,” for him. His fellow-officers held him the highest regard. His fighting skills were such that he was kept in the field constantly, pursuing wherever and whenever needed. Captain John G. Bourke, who served with him in the Third Cavalry, in his classic history of the Indian Wars, On the Border With Crook, called him, “the bravest man I ever saw.”

Troop F had several skirmishes with the Apache in early 1871, striking their rancherias in the Pinal and Santa Catalina Mountains burning their wickiups, supplies and driving them out in the winter weather. They hit two more north of the Gila. Again the Apache was burned out of their dwellings and suffered heavy casualties. The aggressive young lieutenant had caught the attention of the Apache leaders including Cochise, Geronimo and Juh.

In the spring of 1871 he was ordered to move his Troop F, 3rd Cavalry from Camp Grant on the lower San Pedro River to Fort Lowell, on Rillito Creek near Tucson and meet with Governor A.P.K. Safford who gave him free rein to conduct a search and destroy missions to scour the mountains and valleys of southeast Arizona.

Cushing’s patrol departed from Camp Grant on August 26th. His troop consisted of Sergeant Tom Mott and sixteen privates. The chief civilian packer was Cushing’s English friend, William Simpson. Their mission was to scout the Sonoita and Santa Cruz Valleys and the mountains near the Mexican border. He believed Cochise was the chief cause of most of the violence in southeast Arizona and he made it his mission to get him.

They headed in a southeast direction, arriving at Cienega Ranch, the site of the old Butterfield Stage Station about thirty miles east of Tucson and three miles west of Pantano. The next day they rode south to Camp Crittenden, on Sonoita Creek, arriving late that afternoon. After covering 65 miles in two days, Cushing decided to rest the horses and pack mules for a day.

On April 30 they left Crittenden and rode south to Pete Kitchen’s ranch at Potrero, just north of today’s Nogales. Kitchen was one of the most famous Indian fighters in Southwest. His ranch located on one of the Apache Plunder Trails into Mexico was a veritable fortress. Raiding Apache had suffered such devastating casualties trying to destroy it they finally gave up and avoided going near it.

Troop F broke camp at five A.M. on the morning of May first. Kitchen volunteered to guide them through the mountains that separated the Sonoita and Santa Cruz Valleys. Troop F turned south, crossed the Mexican Border and spent the night at the presidio at Santa Cruz. Cushing learned from the Mexican comandante that Apaches had been seen just north of the border in the Huachuca Mountains.

They camped at Cienega on the east side of the Huachuca’s where they found signs of Apaches in the area. The troopers couldn’t help but notice the Apache signal fires that followed them. It was apparent they were watching Cushing’s small band of troopers.

Just as Cushing was determined to kill or capture Cochise, the Apaches had targeted Lt. Cushing and were setting an ambush for him in the Whetstone Mountains.

On May 4th they headed north along the east side of the Huachuca’s and camped that evening at Canyon Alisos south of the Babocomari River. Grass was scarce as the Apache had been setting fires in the area.

They left camp on the morning of May 5th at 7 A.M. riding northwest to old Camp Wallen on the Babocomari where Cushing planned to camp but the grass had all been burned off and was still burning. Cushing decided to camp at Bear Springs in the Whetstones and the Apache warriors, led by Juh were waiting for him. About two miles north of Wallen they struck a small trail leading into the Whetstones. Cushing sent Sgt. Mott and three men and to follow the trail while he led the rest of the troop up the main one.

Sgt. Mott’s written report tells what happened next: “I followed the track about three-fourths of a mile until it entered a canyon, which was simply a deep arroyo, seeing that the squaw in walking along the sand had taken great pains to make a clear print at each step, and that she even avoided all stones and rocks in order to do this more effectively, I became convinced that we were being led into a trap and immediately determined to leave the canon. Scarcely had I reached the top of the left wall, when I found my suspicions had been correct as a party of Indians about fifteen (15) in number were hid in a side canyon joining the one I had just left, and would have intercepted my retreat had I continued following the track. Being at the time well posted I thought I could with two men hold them in check while a third man went off to signal Lt. Cushing back; as we were dismounted to be ready for them I saw a second and much larger party running towards my rear; I then decided it was expedient to fall back but in the act of mounting, the Indians fired a volley disabling the horse of Private Green, and severely wounding Private Pierce. These men started on foot for the rear, closely followed by the enemy, who ran so close on Green as to snatch the hat from his head. The third man who had signaled Lt. Cushing, looking back saw how matters stood and fired into the Indians, who no doubt thought the main body had come up, as they paused, giving us a chance to escape. The front line of Apaches (they advanced in two lines) having fired off their rifles did not stop to reload but kept following us thinking to capture us alive. They could have killed us being all around us with breach-loaders and revolvers. Some of the Indians in the second line kept up a brisk but harmless fire.”

Lt. Cushing, packer Simpson, armed with a Henry repeating rifle that carried fifteen cartridges and Private Chapman joined Sgt. Mott along with Private Green, who managed to elude his pursuers and the rest of Troop F now had eleven men in the line. Still they were outnumbered fifteen to one. After a short fight the Apache retreated to the hills. The Apache lost five men killed and F Troop lost three horses.

Cushing sent three men back to the pack train and gave orders to move forward. Both Simpson and Mott suggested moving across open ground against an enemy with cover was too risky but Cushing, always the unrelenting beau sabreur, believed the Indians were routed.

He counted his men. “Eight,” he said, “that ought to be enough.”

And charge they did. They got about twenty yards when the Apache opened fire. A fatal bullet struck Simpson in the head. Cushing sent a man to retrieve him. When the Indians saw they were down to six men they charged. Cushing was the next to be hit in the chest. Mott and Pvt Fichter grabbed him by the arms and tried to pull him to safety, but another bullet struck him in the head. Simpson was also hit again. While mounting his horse Green was fatally wounded. Mott was forced to leave the bodies of Cushing, Simpson and Green behind and fight for their lives in a running gun battle. He did manage to retrieve Cushing’s revolvers and Simpson’s Henry rifle.

Mott and Troop F managed to arrive at Camp Crittenden that evening.

Three troops of cavalry arrived at the battle site in the Whetstones  two days later. By that time Juh, Geronimo and rest of the band were safely back in the Sierra Madre. They had set a perfect trap to get Lt. Cushing. He took the bait and paid the price.

Lt. John Bourke had the sad job of burying mutilated  remains in a canyon where they fell after the coyotes, crows and buzzards had feasted on their remains. They were later re-interred and re-buried at

Fort Lowell near Tucson. Later still, Lt. Cushing was buried at the Presidio in San Francisco.

Sgt. Mott received the Medal of Honor for his heroism.