The Man Who Killed Santa Claus Ol’ St. Nickolas leaped out of the plane into the wild blue yonder. At first he appeared to be in a free fall and suddenly the crowd's cheery mood changed to horror. 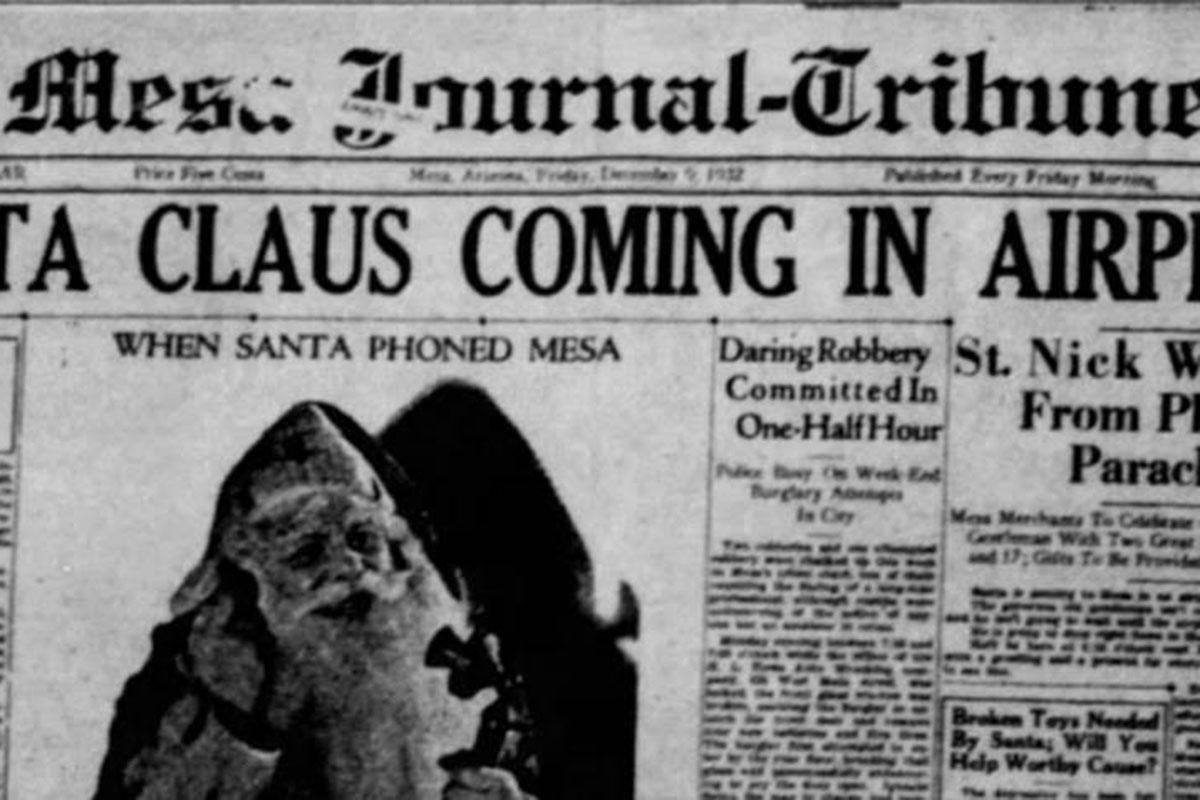 The Great Depression was in full bloom and hard times had fallen on the rural communities of Tempe, Chandler, Gilbert and Mesa, Arizona that Christmas of 1932. It was the height of the Christmas shopping season and local merchants were feeling the pinch. Not only was business slack but it looked as if the annual Christmas parade was going to be a bust.

John McPhee, colorful editor of the Mesa Tribune, looked at the dismal faces and determined to inject some spirit into Christmas. McPhee loved promotional schemes but he outdid himself on this one.

“Why not,” he asked the local businessmen, “hire a parachutist to dress up in a Santa suit and jump from an airplane? He could then lead the parade through town. People will come from everywhere to see it and while they’re here they’ll go Christmas shopping.”

Parachuting was considered a dangerous stunt. For that matter aviation was still a novelty. Charles Lindbergh had flown the Atlantic only five years before. And never had Santa dropped from the sky dangling beneath a billowing canopy.

“Splendid idea,” the merchants agreed. Their eyes sparkled with gleeful anticipation. They could almost hear the cash registers ringing like Christmas bells.

McPhee managed to find an itinerant stunt pilot who was willing to make the jump and a deal was struck. But, on the morning of the event the stunt man failed to appear. McPhee was finally able to locate his man at a local saloon, screwing up his courage on a barstool. By the time McPhee got there the man was so screwed up he couldn’t get off the barstool.

“What now?” the worried merchants wanted to know.

“Fear not,” said irrepressible editor, “I’ll borrow a department store dummy, dress him in the Santa suit and have the pilot toss him out of the airplane. I will then appear in another Santa suit and lead the parade through town. No one will know the difference.”

An ingenious idea, the merchants agreed.

The news had traveled fast and hundreds of spectators had gathered to witness the event. All eyes gazed anxiously skyward as the drone of the airplane’s engine could be heard off in the distance. Then they saw the plane circling overhead. To build anticipation in the crowd the pilot circled the field near Apache Boulevard and Alma School Road several times. Then the door opened and a large figure in a red suit appeared in the doorway. The crowd began to cheer. Then it happened, Ol’ St. Nickolas seemed to leap out of the plane into the wild blue yonder. At first he appeared to be in a free fall and suddenly the crowd’s cheery mood changed to horror. Santa began to tumble end-over-end, down, down, down like a sack full of potatoes. There was a loud “splat” as Santa did a perfect belly flop on the field.

Through it all, McPhee remained undaunted. He jumped out of his hiding place as if nothing had happened and proceeded climb on the Christmas decorated wagon to lead the parade through town.

But the public wasn’t buying…..literally and figuratively. Would-be shoppers loaded their kids in the family car and headed back to their farms. Merchants muttered unprintable unpleasantries as they stood in the doorways of their empty stores.

McPhee quickly realized he was about as welcome as a coyote in a hen house and decided to leave town for a few days hoping the event would be forgotten. It wasn’t. Upon his death some 36 years later, the front page of the Mesa Tribune noted his passing with this banner, “John McPhee, The Man Who Killed Santa Claus, Died Today.”