The Treacherous Murder Of Mangas Colorados Known as the single greatest leader of the Apache... 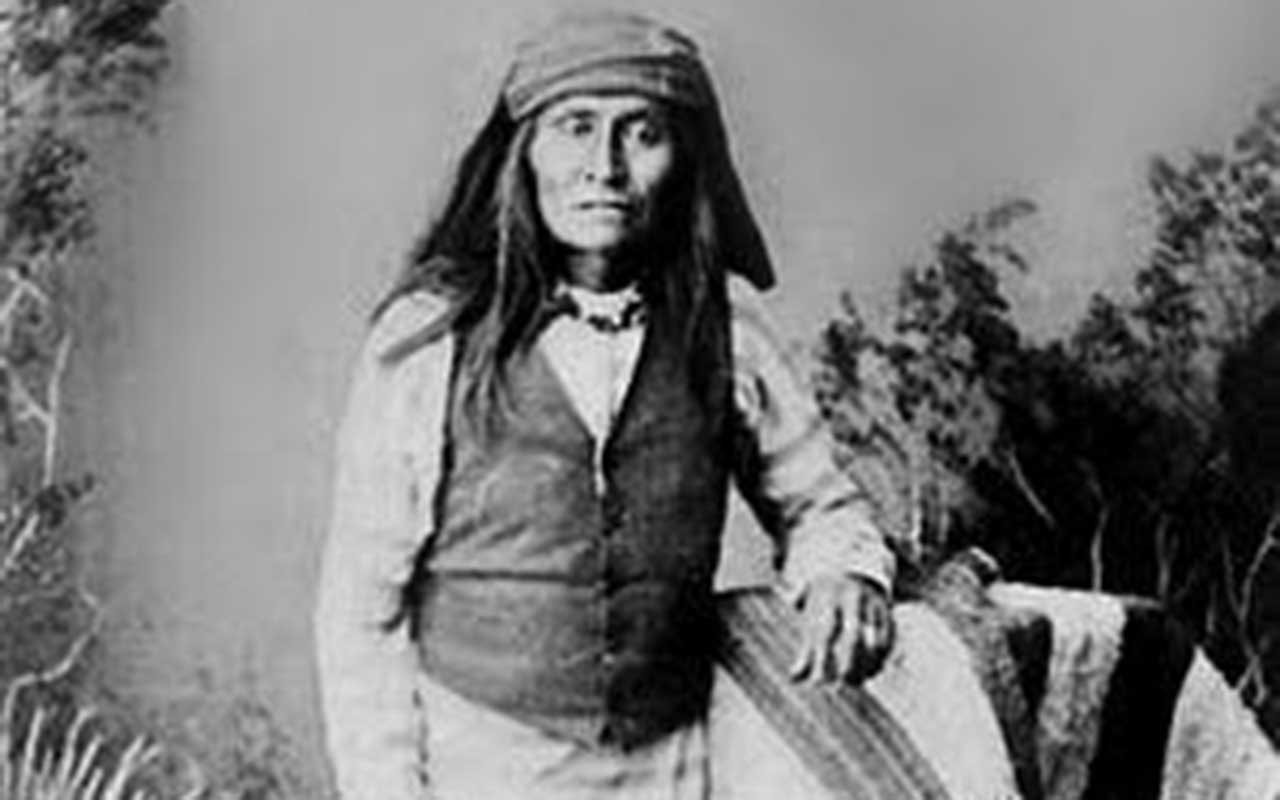 After coming under heavy gunfire from Membreno and Chiricahua Apaches under Mangas Colorados and Cochise at Apache Pass, on the evening of July 14th, 1862, Captain Tom Roberts dispatched six cavalrymen to return to the supply train and see to its protection. As the men rode out into the Sulphur Springs Valley to the west of the pass, they were jumped by a large band of well-armed Apache. In the opening fire one soldier was shot in the arm and two horses were wounded. Private John Teal fell behind and found himself cut off from his comrades. Realizing they could be of no help to Teal, the others rode on and managed to reach the safety of the supply train. Meanwhile, Teal had turned his horse southward, heading down the valley in hopes of outdistancing his pursuers. It was to no avail. The warriors closed in. A well-placed shot dropped his horse. Teal jumped free and secured a position behind the dying animal. His only chance was to keep them at a safe distance until darkness approached. The rapid firing of his Springfield breech-loading carbine confused the warriors, who up to now had never faced such a weapon. They circled around cautiously. The standoff lasted for about an hour when one unusually large brave rode up close. Teal took careful aim and fired, sending a bullet into the huge midsection of the warrior. Suddenly, the Apache lost interest in Teal and rushed to the aid of their fallen comrade. They picked him up and rode away quickly. Wasting no time, Teal took his saddle and bridle, slung them over his shoulder and began an 8-mile hike to the supply train. He arrived late that night, much to the surprise of his comrades who had given him up for dead, or worse.

It was later learned that the warrior Pvt. Teal had shot was none other than the great Apache Chief, Mangas Colorados.

The warriors, carrying their wounded chieftain into Chihuahua, rode into the Mexican village of Janos. They woke up the local doctor and told him, “Mangas hurt. You make him well and Janos lives. If Mangas dies, Janos dies.” No physician has ever operated under more trying conditions.

Luckily the good doctor was aided by the rawhide-tough constitution of his patient. The bullet was extracted, the wound bound and true to their word, the Apache left peacefully, and Janos lived.

Jack Swilling, erstwhile Confederate officer who considered himself an Indian fighter, left the Rebel army to remain in Arizona-New Mexico. He hired out for the Union as a civilian express rider and later as a guide and scout during Army campaigns against the Apache in the Pinos Altos country.

The fateful meeting in New Mexico in 1862 between Jack Swilling and the legendary explorer Joe Walker was probably a coincidence but the effects were far-reaching. He met Walker at Fort McLane and learned they were attempting to capture the wily old Mangas Colorados.

Mangas was a giant of a man and had a domineering personality. He was blessed with several daughters and to form alliances, he skillfully married them off to other Apache leaders, including Cochise. He’s been called the single greatest leader of the Apache. But the long years of warfare had taken a toll on the old man.

Mangas had been seriously wounded a few months earlier against Union troops at the Battle of Apache Pass and was ailing but even in poor health he was still a formidable warrior capable of terrorizing the miners and prospectors in the area.

Walker and his party were on their way to explore Arizona’s rugged central mountains but had little knowledge of the area and Swilling knew the country better than any other white man. When the two met at the ruins of Fort McLane, New Mexico a plan was hatched to capture the wily old chief and thus allow the Walker Party safe passage through the rugged mountains that straddle today’s Arizona-New Mexico border. Walker wasn’t interested in killing Mangas, he just wanted to take his party of prospectors safely through the old chief’s domain and search for gold in Arizona.

Guided by Swilling they headed west from Pinos Altos but found their path blocked by Mangas and his warriors.  For a time the two old, grey-headed warriors sparred like two grand chess masters mapping out their strategies on a chessboard.  During the stalemate, Swilling went out to parley with the chief and managed to get the drop on him and took the old chief prisoner. Walker planned to release him after they safely passed through but the Union officer in charge of the area, Lt. Colonel Joseph West, ordered him to turn the chief over to the soldiers. On the night of January 18th, 1863, West, said to his soldiers, “Men, that old murderer has got away from every soldier command and has left a trail of blood for 500 miles on the old stage line. I want him dead or alive tomorrow morning, do you understand? I want him dead.”

They proceeded to torment the old man with bayonets heated in the campfire. When he protested, they shot him. The official report said prisoner shot while trying to escape. The buried him in a shallow grave. Later the dug him up, cut off his head, boiled the flesh off the skull and sent it back east where it was put on display. Several years later charges were filed against West. He denied them and the matter was dropped. It was not one of the prouder moments in the history of the Indian Wars.