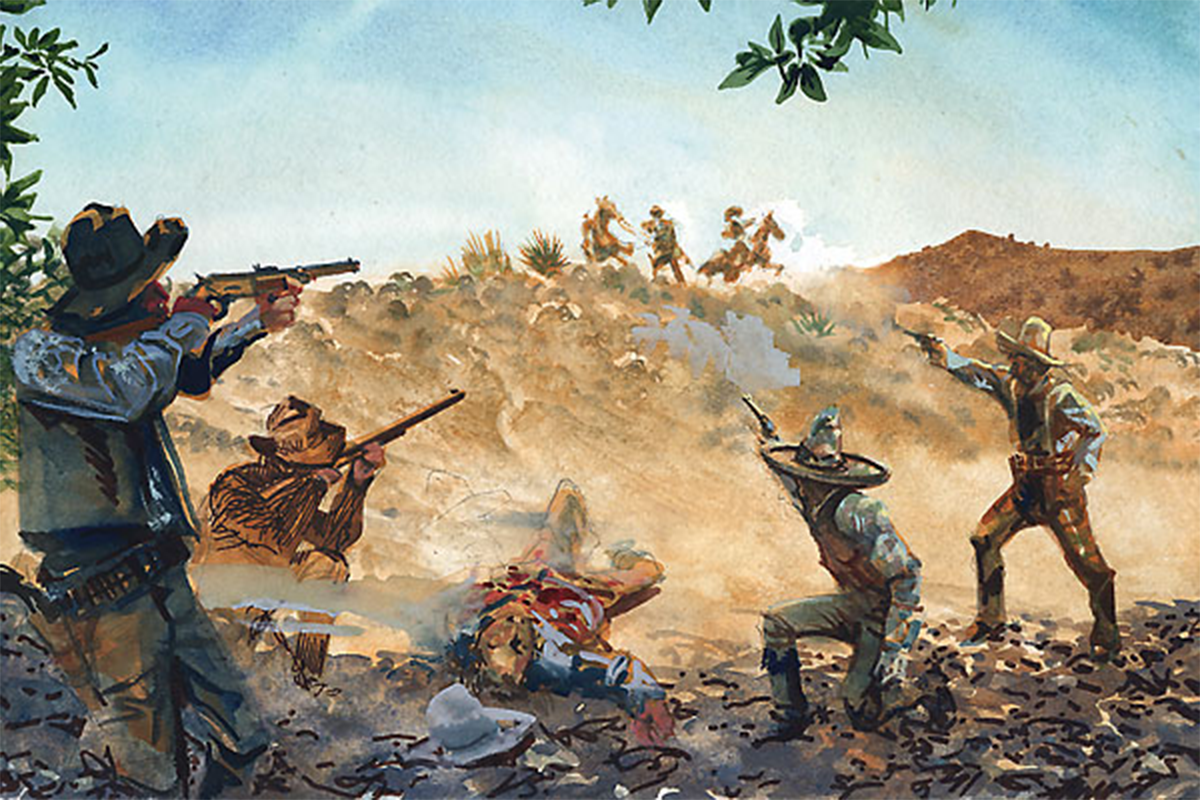 I replied, “That’s because there are two different stories.” During the months following the street fight in Tombstone, the Cowboys, after the Spicer Hearings cleared the Earp’s of murder, resorted to ambushing their enemies. On the evening of December 28th, 1881, Virgil Earp was shot from ambush while patrolling the streets of Tombstone. Then, a few weeks later, on March 18th, 1882, Morgan Earp was gunned down by an assassin.

The next day the coroner’s jury included Curly Bill among seven suspected assassins. But once again friends of the suspects provided alibis for them and they were all released, proving once more a Cow-boy couldn’t be convicted in Cochise County. Wyatt knew the only way justice would be served for the shooting of his brothers would be for him to take the law into his own hands. He would be his brother’s avenger, becoming judge, jury and executioner. Wyatt led a small posse of friends on a vendetta against the perpetrators.

On March 24th at Cottonwood Springs, in the southern end of the Whetstone Mountains, west of Tombstone, Wyatt and Curly Bill met again. Both parties met unexpectantly at the watering hole. There was a furious exchange of gunfire. Curly Bill and Wyatt were both armed with shotguns. Bill fired first and his burst hit Wyatt’s coat. Wyatt opened up with both barrels and nearly cut Bill in half.

With Curly Bill out of the fight, Wyatt turned his attention to the other Cowboys, who were ducking and dodging, firing wildly as they ran for cover. Wyatt dropped the empty shotgun and reached for his pistol, but during the excitement, he’d forgotten the loosened gun belt which had slid down around his knees.  To make matters worse, his horse, spooked by the gunfire, was doing a war dance keeping Wyatt from pulling his Winchester from the scabbard. Then he reached for his pistol only to find his gunbelt had slipped down almost to his knees. The outlaws made their getaway into the woods, firing as they ran while a pre-occupied Wyatt and his mount were doing a circle dance. One of the Cow-boy’s bullets ripped through the horn on his saddle and another shot off his boot heel.  Wyatt was able get off a few well-aimed shots into a grove of cottonwoods where the Cow-boys had sought shelter. One of them, Johnny Barnes, suffered a gunshot wound. It’s believed he died later of his wounds.

Afterwards Wyatt rejoined his friends, who had fled when the shooting started and the Cow-boys sought refuge in the cottonwood trees. It was said they took the bodies to the Patterson ranch on Babocomori Creek and buried them in a secret grave.

Bill’s friends denied their leader died at the hands of Wyatt Earp.  Some said he went to Mexico, married a senorita and lived happily ever after. Others claimed he went to Colorado and got a new start, still others said he went back to Texas.

Did Wyatt kill Curly Bill? Truth is, nobody was ever able to prove he didn’t. The Tombstone Epitaph, the newspaper supporting the Earp’s ran a story agreeing with Wyatt’s version and the Cow-boy organ, the Nugget, sided with the Cow-boys.  They claimed he’d been miles away and offered a $1,000 reward to anyone who could produce Curly Bill’s dead carcass. In response the Epitaph offered a $2,000 reward to anyone who could produce a live Curly Bill. Surely, Curly Bill himself couldn’t have resisted an offer like that. One thing is certain, no one ever saw or heard from him again.

What do I think? I think Wyatt killed him. There was no way the Cow-boys were going to admit Wyatt killed their leader.