A Cure for Baldness? 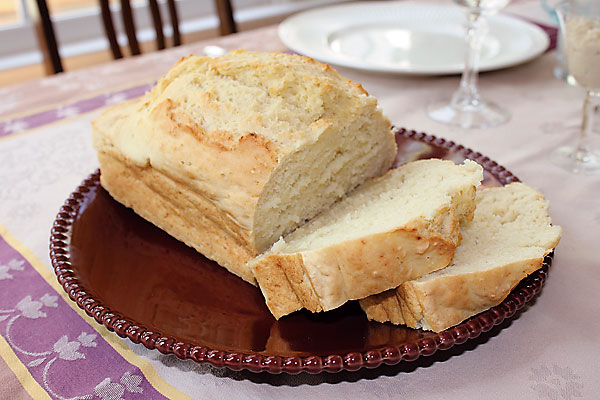 For centuries, bread has been a food staple.

“I got six loaves of bread for a quarter at a bakery, and a bucket of syrup at a grocery…I would dip the bread in the syrup and eat it, and that was what I lived on,” penned the starving attorney Oliver H. Cross, who began his law career in McGregor, Texas, in 1894.

The bread must have done its job. He went on to become district attorney, a representative in the state house and a U.S. congressman.

For centuries, bread has been a food staple. Made from various flours, potatoes and corn, bread was shaped into loaves, biscuits, muffins and more. It was also turned into soup, pudding, toast and many other practical, meal-extending edibles. No matter the meal, bread was usually served in one form or another. Sometimes it was the only food served.

Making bread could be a real challenge, especially for pioneers who lived in remote areas or for those riding the range. “Cooking in pioneer days was a real problem,” admitted Mrs. Ford, recalling her life in Canyon City, Oregon, in the later part of the 19th century. “There was hardly anything to cook…. One example was bread. We had to make our own yeast first, before we could start to make the bread. Always on Saturday, we would make enough bread to last through the following week.”

Mrs. W.A. Davison, who lived in Ogallala, Nebraska, in the 1890s, found her challenge hissing at her. “Not being able to buy bread in those days, Mrs. Davison decided to make some biscuits. But when she looked into the flour barrel there was a huge bull snake curled up in it. So they went without biscuits, and had to go back to town a distance of around 20 miles to buy some flour before they could make bread.”

Using leftover or stale bread was a common practice in frugality. Mrs. Anne Abernethy Starr, born in Portland, Oregon, in 1869, remembered making a “…sour milk biscuit or hot cake made of stale bread. Stale bread was soaked overnight in sour milk. The next morning soda was added for leavening, and perhaps an egg for binding the mass together. It was then fried in cakes or baked in iron gem pans.”

Different types of breads became trendy. What was popular in the early 1800s was considered peasant food by the end of the century. On March 3, 1886, North Dakota’s Bismarck Tribune ran a story about that very subject. The headline read, “Bread Must Be White: Fashion’s Arbitrary Rule Concerning the Staff of Life.” Wholesome brown bread had gone out of fashion, with refined white bread taking its place. Only those in higher social circles could afford adulterated bread, which was made white by adding alum, cornstarch or other additives.

The article noted that children living in the Indian Territory were very healthy due to the wheat in their diets. Former Indian Commissioner G.P. Smith also believed the wheat protected against baldness! “…he never saw a baldheaded Indian, and the physicians account for this by the fact that the Indians eat wheat.” They claimed hair contains sulfur, and if one did not eat food with sulfur, then the hair must naturally suffer.

By 1893 Western housewives no longer had to mix, knead, rise and bake the bread. The Royal Baking Powder Company offered the “new” bread. The recipe naturally included the company’s baking powder. The story was published in newspapers across the country. On April 26, the Kansas newspaper, The Sedan Lance, raved: “Less than an hour from the dry flour to the most perfect loaf of bread I ever saw.”

Sift flour, salt, sugar and baking powder together in a large bowl. Mash or sieve the potato, and add to the flour mixture. Add 2 cups potato water and blend into a stiff batter, but do not overbeat. The dough should not be as stiff as if you were making yeast bread.

Pour batter into a greased bread loaf pan—it should only come halfway up. Cover with foil for the first 15 minutes. Bake at 375° for about 45 minutes.