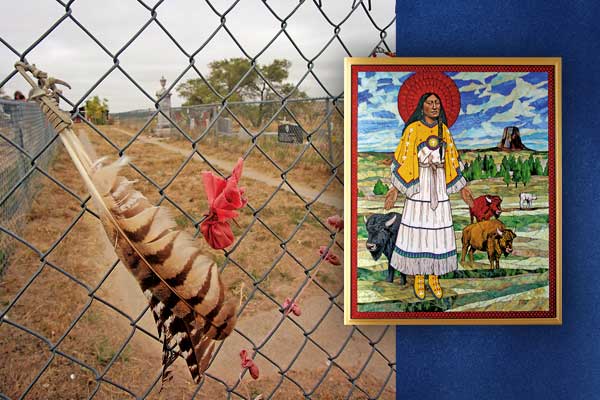 The first time I visited the Pine Ridge Reservation in the southwest corner of South Dakota, I stopped at the Wounded Knee Memorial—and I couldn’t get out of the car. After a minute or two, I drove away.

It’s that kind of place.

Twenty years later, I’m back, bound and determined to find a feel-good story on the two million-acre reservation, home to roughly 40,000 Oglala Lakota.

This time, I make myself get out of the car at the Wounded Knee Memorial. On December 29, 1890, in the last major American Indian-Army clash (using “clash” loosely), Lakota men, women and children were killed—140, 200, 300? No one really knows the exact number—from bullets, cannon fire or hypothermia.

The dead were buried in a mass grave, now surrounded by a chain-link fence. The cemetery does not charge admission to visit. Usually, that makes me, cheapskate that I am, feel good. Yet I feel disturbed in this place. I’m thinking: Is this going to be as feel-good as I get? Because, honestly, I don’t feel happy.

This is Pine Ridge today: Unemployment over 80 percent. One of United States’s poorest counties. An alcoholism rate that is estimated as high as 80 percent. A suicide rate that’s more than twice the national rate, and a teen suicide rate four times the national rate. The life expectancy at Pine Ridge is the lowest in the country—in fact, in the entire Western Hemisphere. Only Haiti has a lower life expectancy.

Wanna visit a Third World country without needing a passport? Here’s the spot.

I pull into the Pine Ridge Area Chamber of Commerce Visitor Center. Pine Ridge is part of the Alliance of Tribal Tourism Advocates, nine tribes focused on attracting tourists to not only this reservation, but also other South Dakota Indian sites. The new visitor center building includes a nice museum.

Then a visitor asks Executive Director Ivan Sorbel about his homeland. Sorbel smiles and politely tells the tourist, “This really isn’t our homeland. It’s where the government put us.”

Back in the car, I’m listening to KILI-FM, the “Voice of Lakota Nation,” out of Porcupine. The Food Stop Café has a great lunch special today, the announcer tells me, but the Food Stop is in Kyle and I’m heading to Pine Ridge, to the Red Cloud Indian School.

Yes, I’m actually thinking I’m going to accomplish my mission to find a feel-good story by visiting the grave site where Red Cloud was buried. The same Red Cloud who once said of the whites: “They made us many promises, more than I can remember. But they kept but one: They promised to take our land—and they took it.”

A few minutes later, I’m in the school’s Heritage Center, which celebrates not only Lakota heritage, but also art. This summer will mark the 45th annual Red Cloud Indian School Art Show.

It’s a great museum and a wonderful art gallery. The historical works are stunning, but the contemporary art is what makes me smile. Each year, the show features roughly 175 works, from paintings and sculptures and photography to bead work and quill work, created by more than 50 Indian artists. Some $7,000 in prizes are awarded to professional and young artists in 24 categories.

Suddenly, I look around at the students, and I see myself surrounded by smiles. As I walk to Red Cloud’s grave, I think, maybe, just maybe, he’s feeling pretty good after all about some things at Pine Ridge.

Hey, I feel pretty good myself.

Johnny D. Boggs might have felt even better had he made it to the Food Stop Café in Kyle, South Dakota.