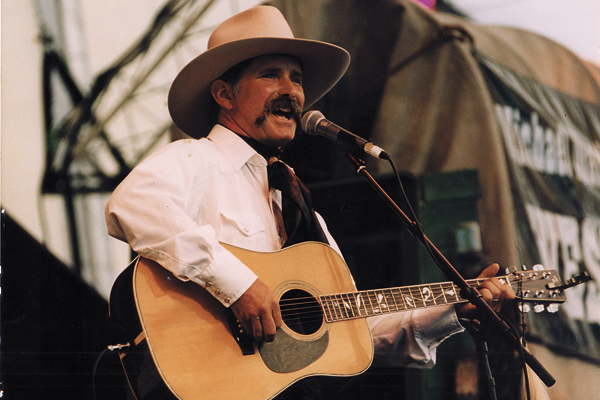 When you think Bluegrass, you are thinking Flatt & Scruggs and Bill Monroe.

When you hear Bluegrass, you are probably hearing the “high lonesome” sound of the Del McCoury Band. Del and his band epitomize Bluegrass.

The International Bluegrass Music Association (IBMA) has showered their annual awards on Del and his band since 1990: eight times Entertainer of the Year, four times Male Vocalist of the Year, twice Instrumental Group of the Year and Album of the Year in 1994 for A Deeper Shade of Blue.

A young Delano Floyd McCoury was introduced to the Bluegrass music of Lester Flatt and Earl Scruggs at an early age by his older brother. So impressed was he, that he took up the banjo and taught himself Scruggs’ three-finger pickin’ style. He played with family and friends in Baltimore area honky-tonks until he was invited to join Bill Monroe’s band and become a Blue Grass Boy in 1963.

After not much more than a year, Del quit Monroe so he and his new bride could move to California. The West Coast didn’t suit them and they moved back to York County, Pennsylvania, where Bluegrass gigs were more plentiful.

In 1967, Del formed his own band, Del McCoury and the Dixie Pals. Working various day jobs and traveling to gigs kept him busy for the next two decades. “Back then I didn’t take it as seriously as I do now,” Del says. “It was more of [a] fun thing. Musicians would come and go. I played the Bluegrass festivals on weekends, sometimes a thousand miles away, just to keep a band together. I did that all through the ’70s. I recorded some pretty good albums and had some good bands, especially for being just part-time.”

In 1981, Del’s son Ronnie began playing part-time with the band. Then only 13, Ronnie has since been named IBMA’s Instrumental Performer of the Year for mandolin nine times. Six years later, Del’s son Rob joined in, first on bass, then on banjo. The brothers have created their own projects, too, winning Instrumental Album of the year in 1996. Del credits his sons for revitalizing and inspiring him onward, as well as for becoming a major influence in the success and direction of the band.

Del and family moved to Nashville in 1992 and about that time changed the name of the band to the Del McCoury Band, dropping the Dixie Pals moniker. That same year, the band added Jason Carter on fiddle and Mike Bub on bass. These two latest members have won the IBMA Instrumentalist of the Year awards three times and four times, respectively. It is impressive, both to have a band with such talent and to have them stay together for about 12 years. No doubt, this accounts for much of the band’s musical quality and popularity.

Not to rest on his laurels, Del is a prolific songwriter and has embarked on collaborations with popular artists in other genres, such as Steve Earle and the band Phish. Del’s band continues to tour extensively, especially during the summer festival months. This year, the band made its first ever music video, which debuted at #8 on CMT’s Top Twenty Countdown and was also a finalist for Best Music Video at last May’s Nashville Film Festival.

The Del McCoury Band also joined the cast of the Grand Ole Opry six months ago as part of the Grand Ole Opry American Road Show, which recreates the Opry experience. The show began appearances this spring, performing at fairs and expos across the country, and will conclude at the Arizona State Fairgrounds on October 16. Along with the Del McCoury Band, other Opry members on the road show include Patty Loveless and Vince Gill.