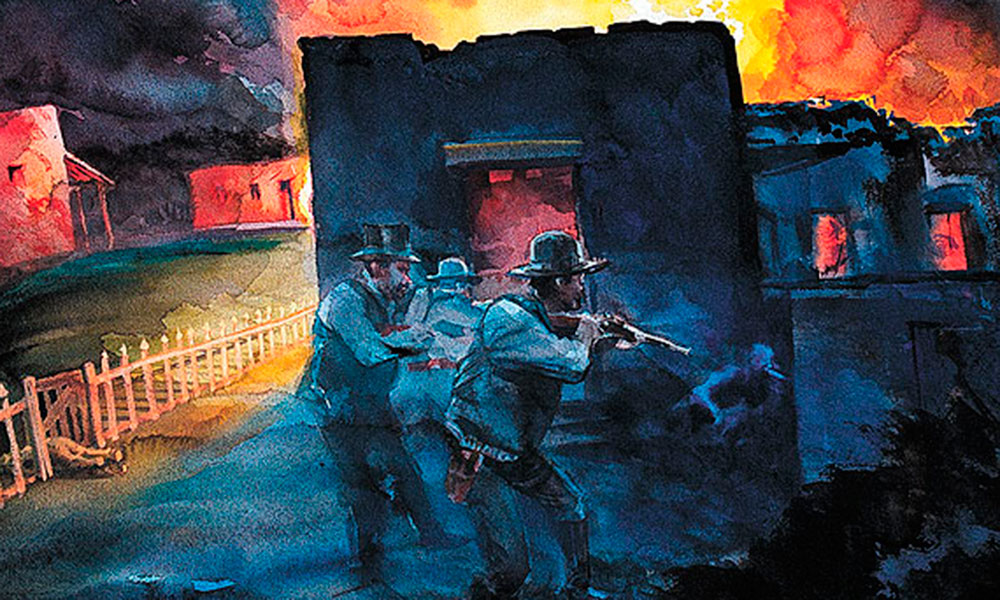 Fort Stanton, was named for a captain of dragoons named Henry W. Stanton, who, in 1855 killed by Mescalero Apaches. The post, located on the Rio Bonito in the Capitan Mountains was established that same year to protect settlers in the area. It was also in the heart of Mescalero Apache country.

The fort was abandoned in 1861 at the outbreak of the Civil War, something that emboldened the Mescalero, the same as it did other Apache groups in the region. During the Confederate invasion of New Mexico in early 1862, they occupied until their retreat following the Battle of Glorieta Pass. Before leaving they took the supplies then burned the buildings.

In September, 1862, the new Union Commander in New Mexico, General James Carleton ordered Colonel Kit Carson to re-open Fort Stanton. Carleton also issued an order to exterminate all the men and take the women and children to Ft. Stanton and await further orders.

When a group of 400 Mescalero surrendered to Carson at Ft. Stanton he violated Carleton’s orders by refusing to slaughter the men. Carson was much too popular for the general to court martial so he relocated the prisoners to the infamous new reservation at Bosque Redondo.

Carson had joined the army to fight the Confederates, not the Indians so he submitted his resignation, which Carleton promptly tore up and ordered him to take a force into the Four Corners and round up the Navajo. Carson captured 9,000 and they were also sent on their Long Walk to Bosque Redondo.

Fort Stanton was the site of a famous gunfight in 1862 between the popular Captain Paddy Graydon and John Whitlock, an Army doctor who falsely accused him of massacring a peaceful band of Mescalero at Gallinas Springs. In reality Graydon was carrying out General Carleton’s extermination orders. During the ensuing gunfight Graydon was mortally wounded but Whitlock had a non-fatal gunshot wound. Graydon’s loyal troops put enough lead in his body to sink a small boat.

In 1880, during what was called Victorio’s War, Tenth Cavalry troops from Texas and Ninth Cavalry troops from Fort Stanton, Sixth Cavalry troops, along with Apache and Navajo Scouts took to the field after Victorio slipped back into Tulerosa from Mexico to recruit Mescalero warriors. Their plan was to cut off his escape back to Mexico but the wily warrior managed to give them the slip. Victorio was defeated by the Apache scouts at Palomas Creek on May 23rd, 1880, but he escaped again.

On October 5th, 1880 Victorio, one of the greatest of the Apache leaders took his own life rather than surrender at Tres Castillos, Mexico when the last of his band was surrounded by Mexican soldiers.

Fort Stanton is best-known for their role during the Lincoln County War. From July 15th to July 19th, 1878, Fort Stanton was a key player during the most famous battle of the Lincoln County War. During the siege at the McSween House in Lincoln. Billy the Kid and several other Regulators, including Alexander and Susan McSween were surrounded by the Dolan-Murphy faction known as the House of Murphy.

Colonel Nathan Dudley commander at Ft. Stanton, in direction violation of law of posse comitatus and with the backing of the notorious Santa Fe Ring, arrived and trained his cannon and Gatling gun on the McSween house. Susan McSween prevailed upon Dudley to intervene but he refused. The colonel claimed to be neutral but said if any gunfire endangered his troops he would open fire. The only gunfire that might put his troops in harm’s way was coming from the McSween house so in effect he neutralized the defenders while declaring open season for Dolan’s shooters.

Then Dudley’s men allowed two of Dolan’s men to set fire to the house. In the end Billy and several others boldly made a break from the burning house. Billy escaped but four others were killed. Alexander McSween, leader of the Regulators, was among the dead.