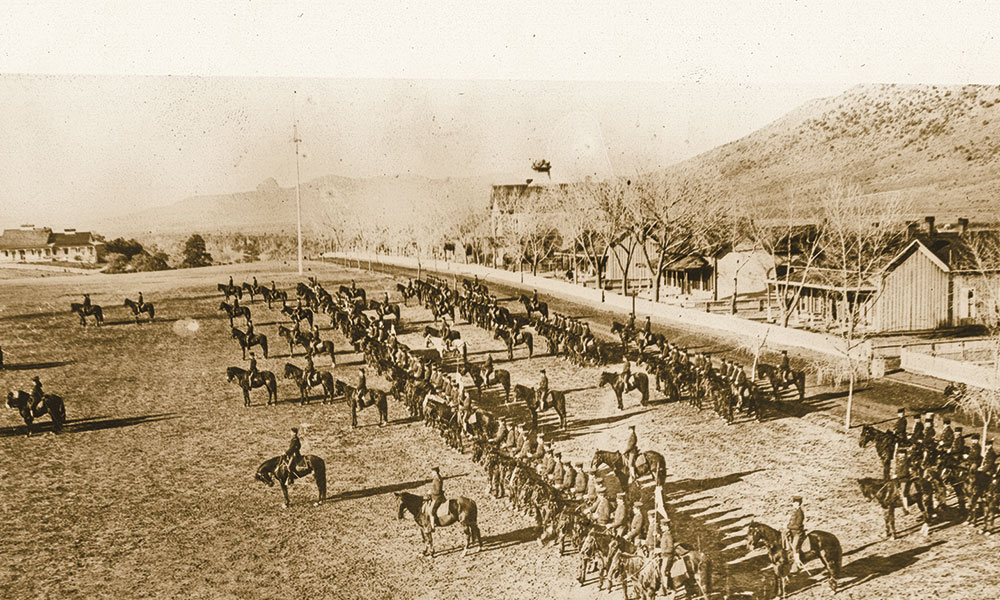 One could argue there is enough negative about the history of Fort Apache that people might not want to come,” Karl Hoerig admits. “It’s a complicated place. What’s most exciting is seeing the increasing number of the local Apache community coming to the site.”

Hoerig couldn’t be happier that one of the most iconic Western forts of the 1800s—and Arizona’s most complete U.S. Army complex from the Apache Wars—is finding a new life in a time of peace.

As director of site preservation and interpretation for the Fort Apache Heritage Foundation, Hoerig is one busy man.

Established in 1870—in the midst of the 1861 to 1886 Apache War with Cochise—Fort Apache was seen as both a strategic and a clever site. Major John Green, 1st Cavalry, located the post in the White Mountains, where, he enthused, “The climate is delicious…this one corner of Arizona were almost its garden spot….”

Besides, he noted, “It would compel the White Mountain Indians to live on their reservation or be driven from their beautiful country which they almost worship.”

He was right—except for “almost.” The site has always remained a revered place to the White Mountain Apaches.

The Army stayed at Fort Apache until 1922. The next year, the Bureau of Indian Affairs created the Theodore Roosevelt Indian Boarding School there.

In 1969, the tribe founded the Apache Cultural Center at the fort. Growing dissatisfied with the bureau’s lack of care, the tribe sued, in 1999, over mismanagement. The U.S. Supreme Court ruled in the tribe’s favor in 2003. In 2007, the Fort Apache Heritage Foundation was named manager to take over 24 of the 27 buildings. (The school still operates under the bureau.)

Since then, the foundation and supporters—from Arizona State Parks to Arizona Office of Tourism and Preserve America to Boeing—have launched an effort to not only preserve fort history, but also give the fort a future as a site for education, heritage perpetuation and economic development, including tourism.

Fort Apache has already become a community center for the tribe. Hoerig especially appreciates the fort’s Nohwike’ Bágowa (House of Our Footprints) museum, which, he says, is seeing the return of “objects made by ancestors of this community that were taken away 100 years ago.”

The lawsuit settlement gave the tribe $12 million—half for preservation of the historical buildings, half for an endowment for continued maintenance.

The preservation money is “nowhere near enough,” Hoerig admits, but every building has been treated and efforts will continue over the next 12 to 15 years.

Fort Apache deserves its status as a National Historic Landmark, Hoerig says, since it stands as a testament to the troubling nearly 160-year history of U.S. federal Indian policy, “from subdue and control to tribal self-determination.”