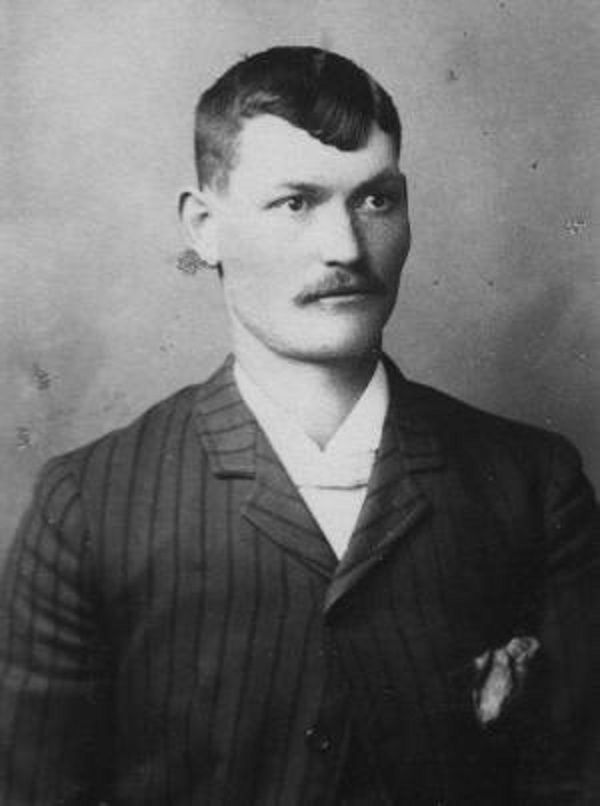 April 9, 1892 Johnson County, Wyoming: The column of hard-looking men rode up to within a short distance of the small ranch headquarters just south of the Middle Fork of the Powder River just before dawn.  The icy snow blowing in from the north was blinding.  They dismounted and held a short parley.  In a few minutes the cabin was surrounded.  They waited for daylight, rifles ready.

An old man stepped out of the cabin but no shots were fired.  He wasn’t on the hit list.  He carried a bucket and was headed to the river and when he was out of sight of the house they grabbed him.  A few minutes a younger man stepped out, apparently looking for his friend.  As he made his way towards the stable they took him prisoner and placed him with the old man

After a while one of the wanted men, big Nick Ray stepped outside.  A shot rang out and Ray went down.  He staggered to his feet but fell again.  Others began firing.

Suddenly, Nate Champion was in the doorway jacking the lever of his Winchester and firing several rounds into the stable. He reloaded and commenced firing again as Ray crawled slowly towards the door, Tossing his empty rifle aside, he reached down and pulled Ray inside the cabin.

“That’s a he man with plenty of guts,” one of the men said in admiration.

This wasn’t the first time Nate Champion had been in a tight situation with the big cattlemen.  In the fall of 1891 four of five stock detectives sneaked into his cabin down in the Hole in the Wall and got the drop on him and a friend.  The detectives fired, and missed but Champion returned fire and wounded one of his assailants and drove them off.

The WSGA created a hit list and then imported twenty-two Texans to exterminate “rustlers.” Recruited in and around Paris, Texas, they rode by train to Denver where, on April 5th they were met by a few Wyoming ranchers, who them issued new, high caliber .45-90 and .38-55 Winchesters.  With the curtains drawn and the doors locked, they headed north to Cheyenne where they were connected to a special train equipped with a passenger car, baggage car, three stock cars and a flat car.  That evening they pulled out for Casper where they unloaded and prepared for the invasion of Johnson County.

Winter comes early and stays late in Wyoming and the party of invaders rode towards Johnson County in a raging snow blowing in from the north as the Texans, ill-clad for cold weather, got a rude introduction to the brutal Wyoming winter.

The plan called for the “invaders” to take Buffalo but when they heard fifteen “rustlers” were holed up at the KC Ranch on the Powder River.  Plans were changed, something that turned out to be a fatal mistake, and in the early morning light, the forty-man army attacked the cabin.  Nate Champion and Nick Ray were the only ones on the hit list inside the cabin.  Two trappers, Bill Jones and William Walker were passing through and had been invited by Champion to stay the night.  They were both taken prisoner before the fight began and were later released with a warning to keep their mouths shut and get out of the country.

Nick Ray stepped outside the cabin and was mortally wounded.  Champion, facing withering gunfire, pulled his friend inside but Ray died soon after.

The invaders poured steady gunfire on the cabin all day while Champion gamely fought back.

Nate Champion was the working-class hero in the Johnson County War of 1892 that pitted Wyoming’s big ranchers, the Wyoming Stock Growers Association, against the small ones of whom Champion was a member. He’d been a top hand on several ranches, was a good cowboy, good with a gun and respected by his peers.

He helped organize the Northwest Wyoming Farm and Stock Growers Association for small ranchers and helped create a competing spring roundup after the large ranchers wouldn’t allow the small ranchers to join their annual roundup. Champion incurred their wrath when he grazed his cows on the public range claiming he had as much right as the big ranchers did.

The barons didn’t appreciate his defiance and their newspapers in Cheyenne branded him “King of the Cattle Thieves” and leader of the “Red Sash Gang”. This marked him for death even though WSGA attorney Willis Van Dementer told them there was no evidence Champion was a rustler.  And there was no Red Sash Gang.

On the morning of April 9th, 1892 a fifty-man band known as the Invaders with twenty two hired guns shipped in from Texas attacked Champion’s ranch. They shot and killed Nick Ray as he stood in the doorway. Alone, Champion held the Invaders off for several hours until they set fire to his cabin. With a knife in one hand and a pistol in the other he charged out the back door and was shot dead.

The large ranchers killed their nemesis but created a martyr. Nate Champion will live forever in the hearts of the small ranchers of Wyoming.