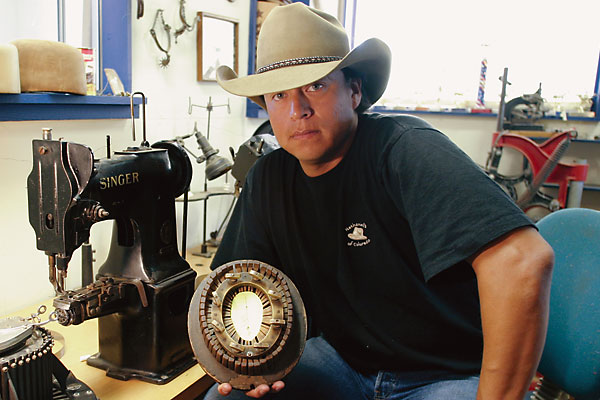 When people come into my store, many are surprised to meet me. One customer said to me, “I’m thinkin I’m going to see a 60-year-old Jewish guy making hats, and instead I find a younger guy, and on top of that, Native American.”

I got in the hatmaking business through a friend who made hats and offered to teach me. Much to my surprise, I worked with him for eight years, then I bought his equipment and started my own shop.

I live on the moon basically, so I feel if I can make it here, I can make it anywhere. Mancos, Colorado, between Mesa Verde National Park and San Juan Mountains, is an old ranching town where the cows outnumber the people.

Hatter Kevin O’Farrell once told me that you are only as good as your last hat. I took that advice to heart.

I’m not going to turn you into Tom Selleck, Quigley Down Under. I’m going to make a hat that looks like you, in a color that fits your complexion and style.

The greatest advice my mom and dad ever gave me: You can’t sit around with your hands out, expecting someone else to fill them.

Funmaker is a pretty rowdy name. It’s well known among the Winnebago in Nebraska and Wisconsin. I can’t even get a room in Winnebago, Nebraska, when I pull out my card and they see my name is Funmaker.

My Ho-Chunk heritage is something that I am very proud of. Having a successful business that I am passionate about is one of the ways that I feel I honor my tribe.

Thunderheart was a good heartfelt movie. I was emotionally moved by it. I felt I was there on the reservation. At the time, I was living in Albuquerque, and people from Isleta Pueblo, south of Albuquerque, wanted to see the movie. I took a van load of them to see it. They walked out, all of them, sobbing and saying “Thank you for taking me to see it.”

I’m more of a drugstore cowboy kind of guy. Do I ride horses? No, but I have always loved hats. I appreciate the old ways, but I’m not a cowboy.

The definition of a real cowboy is making a living on it, working a ranch. Downside is, this guy may be making $600 a month. If he’s going to throw down $400-$600 for a hat from me, it better be good and it better last for a long time.

A movie hat I admire is Brian Keith’s hat in The Indian In the Cupboard. (1. I made it. 2. It is a Montana Peak, period-style hat with great lines, and I like to make that kind of hat.)

A hat I will always keep in my collection is the “Classic Gus” style, because, in the right proportions, it can look good on almost anyone. Its dramatic crease photographs well.

What history has taught me is to appreciate people for their hearts, and not for who you see on the outside.

Nate is the owner of Nathaniel’s Hat Shop, open in Mancos, Colorado, since 2000. He is credited as being the only American Indian hatter in the world, and he specializes in making custom beaver fur hats with an 1895 conformitor. Nate was born in Wisconsin into the Ho-Chunk (formerly Winnebago) tribe, the tenth of 11 children born to Adam and Doris Funmaker, both artists. He lives in Mancos with his wife Kerrie and their three children.