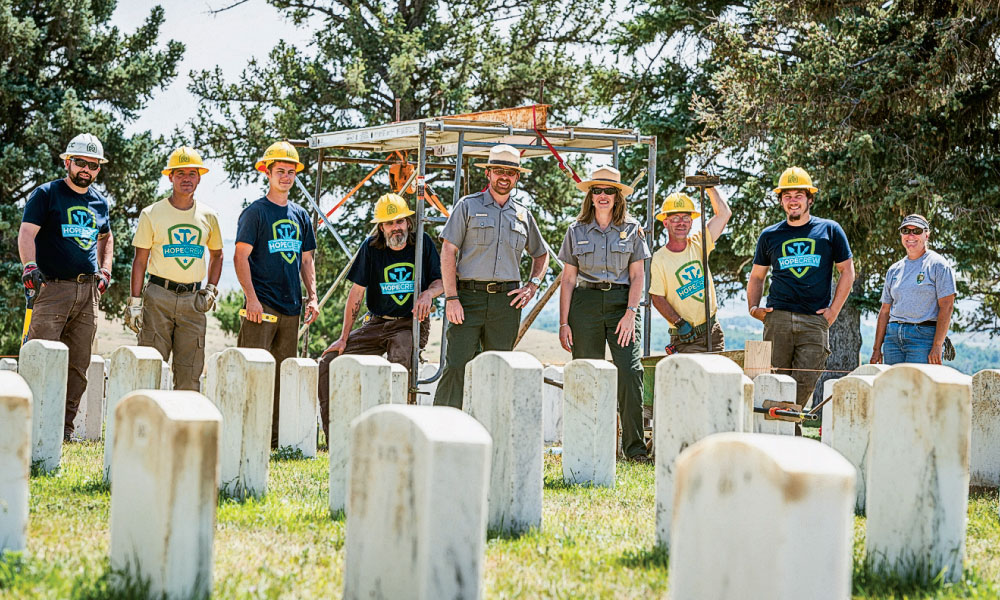 “America’s most hallowed grounds” is how National Park Service Manager Chris Ziegler views the national cemeteries that hold the soldiers who fought for this nation from its earliest days.

That’s why he became the champion for the Custer National Cemetery at the Little Bighorn Battlefield in Montana. That’s why he’s cleaning up the historic grave markers on the battlefield.

When he arrived in October 2012 as chief of resource management at the battlefield, Ziegler saw cemeteries showing the wear and weather of more than a century: headstones sinking, settling, stained, disarrayed. He remembers thinking of the soldiers, “They deserve better than this—they need a strong advocate.”

He didn’t hesitate to take on the role. “I have a national cemetery that needs help,” he informed other regional parks. “If you’ve got any extra money laying around, I could sure use it.”

Nobody had extra money—parks never do—but someone told Ziegler about a new project from the National Trust for Historic Preservation. Named HOPE,
its mission is to fund projects that will give youth experience in preservation trade work and help foster a new generation of stewards.

Ziegler’s $125,000 grant was one of the first projects approved. The four-week summer 2014 project involved 18 to 20-something year olds gathered through the Montana Conservation Corps for the first two weeks and American veterans for the second two weeks.

They cleaned up 270 of the national cemetery’s 4,320 headstones. Many mark the graves of frontier soldiers who were reburied here when their Western forts closed. Others are graves of veterans from more modern eras. Ziegler believes the headstones can all be refurbished in four years, and he says the park’s own funds from visitors can cover the rest of that cost.

This September, he received another HOPE grant for $47,000 to work on his second concern, the historic markers spread across the battlefield.

After the Battle of the Little Big Horn on June 25-26, 1876, the U.S. Army hurriedly buried its men and fled, afraid of another Indian attack, Ziegler says. But the graves were so shallow that wind, erosion and animals unearthed bodies. From 1876 to 1881, the Army kept reburying the men.

In 1881, troops dug up the enlisted men and put them in a mass grave, found today under the 7th Cavalry Monument on Last Stand Hill; officers had been earlier reburied in private cemeteries across the nation (Custer’s body is at West Point). The troops had the forethought to mark the original graves with cedar posts. In 1890, the Army installed white marble headstones on the battlefield to replace the cedar posts.

National cemeteries are found in 14 of our national parks. Ziegler calls these hallowed grounds “superlative remembrances to those who have given their lives for this country. These are the folks who took care of us. Now it’s our turn to take care of them.”