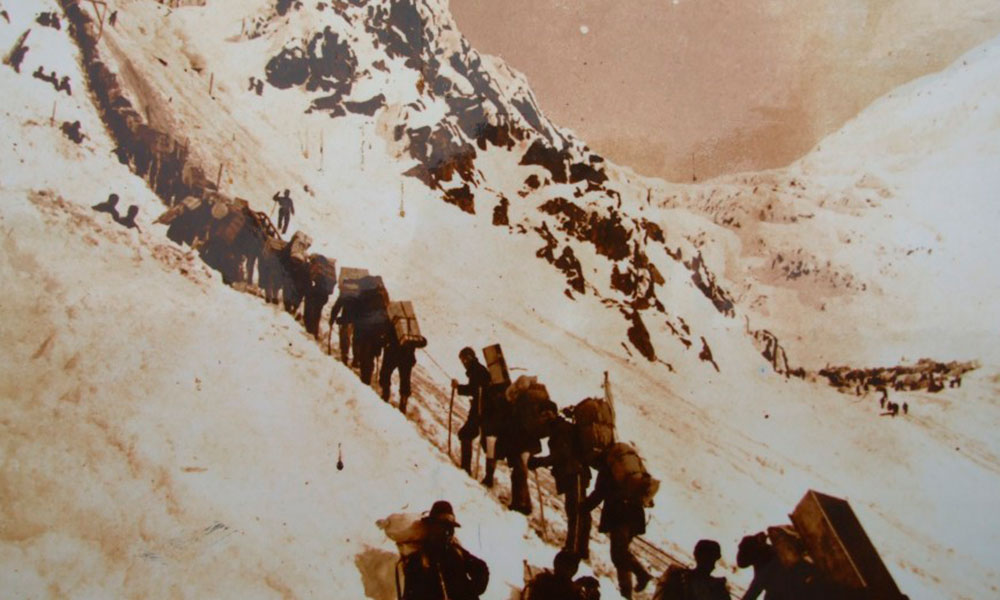 Nellie Cashman had the “Luck of the Irish,” to go along with a keen knowledge of geology and business.  She’d arrive when a boom town was in its early stages, build up a successful business, then sell out and move on before the boom town went bust.  During her time in Arizona she operated businesses in Tombstone, Tucson, Nogales, Harqua Hala, Globe, Bisbee and Yuma.

At Harqua Hala, a gold camp 80 miles west of Phoenix in February, 1889 according to the Phoenix Daily Herald she almost married Mike Sullivan but on the way to the preacher she changed her mind.

1885 to 1895 there are gaps in her story and she might have gone prospecting in South Africa.

In 1898 she joined the gold rush to the Klondike. She arrived in Skagway on March 20th, 1898. The Royal Canadian Mounted Police, not wanting careless Americans to die on Canadian soil, wouldn’t allow Americans to enter Canada without 2,000 pounds of supplies and equipment so Nellie, now fifty-four years old, packed up and down the steep, snow-covered inclines of Chilkoot Pass several times until she met the Mounties requirements.

While waiting for the spring thaw, she built herself a flatboat and then floated some 500 miles down the Yukon River to Dawson, arriving in mid-April where she operated restaurants and prospected for gold.

Upon learning of a big gold strike in Fairbanks she sold her claim for $100,000 and headed for Alaska.

Alaska turned out to be her last stampede. She spent her last years with her dog sled team combing the vast lands of the frozen north searching for one more gold strike.

In 1923, at the age of seventy-eight, she mushed a dog sled team 350 miles in just seventeen days. Newspapers all over Alaska carried the story of the intrepid Nellie Cashman.

Nellie died on January 4th, 1925 in Victoria, British Columbia at the St. Ann’s Catholic Hospital that she had helped established more than fifty years earlier.

There were many fictional dime novel heroines including “Mountain Kate,” “Bess the Trapper” and “Hurricane Nell.” These daughty lasses, clad in skin-tight buckskin, rode and shot their way through hair-raising adventurers were all created in the fertile imagination of dime novelists but Miss Nellie Cashman, now she was the Real McCoy.