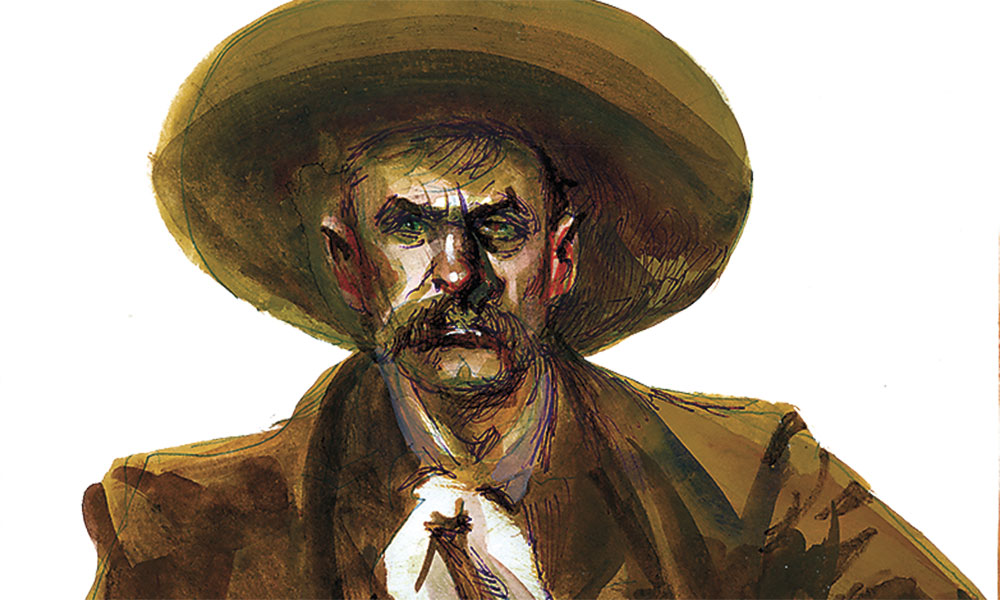 Pete Gabriel, accompanied by his friend Mike Rice, leaves in a buggy from his Riverside gold mines, headed for Florence, Arizona Territory.

“As was usual with Gabriel on such trips he had a quart of devil water along and imbibed freely of its contents. When we arrived in Florence, Gabriel was practically all in,” Rice comments.

After arriving in town, Pete is warned that Joe Phy, his former deputy, is looking to pick a fight.

Pete pays no heed to the threat. The former Pinal County sheriff retires to the Tunnel Saloon for drinks with owner John Keating.

When Sidney Bartleson sees Pete enter the saloon, he rushes to tell his friend Phy that the ex-sheriff is in town. Phy buckles on his gun rig, grabs a bowie knife and heads for the Tunnel Saloon.

Pete spots Phy peering in the window. He reaches for his gun, but Phy disappears. As patrons enter the saloon, Pete drops his hand to his six-shooter, which is tucked into his waistband.

At 8 p.m., Phy returns, coming through the doors with his pistol drawn (one witness claims Phy didn’t have his gun out).

Pete yells out “Joe!”—perhaps both as a taunt and a greeting—and both men open fire.

One shot snuffs a lamp. The former lawman partners exchange 11 shots as Pete works his way down the bar to the door.

Phy lunges forward, a six-shooter in his right hand and bowie knife in his left, and fires point-blank into Pete’s chest. The bullet tears into Pete’s right lung.

Another slug from Phy’s gun pierces Pete’s intestines. Incredibly, Pete stays on his feet as he backs out the door, returning fire.

One of Pete’s bullets hits Phy in the left thigh, shattering the bone; another slams into his belly. As Phy buckles over in pain on the sidewalk, Pete
fires point blank, hitting Phy in the right shoulder and slashing through both lungs.

When a bystander tries to help Phy, he swings his Bowie knife, slashing the gambler’s leg and gasping out, “You murdering son of a bitch!”

Prelude to the Tunnel Fight

John Peter Gabriel is born on November 17, 1838, in Kruft, Germany, the fourth of six children. When Pete is nine, his parents emigrate to the United States. After Pete’s 62-year-old father dies, Anna can not support her family, so the 12-year-old boy is taken in by a prominent lawyer who soon joins the California Gold Rush.

There, 16 miles north of Marysville in the Yuba River region, Pete grows up among the rough gold miners and gamblers. In his early 20s, he becomes, by turns, a gold miner, a muleskinner and a guide.

The only knock against Pete is that he suffers from severe mood swings, which are exacerbated by his drinking, which he tends to do a lot (his two ex-wives confirm).

Pete soon gravitates to being a lawman in Arizona Territory. Several times he will be  elected sheriff (during one election, the vote ties, and the two candidates roll dice to determine who will serve; Pete loses, taking it all with grace and humor).

In November 1884, Pete is elected by a 130-vote majority to his third and last two-year term as Pinal County sheriff. He appoints 39-year-old Josephus Phy as his deputy.

A miner and freighter, Phy is born in Platte County, Missouri, on May 22, 1844. At age 15, he runs away from home, eventually landing in Arizona Territory, where he is taken in by attorney Granville Oury and his wife.

Phy unsuccessful runs for Phoenix sheriff, in 1872. He later serves as a Maricopa County deputy sheriff. In 1878, he is appointed a deputy U.S. marshal.

Phy neither drinks or smokes, but he has one trait he shares with Pete: he too has a bad temper.

In 1886, Pete plans to retire from lawing, so he throws his support behind his deputy. But then, in Casa Grande, Phy pistol-whips a teamster who claimed Pete had disparaged his opponent in the sheriff race; Phy also swings at a woman who tries to intercede. Pete is forced to arrest his deputy and then fire him. That starts the bad blood between the two former friends.

By the spring of 1888, Pete is working his Monitor Mine at the head of Mineral Creek in the Dripping Springs Mountains, northeast of Florence.

When Pete arrives in Florence on May 31, he hears that Phy is gunning for him.

Against all odds, Pete survives his serious wounds from the gunfight against Phy. Within a month, he is up and running. But the fight haunts him.

“…the killing of Phy preyed on [Pete] as long as he lived,” Mike Rice recalls. “He expressed his regrets to me on many occasions. It worried him in his waking and sleeping hours to the extent that he was often irrational on the subject. Once on the desert, while we were occupying the same blankets, he dreamt of his encounter with Phy and in a somnambulistic condition fired off every shot in his gun, at the same time exclaiming, ‘Joe, Joe, Joe!’”’

Pete is still shooting at ghosts in the Tunnel Saloon.

After the shoot-out, bystanders carried Joe Phy to the stage company corral. A doctor removed one of the bullets, but couldn’t do much more. Phy died from internal bleeding at 12:30 a.m.

Friends carried Pete Gabriel to an adobe house next to the Pinal County sheriff’s office. Hearing the news that the doctor would first treat Phy, Pete allegedly screamed, “What! My family physician treating my enemy before coming here? Tell him I won’t have his services. I don’t want him here.”

Another doctor, Thomas Sabin, was summoned from his residence 18 miles away. After traveling four-and-a-half hours, the doctor reached Pete’s bedside and told the ex-sheriff the bad news: “You are shot through the intestines and right lung, and your condition is hopeless.”

Pete supposedly replied, “Well, I had one lung shot away in Los Angeles years ago, but, by God, I will beat you to it and be without lungs, and still be a better man than any of my enemies.”

A tough old bird and true to his word, Pete was back on his feet within a month. Six months later, he was in the saddle as a deputy sheriff, hunting Southwestern stage robber Ham White.

A year later, Pete took part in the manhunt for the Apache Kid, who, with three companions, had killed a sheriff and a guard on the way to being locked up at the prison in Yuma.

Pete retired from the law, once again, to pursue mining.

On July 30, 1898, the former lawman died after drinking poisonous water, probably cyanide, at his mine in the Dripping Springs Mountains.

Recommended: “Pete Gabriel: Gun-fighting Lawman of the Southwestern Frontier” by John Boessenecker, The Journal of Arizona History, Spring 2012. Look for his latest book, Shotguns and Stagecoaches.