Cavalry Horses Did the U.S. Cavalry have remudas like the Old West cattle drives? 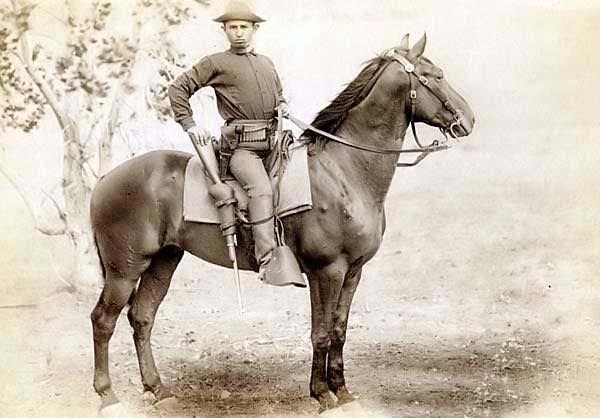 I had a question the other day asking if the U.S. Cavalry had remudas like the Old West cattle drives. I’ve never come across anything referring to remudas in my Frontier Army references. I asked True West contributor, Lee Noyes and the Past Editor of the quarterly newsletter of The Custer Battlefield Historical and Museum Association (CBHMA), who writes: “To my knowledge there are no references to cavalry remudas but we should not dismiss possible examples of such a reserve.”

“What we know is that there was a significant shortage of cavalry horses in the Military Division of the Missouri in 1876 as the U.S. Army organized columns against the “hostile” Lakota Sioux. They certainly were in short supply at Forts Abraham Lincoln and Rice as the 7th Cavalry prepared for the Little Big Horn campaign–so much so that the 26 mounts assigned to the Gatling gun battery were condemned cavalry horses (technically unsuited for any purpose). Of the 718 troopers that started on the expedition, as few as 566 (by one count) marched with Custer to Little Big Horn on June 22 mostly because of this shortage. Most of the regiment’s enlisted men left at the Powder River supply depot were dismounted. Thus, there would not have been enough spare mounts for a reserve in this case except private horses that belonged to officers tended to by orderlies. When General George Crook marched from his supply camp on Goose Creek, Wyoming Territory, to Rosebud battlefield, he mounted his infantry battalion on mules from his expedition’s wagon train, so there were not enough additional horses for this purpose.”

“The May 1876, 7th Cavalry Return reported that the regiment’s serviceable horses numbered 670 at the end of the month. Total enlisted personnel (present and absent) for the unit was 790, of which 718 marched with Brigadier General Alfred H. Terry’s ‘Dakota Column’ on May 17 (there was a dismounted group). The June 1876 Return (post Little Big Horn) reported 336 serviceable, 28 unserviceable and 319 horses lost in action or died. Thus, insufficient horses were available to mount all enlisted men present for duty when the expedition left Fort Abraham Lincoln, let alone furnish a reserve.”

As far as individual travel went, a rider who was limited to 1 horse & wasn’t in a particular hurry might make as much as 25 or even 30 miles in a day, but he’d be limited to 3 days of travel & then he’d have to rest the horse a day. Cavalry had an old song that went ’40 miles a day on beans & hay in the Regular Army, O!’ They made pretty close to that. Starting at dawn, they’d ride for 3 hours, then dismount, loosen cinches, & walk, leading horses, for 1 hr. Then it was back in the saddle for 3 hours walk, leading horse, for 1 hr. They didn’t ride at a trot or a gallop, either. They walked the horses. A horse can walk faster than a man–about 5-6 mph as opposed to about 2.5 to 3 mph.

The Army had strict rules for the care of horses. As the attached selection from Cavalry Tactics (1874) attests, “concern for the care and condition of horses on campaign to avoid fatigue suggests that reserves were not an option,” Noyes adds. “This manual further warned against excessive use of the gallop gait because it “very soon breaks down the horses. We must also emphasize that Custer’s march up Rosebud on Creek June 22-24, 1876 complied with the following mileage standards.”

“1193. Commanding officers must bear in mind that the efficiency of cavalry depends almost entirely upon the condition of the horses, which alone makes them able to get over long distances in short spaces of time. The horses must, therefore, be nursed with great care, in order that they may endure the utmost fatigue when emergencies demand it.

“The average march for cavalry is from fifteen to twenty miles per day. The walk is the habitual gait, but, when the ground is good, the trot may be used occasionally for short distances.

“Long marches or expeditions should be begun moderately, particularly with horses new to the service. Ten or fifteen miles a day is enough for the first marches, which may be increased to twenty-five miles when necessary, after the horses are inured to their work.

“In campaign, the usual precautions against surprise are taken, and an advanced guard and flankers are thrown out.

“A halt of from five to ten minutes is made at the end of every hour, for the purpose of adjusting equipment, tightening girths, etc. . . . if there be grass, each captain first obliques his company a short distance from the road to let the horses feed, as horses must always be encouraged to graze as much as possible on the march. . . .

“On long marches, officers and men, except the sick, are required to dismount and lead from twenty to forty minutes every second or third hour; to save their backs, horses will be led over steep ground, and particularly down-hill.

“No enlisted man will be permitted to leave the ranks for any purpose, except on foot, leaving his horse.

“If the animals are to be subsisted by grazing, the camp should be formed early.

“It is sometimes necessary to encamp without water, to have grass for the horses; on such occasions, all animals must be watered within an hour of the last halt, and enough water carried forward to last the men for the night.”