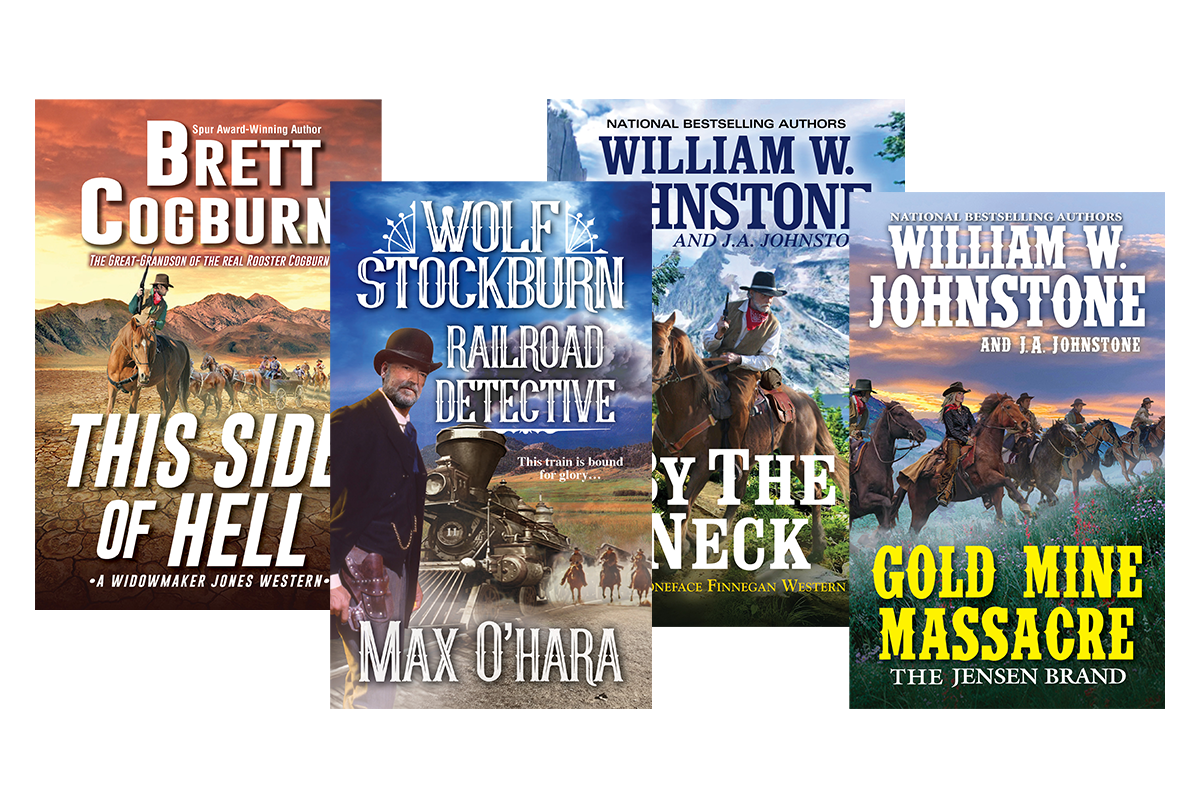 Kensington Books has some amazing new releases featuring frontier lawmen (and sometimes frontier men forced to take the law into their own hands). Each of these books also shows the impact of the California Gold Rush and “gold fever” in different ways, from increasing demand on westward expansion and the building of railroads, to contributing to the lawlessness of the west.

THIS SIDE OF HELL: A Widowmaker Jones Western #4 by Brett Cogburn 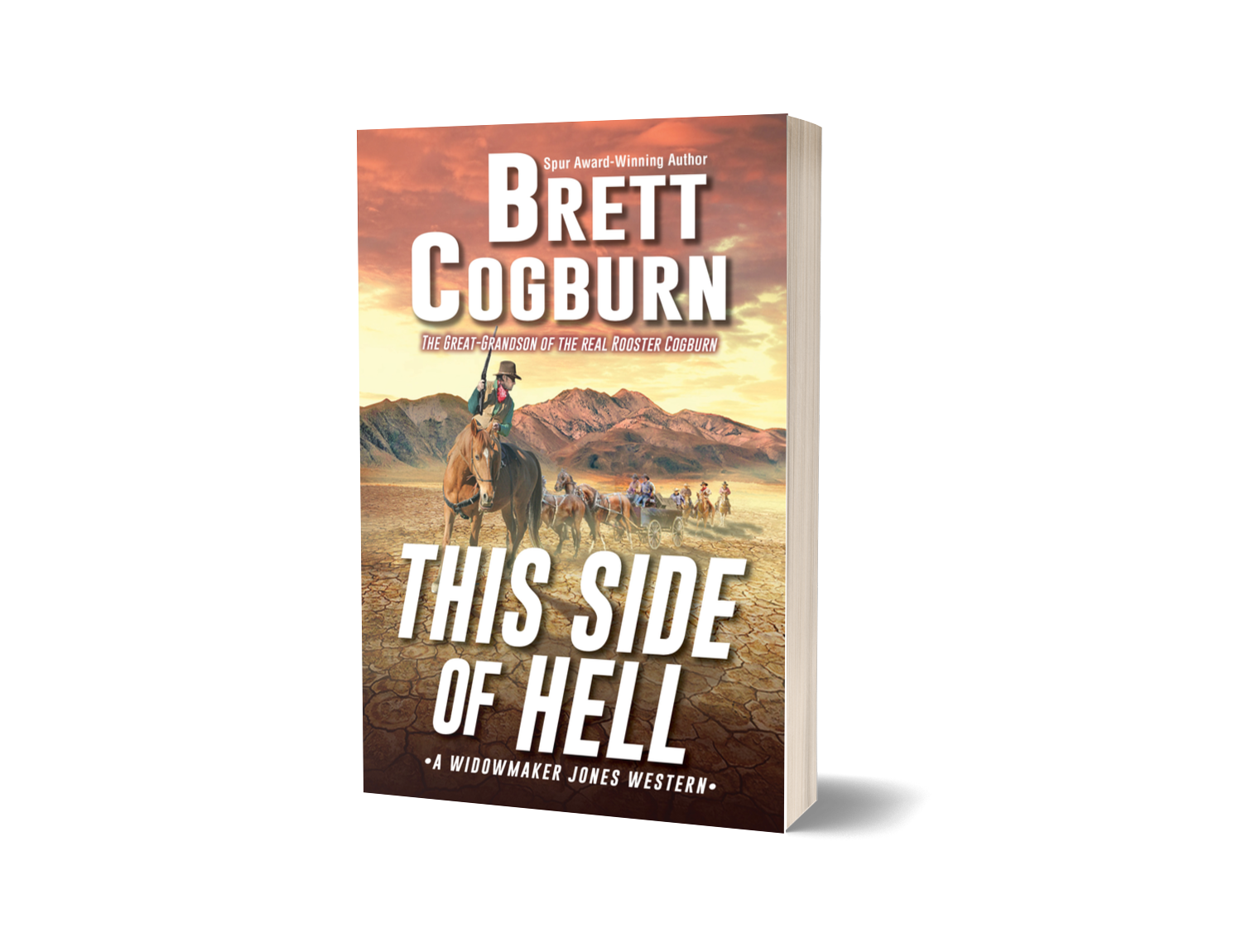 Two-time Spur Award winner Brett Cogburn brings back the true grit and glory of the Old West with the fourth installment in his highly acclaimed Widowmaker Jones series, as the master gunman teams up with Poker Alice, card player extraordinaire, in a doomed search for lost treasure, a deadly trek through the desert—and a dangerous alliance with the greatest gunslingers in history…

Poker Alice knows when hold ‘em, when to fold ‘em, and when to team up with master gunman Newt “Widowmaker” Jones. She’s betting on Jones to protect her—and her money—on a treasure hunt in the California desert. Legend has it that a shipwreck is buried in the Salton sands. Some say it’s a Spanish galleon that got stuck when the sea ran dry. Other says it’s a Chinese junk full of pearls or a Viking ship filled with Aztec treasure. Either way, a lot of very mean and dangerously violent folks would kill to find it. Which is why Poker Annie needs the Widowmaker. In this game, it’s winner takes all. Losers die… 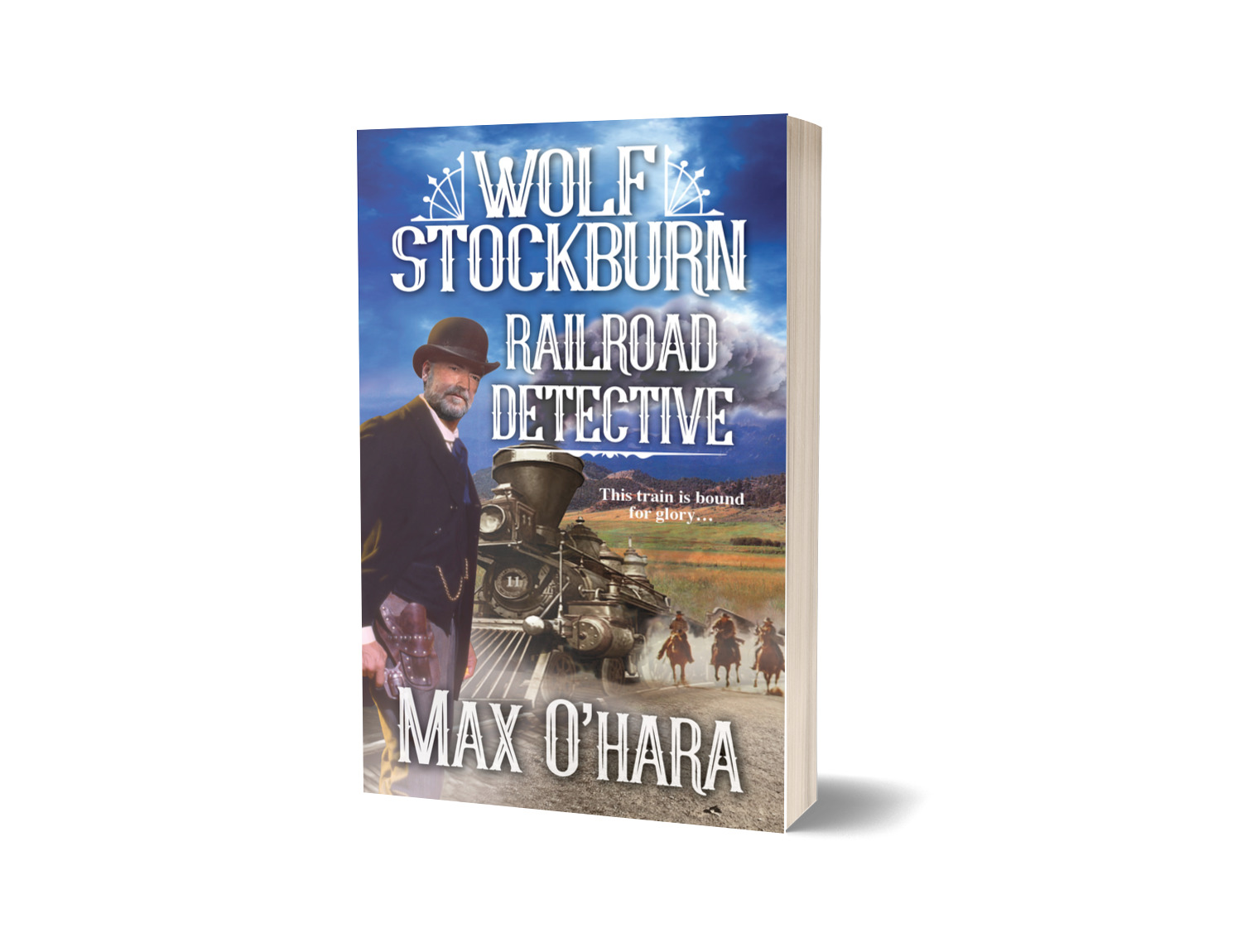 Introducing a rail-blazing new series set in the early days of the transcontinental railroad—when America headed west, outlaws climbed on board, and one man risked his life to stop them in their tracks…

The newspapers call them the Devil’s Horde. A well-oiled team of cutthroat bandits who terrorize the Northern Pacific Railway on route to the coast through Dakota Territory. They dynamite the tracks, blow open the express car door, murder the crewmen, rob the passengers, and empty the safe of gold and cash. If Wells Fargo & Company can’t find a way to stop the Devil’s Horde, there’ll be hell to pay…

Enter Wolf Stockburn. A tall rangy Scotsman who dresses like a gentleman but shoots like a cowboy, Stockburn learned his craft from a legendary gunfighter—and honed his skills as a Pony Express rider through hostile Indian country. Now the veteran Wells Fargo’s detective will ride the rails from coast to coast. Make sure the train and its passengers reach their destination safely. And take down the Devil’s Horde—one by one, bullet by bullet—the devil be damned.

BY THE NECK: Book 1 in the Stoneface Finnegan Westerns by William W. Johnstone and J.A. Johnstone 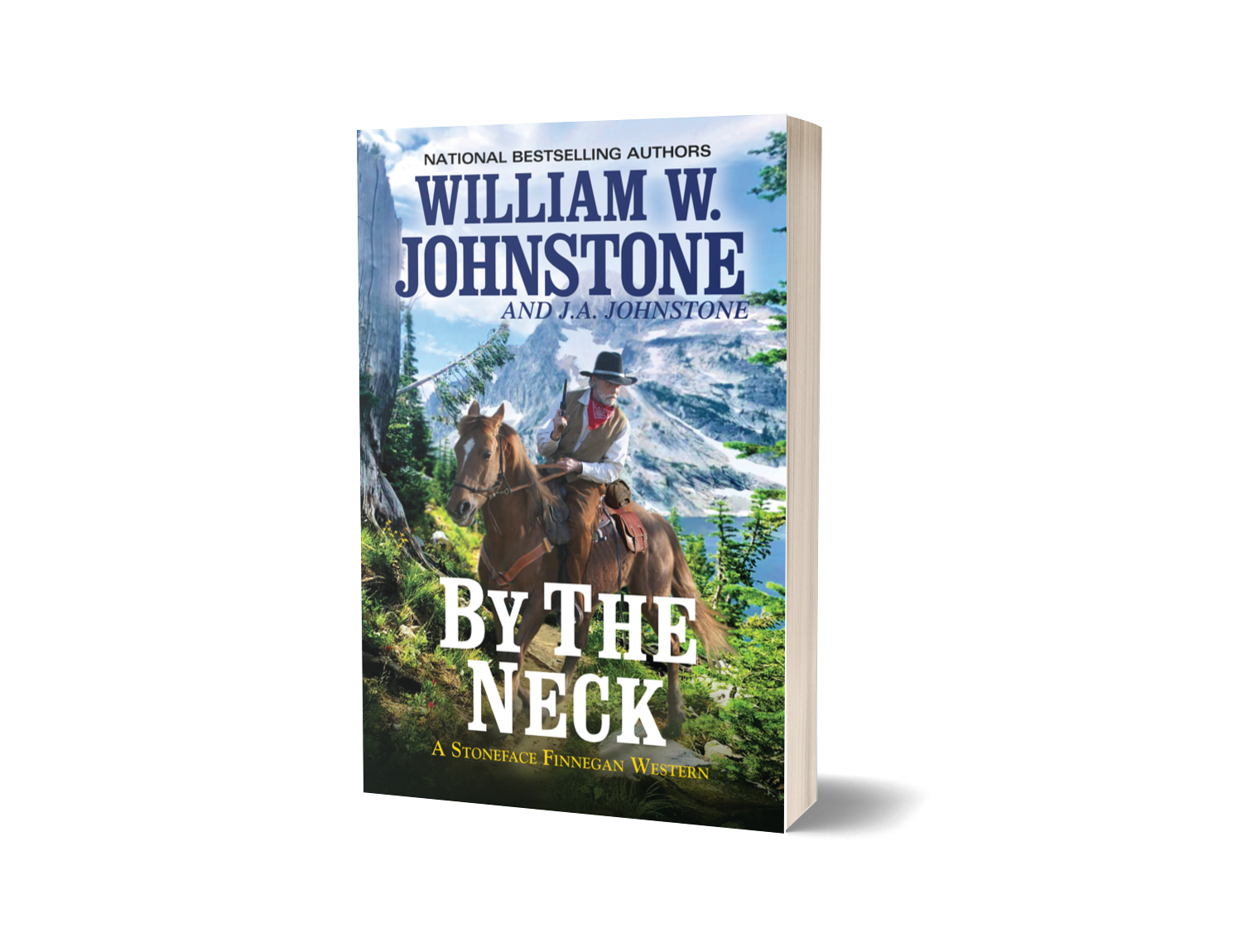 Legendary bestselling Western authors William W. Johnstone and J.A. Johnstone kick off a blazing new series featuring Stoneface Finnegan, the former Pinkerton agent now serving up shots of justice as the owner of a boomtown saloon in Idaho Territory. Rollie Finnegan is a man of few words. As a former Pinkerton agent with two decades of experience under his belt, he uses his stony silence to break down suspects and squeeze out confessions. Hence the nickname Stoneface. Over the years, he’s locked up plenty of killers. Now he’s ready to make a killing—for himself…

There’s gold in the mountains of Idaho Territory. And the town of Boar Gulch is a golden opportunity for a tough guy like Finnegan. But when he arrives, the local saloon owner is gunned down in cold blood—and Finnegan makes a cold calculation of his own. Instead of working in a mine, he’ll buy the saloon. Instead of gold, he’ll mine the miners. And instead of getting dirty, he’ll clean up this grimy little boomtown once and for all—with his own brand of Stoneface justice…

GOLD MINE MASSACRE: The Jensen Brand #4 by William W. Johnstone and J.A. Johnstone 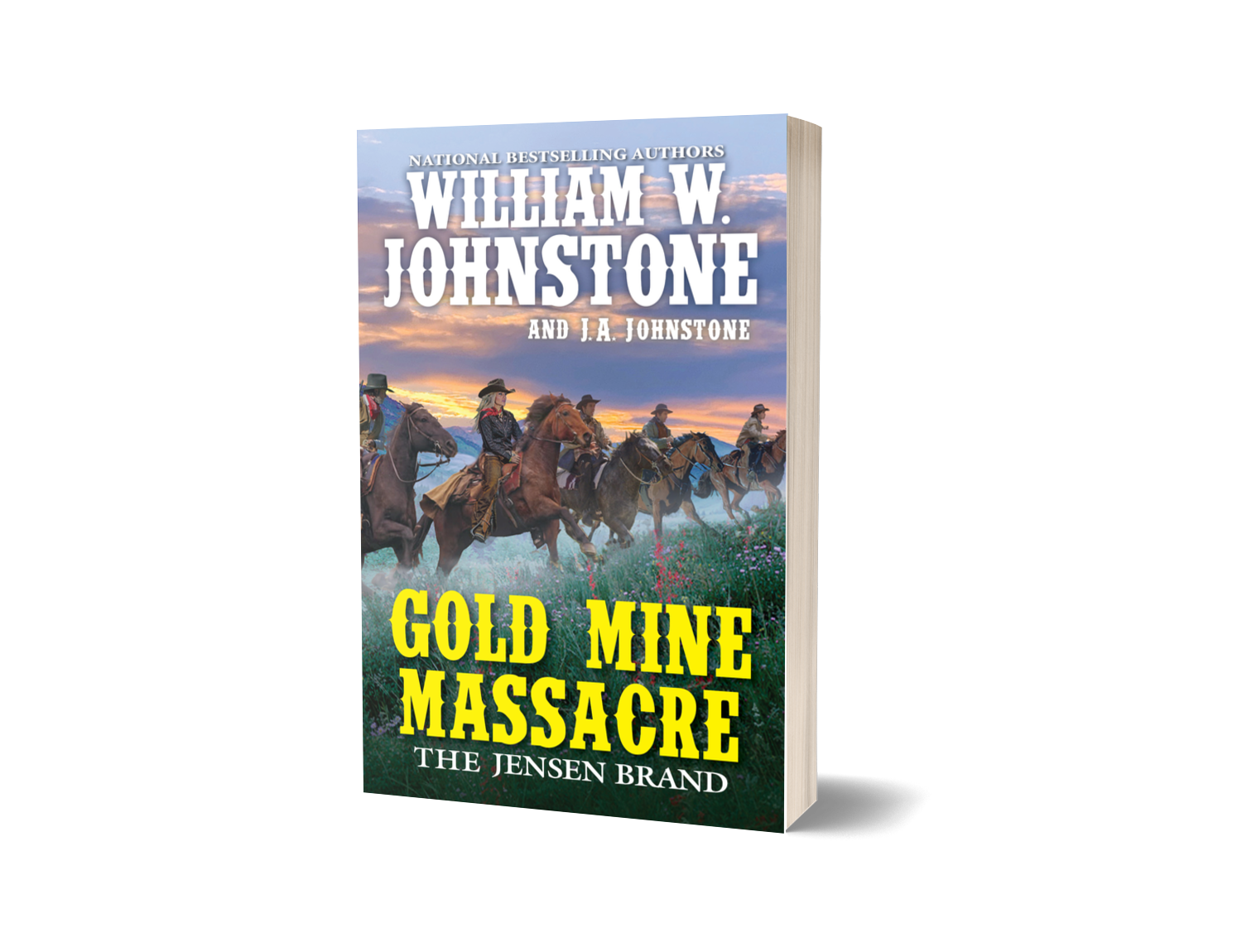 This book is the fourth in an epic new series spin-off from the Johnstones’ most enduring legacy–The Mountain Man Series–as Smoke Jensen’s long-lost offspring return to the adventure of the American Frontier.

For Smoke Jensen and his daughter Denny, life on the Sugarloaf Ranch is more valuable than all the gold in the world. Which works out fine, since all the gold mines in Big Rock were squeezed dry years ago. Even so, that won’t stop a pair of businessmen from the East from trying to squeeze out a little more.

One of them, Strom, has developed a newfangled method for extracting gold—something called “hydraulics” and they’ve bought up all the old mines to do it. The other, Conrad Morgan, is the son of legendary gunfighter Frank Morgan, and Denny thinks he’s awfully handsome. Smoke isn’t sure what to think of these would-be gold diggers. Especially when the handsome one triggers a rivalry with Denny’s off-and-on beau, a deputy U.S. marshal.

The new mining operation causes trouble from the start, damaging the landscape and fouling the streams, and the ranchers in the valley are soon up in arms about the whole thing and look to Smoke to help them run off the newcomers.
Not only that, but the cowboys from the spreads clash frequently with the miners when they all head into Big Rock to blow off steam. Over time, the miners tend to congregate at Blaise’s Place while the cowboys, naturally enough, patronize the Brown Dirt Cowboy. That separation calms things down a bit, but Big Rock still seems like an armed camp ready to explode at the slightest spark.
Sabotage at the mines causes the situation to boil over into open war between the cattlemen and Axel Strom’s forces. Strom has brought in hired guns to protect the mines, but the boss of these gun-wolves, Mace Lundeen, really has his eye on all the rich cattle ranches in the valley and plans to plunder them of their stock, all under the guise of being “security” for the mines.

The Jensons can smell trouble brewing from a mile away. And when it involves gold, guns, and love, it’s more than just trouble. It’s a massacre waiting to happen…