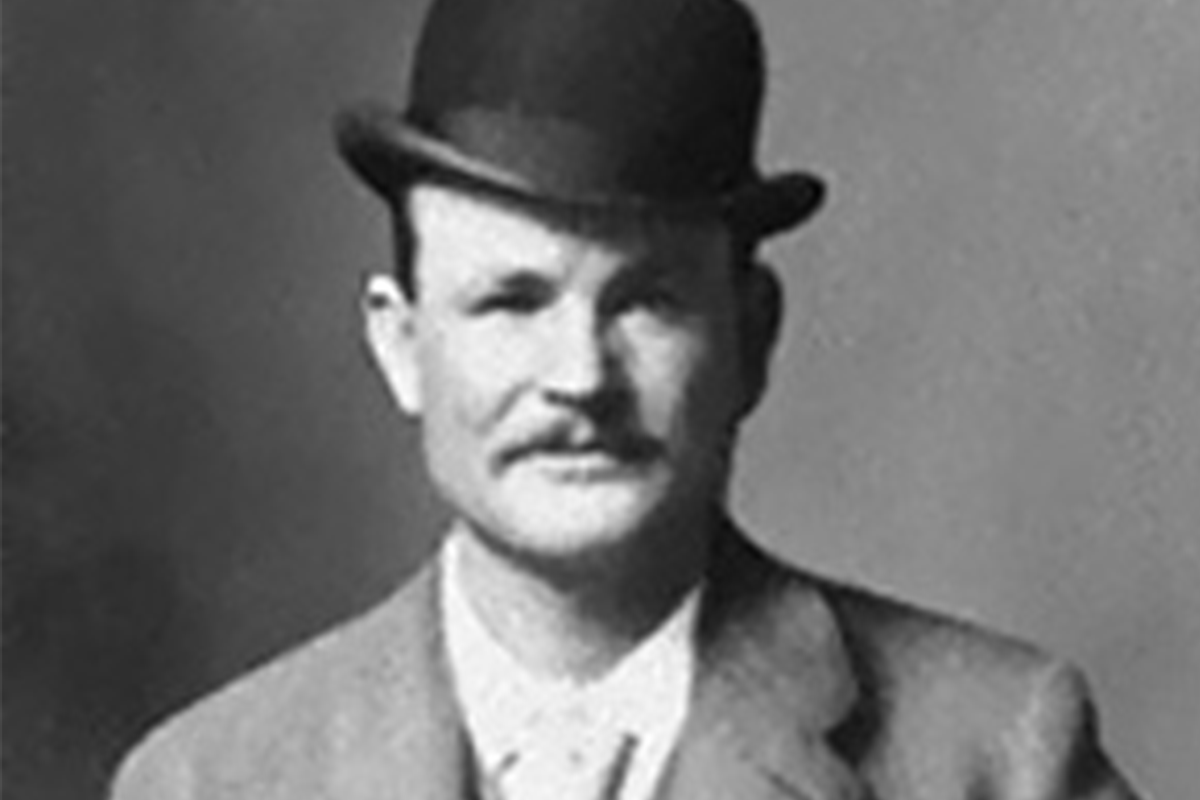 I’ve always heard that Butch was the first to have used relays of horses in 1889 to escape pursuing posses. I had a question today from a reader who wanted to know if the James-Youngers and the Dalton Brothers used relays. My first thought was the terrain was much different out West opposed to the woodlands of Missouri and Oklahoma. I know the James and Youngers were sportsmen and owned racehorses as did the Daltons and they didn’t have to travel many miles to elude the posses in those settled areas.

Butch spent a lot of time planning a robbery and part of that planning was having fresh horses.

Butch Cassidy painstakingly laid out an escape route in advance, bolstered by relay teams of fresh horses. Attention to detail would become a hallmark of robberies

Although Patterson thinks the bunch probably only robbed four banks, four express trains and a coal company payroll office, they were soon blamed for every robbery in the Northwest. It was Cassidy’s meticulous planning that made his robberies so successful.

Dan Buck: I have never quite bought into the idea that Butch Cassidy was the first bandit to use relay horses, that is, at the 1889 Telluride bank holdup, mostly because I instinctively doubt all claims of first anything, and in part because having relay horses sounds so basic, like John Dillinger making sure his 1932 Plymouth is gassed up before robbing a bank. On the other hand, I don’t know of an earlier example than Cassidy in 1889, but then I don’t recall I ever seriously looked.

Roy Young: I’ve never heard of either the James Younger or the Daltons gangs using relay horses, but I’m pretty sure Quantrill did, and Frank and Jesse were both former members of his band of guerrillas.

Larry Ball: It is true that the James and Dalton bands operated in a smaller area generally and presumably just relied upon very good horses.  However, they could always count on picking up fresh mounts from friendly or sympathetic persons on their escape routes.  Cassidy and his compatriots flourished in a time when the Rocky Mountain West was gaining in population and they had to ride farther to escape.  Relays made sense.  One aspect of the Wild Bunch’s escapes was a reliance upon pack animals.

Matt Warner recalled that they would never undertake a long ride without a pack horses, which meant that the Cassidy gang did not ride hell-for-leather over hundreds of miles and simply kill their horses.  They rode steadily, as did pursuing posses, with pauses and rest.  The Hollywood movies have engrained in us the notion that robbers and stagecoaches sped across the frontier.  That is nonsense.  Nor did railways trains try to outrun bandits.  Nor did bandits try to run down trains, or stagecoaches.

Donna Rose Harrell: No, the James -Younger gang didn’t use relay horses. Their robberies were in populated areas. Many of the people on the escape routes were family, close or distant, or former soldiers who were happy to help. The posses weren’t very motivated to catch the outlaws so didn’t chase them for long. Even ordinary farmers were happy to house the well-paying traveler’s. The biggest reasons for the Northfield disaster was this lack of friendly supporters on the escape route and motivated posses that didn’t give up.

If they needed a new horse, they borrowed from family/friends, traded horses on the escape route (at gun point) or just stole them. My great-great grandfather, Kitt Rose, said that one time a sick Jesse James showed up. He asked to borrow a horse and $40. Two weeks later, someone brought the horse back with $40.

The robberies by the Dalton gang were mostly in their home area of Oklahoma. They didn’t need relay horses for the same reasons – lots of family and friends to help them.

Mike Bell: The short answer is that the concept seems to have been first invented by Tom McCarty, Matt Warner and Bob Parker for the June 1889 Telluride bank robbery.

The longer answer is that I spent a happy weekend going through my library re-reading material on the James-Younger gang, the Daltons, Bill Doolin, and the McCarty’s, and revisiting accounts of Wild Bunch robberies.

I also consulted Bob Wybrow, who has researched and written extensively on the James-Younger gang.

On the James-younger gang we can find no evidence that they used relays. But as you indicated, they were operating in a different environment from Cassidy. In the immediate post-war era they robbed banks in a relatively heavily wooded and populated area in which they could rely upon the sympathy or fear of the population to hide them. In addition, they used terror to minimize pursuit by shooting up the town if necessary. Bob indicates that there were a couple of occasions in which the James-Younger gang changed horses, but these were not relays, they were “bought” or borrowed from farmer’s.

In addition, they had a family base to which they could retreat. And many of their early robberies were relatively close to home. The key indication that they did NOT use relays is the disastrous Northfield raid in 1876.

All their previous tactics failed them. The wider population was not sympathetic, their attempts to cow the people of Northfield failed and they lost men. They clearly had no relays as Frank and Jesse finally escaped by riding the same horse, while the Youngers were pinned down by a posse in Hansa Slough, having been on foot for some time. Their train robberies were committed in wooded countryside where, again, they could use the population and the terrain to their advantage. Mid-west train robberies differed from western train robberies in that by the time a posse got to the site the robbers were long gone into terrain that made them hard to follow and where they could melt away.

Bob and I cannot think of a James gang train robbery where lawman came close during the immediate pursuit.

That had the advantage that they knew the train would stop, but the disadvantage of a bank robbery; the townspeople might get riled. In all four cases there is no evidence that they used relays. They disappeared into the cane breaks and bottoms and made their way home.

Once again, the disaster is what indicates they made no use of relays. The attack on the banks in Coffeyville on October 5, 1892 has been documented in great detail, including the camp where they spent the night beforehand.

They made the same mistakes as the James Younger gang at Northfield. Bob Dalton thought he had friends in the town, even though it had been some time since he lived there; they believed the townspeople would not fight back; they believed they could outrun any immediate pursuit and therefore relays do not even appear to have been considered. All wrong. Reviewing the evidence of many bank robberies, it is clear that someone usually tries to fight back. That is fine if they can be overpowered by sufficient force, but the risk remains high.

The best example of where relay horses become irrelevant is the McCarty’s raid on Delta, Colorado bank robbery of 6 September 1893.

By this time Tom McCarty had parted company with Matt Warner and Butch Cassidy – lucky for them. We know the gang had relays as they were hidden in a draw outside the town.

But W. R. Simpson and his Sharps made the relay horses irrelevant to two of the three outlaws, as he blasted Fred and Bill out of the saddle.

We know from the press accounts that Cassidy or others used relay horses at the Montpelier bank robbery in 1896, at Castle Gate in 1897, probably NOT at Belle Fourche in 1897 as some accounts say that the pursuers changed horses but the robbers did not, they did use them at the Wilcox train robbery in 1899, at the Tipton train robbery in 1900, and in the Winnemucca bank robbery in 1900. In the latter case the local posse almost overhauled the outlaws as they were changing horses, but they were held back by rifle fire.

Fast horses were used to outrun immediate pursuit, then solid horses for longer run to reach a safe base – Robbers Roost, Hole in the Wall , Powder Springs. This doesn’t mean that all those robberies involved Butch, just that the idea had caught on because it made sense in open, sparsely populated, country. Relays used also at the Villa Mercedes bank robbery in Argentina in 1905. They helped the robbers make the long run to Chile.

Ironically, at what is believed to be Cassidy’s last robbery – the Aramayo Mine Payroll in Bolivia in November 1908 – he did not use relays.

They would have been of little use to him. The terrain was mountainous and better suited to mules, which have great stamina and are surer-footed than horses. The robbers headed south towards Argentina, but then doubled back into the mountains. One version of the account of the deaths of the two men in San Vicente on the night of November 6/7 1908 is that the mule they had taken from the Aramayo pack train was recognized; another is that any gringos arriving in the small town would have aroused the suspicion of the police and soldiers.