The Battle of Plum Creek 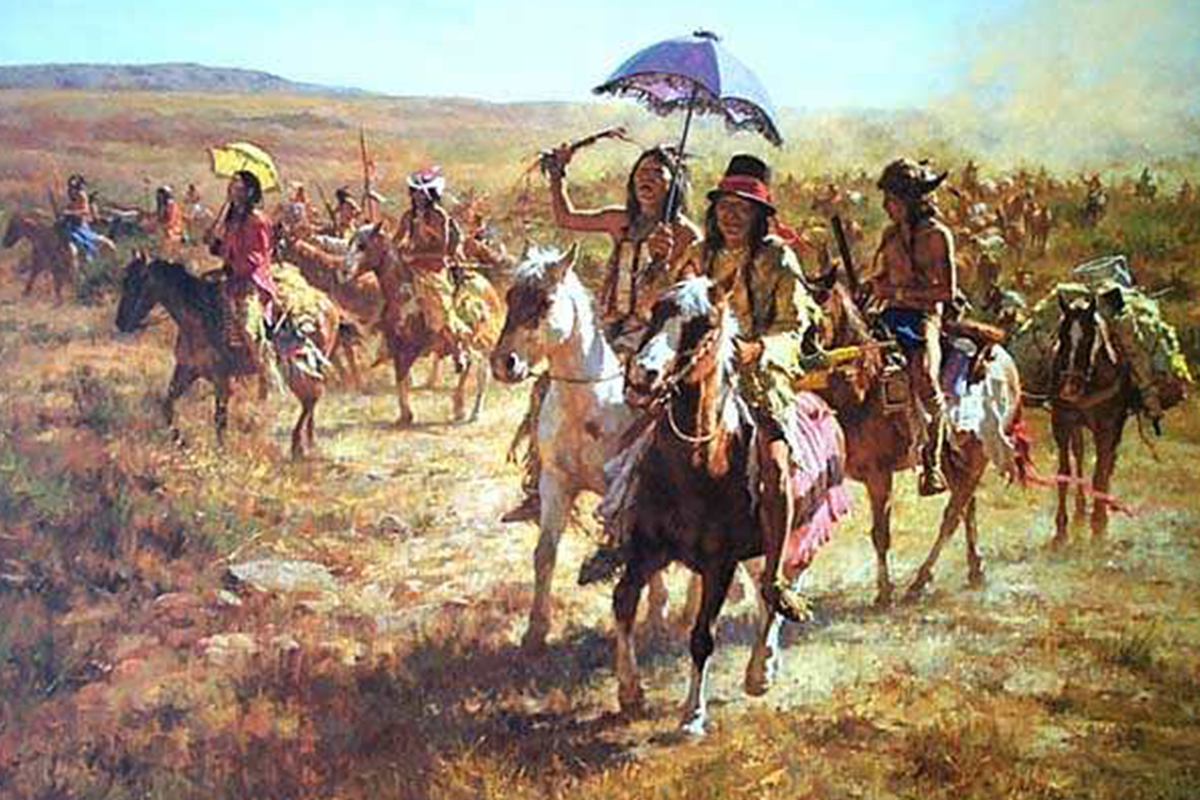 Under the Comanche moon of August 1840, 400 to 1000 warriors under Buffalo Hump cut a swath of destruction on a vengeance ride through the Rio Grande Valley. Attacking entire communities was a rarity as they usually fought guerilla style.

On August 6th, they swarmed over the town of Victoria, looting and killing. Linville, the seaport for San Antonio, was their next target. Buffalo Hump and his warriors easily took the town, as the locals escaped in boats. Judge John Hays was so enraged he came back to shore and waving his empty shotgun shouted at them. The Comanche ignored him and continued pillaging.  It’s not known whether they respected his bravery or thought he was crazy. It wasn’t until afterwards that Hays realized his shotgun was unloaded.

Buffalo Hump’s warriors spent the entire day ravaging the town. But taking so much loot slowed them down and would lead to their undoing. They raided the customs house and murdered and scalped inspector Major Hugh Watts a Juliet.  Mrs. Watts, a strikingly pretty, red-headed woman. They ripped off her dress but when they tried to gang rape her, they couldn’t figure how to get her whale-bone corset unraveled.

The warriors spent the entire day looting the warehouse filled with goods awaiting shipment to San Antonio. They created quite a spectacle, decorating themselves with frock coats and stovepipe hats. Some donned women’s dresses and petticoats while others strolled around sporting stylish parasols.

Up to then they had been more interested in looting and that included 2,000 horses, until the Rangers arrived. They decided to lighten their load casting off plunder, which marked an easy trail for the Rangers to follow.

At Plum Creek, a branch of the San Marcos River, they began killing their prisoners. During their flight they had tied the unfortunate Mrs. Watts on the back of a horse and were taking her along but when they reached the creek, they decided to dispose of her. That complicated, man discouraging corset that saved her from being gang raped was about to save her again. They tied her to a tree and fired an arrow into her breast. Instead of killing her it lodged in her corset. When the Rangers arrived, she was alive but badly sunburned in places that seldom saw the sun.

To delay while, others moved on with the loot, the rear-guard warriors pranced and paraded, exhibiting amazing feats of horsemanship. Red ribbons streamed from their horses’ tails, as they rode around the Texans who were awed by the show of bravado. One wore a stovepipe hat; another had a pigeon-tailed coat. On their heads some wore immense buck and buffalo horns. Another had a headdress of a large white crane with red eyes.

One chief rode out and challenged the Rangers to individual combat. A rifle shot dropped him from his mount. The fight was on. Screaming and shooting the Texans stampeded the Comanche horse herd, scattering the warriors. Straying from their usual tactics of guerilla warfare was very uncharacteristic of the Comanche and they would pay dearly. The running fight went some 15 miles. The Texans lost only one, the Comanche’s more than eighty.

That night a victory celebration was held as the moon came up over Plum Creek. The cannibalistic Tonkawa Indians, acting as scouts for the Texans, held a victory dance and feasted mightily on the bodies of dead Comanche’s.