The Last Days of Steamboats on the Colorado 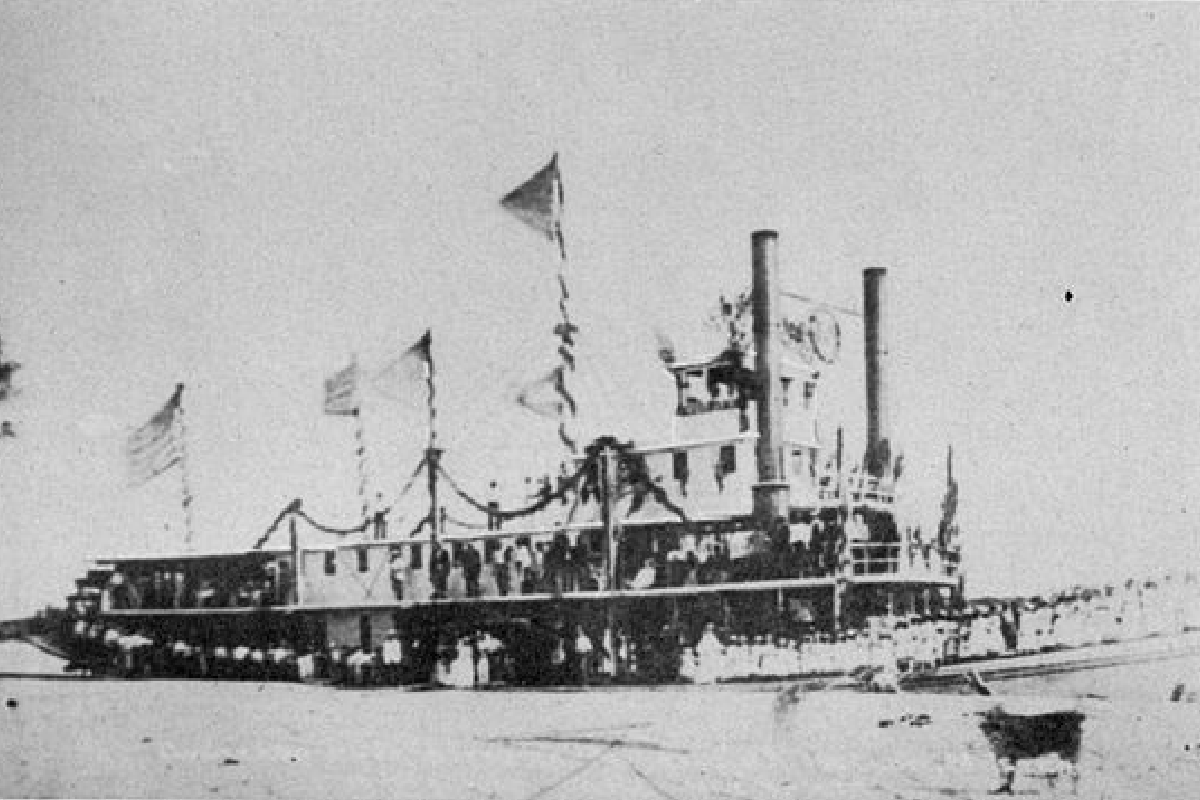 The steamboats on the Colorado weren’t the floating palaces that Mark Twain wrote about. They were built to be strictly functional. They were unusually wide so they could carry heavy loads in the shallow waters. Most of the boats were double-deckers plus a wheelhouse although some of the later models were larger. Stern-wheelers were preferred to side-wheelers. Shifting sand bars were a constant hazard and oftentimes the water was so shallow and the pilots had to navigate in less than 2 feet. At times the pilots had to reverse the boat and use the paddlewheel to literally chew their way through a sand bar. As commerce increased, bigger and better steamers came into use. Some carried up to 120 tons of cargo and had three decks.

The local natives made a good living cutting mesquite wood for the woodburning steamboat engines. They would leave the firewood on one of the landings, the steamers would stop, pick up the wood and the skipper would leave the money in a designated location.

Going up the Colorado obviously took much more time than coming down. In some areas further up the river winches were used to pull the steamers through the rapids. One pilot reported a trip upstream from El Dorado Canyon took him seventeen hours while the same trip down took less than three.

Passenger fares from California to Arizona in the 1870s ranged from $40 to $90 one way. The trip began in San Francisco and prior to 1870, went by sail down around the tip of Baja California and up to the mouth of the Colorado, where the passengers and freight were shifted to tiny steamers. After 1870 steamships were used for the ocean voyage.

Martha Summerhays, a young Army wife, painted a vivid picture of travel on the Colorado was like in August 1874. “The temperature was 122 degrees in the shade, the drinking water was 86 degrees and the butter poured like oil. The spoiled food caused the refrigerator to stink indescribably, the meat turned green, and it was too hot to nap.” A “quick trip” up the Colorado to Fort Mohave took eighteen days.

Major ports on the Colorado were Yuma, Ehrenberg and Hardyville (Ft. Mohave). There were river ports as far up the river as Rioville, where the Virgin River meets the Colorado. For a time the Mormons in Utah used the port at Callville as a base to bring in supplies from their colony at San Bernardino, California. With the completion of the dam in 1936, the waters of Lake Mead eventually buried Callville beneath 400 feet of lake water.

The steamboat business lasted for over fifty years on the Colorado River. For half that time it was the most important means of transporting goods in and out of Arizona. Pilots like George Johnson, Jack Mellon and Isaac Polhamus were legendary skippers on the rivers.

Captain Johnson ran the Colorado Steam Navigation Company until 1878, when he sold out to the Southern Pacific Railroad. The east-west route of the railroad followed a more natural flow of traffic, though for a time the steamers continued to act as feeder lines for the railroad. With the construction of Laguna Dam in 1908, the colorful era of the steamboats on the Colorado ended.

There are still excursion river tours such as the Laughlin River Tours where one can experience the nostalgic era when steamboats plied the Colorado River.