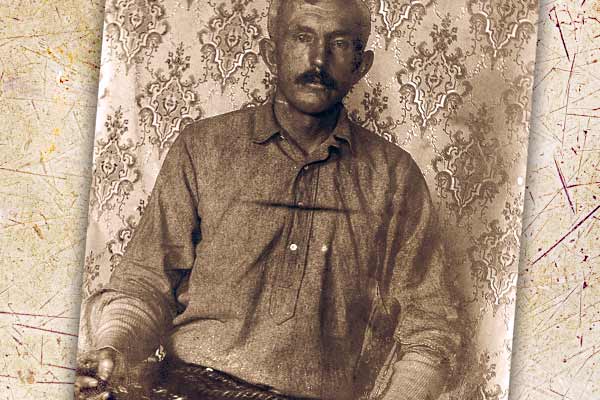 Tom Horn occupies a prominent, if controversial, place in frontier annals. While he had a varied career in his 43 years—miner, cowpuncher, pioneer rodeo star and lawman—his most enduring legacy was as a civilian packer and scout for the U.S. Army in the Apache campaigns of the 1880s, as a Pinkerton operative and, finally, as a Wyoming range detective.

As a means to leave his version of his life for posterity, Horn wrote his autobiography while awaiting execution in a Cheyenne jail. Although he concluded his life story nearly 10 years before his death, the autobiography has had much to do with the creation of his legend. Horn’s exaggerations, especially in his account of the Apache campaigns, are glaring and untrustworthy. This book, when combined with tales that later circulated about Horn’s activities as a “hit man” for Wyoming cattle barons, has had the effect of making the real Tom Horn difficult to discern.

1.  Estranged from His Family

Horn asserted that his father, a fervent Disciples of Christ follower, was such a strict disciplinarian that he chased his son away from home at the age of 14. This was partly true. He was probably several years older when he left, and he maintained contact with his family. In the late 1870s, he and his older brother, Charles, ran their father’s livery stable in Burrton, Kansas. When he became a Pinkerton operative in Denver, Colorado, in 1890, his sister Maude served as his housekeeper.

Horn told readers that Al Sieber, the most noted civilian scout in the Apache Wars, hired him as an assistant in 1876, and that Horn immediately became a scout. However, Horn did not arrive in Arizona Territory until 1881. Army quartermaster records indicate Horn was first employed in September 1881 as a teamster at Whipple Barracks, near Prescott. He soon moved to the pack train service and remained there until 1885, when the Army began to use him as a scout. Only in the fall of that year did he become a chief of scouts, a position he held until October 1886.

One of Horn’s most outrageous assertions was his fluency in the Apache language. The Missourian did not speak the Apache tongue well enough to interpret in formal negotiations. Horn did learn the border Spanish that prevailed in the Southwest well enough to serve as an Army interpreter in that lingo.

Horn declared that Apache war leader Geronimo insisted only Horn could serve as his interpreter. As a chief of scouts (several were always at work during campaigns), Horn was present in the final pursuit of Geronimo in the summer of 1886, but he was never Geronimo’s interpreter, and certainly not for the formal surrender in Arizona in September 1886. Horn did personally escort Geronimo to the train at Bowie Station that transported the captives into exile in Florida.

While Horn did not admit in his autobiography that he took an Apache girl as his common-law wife on the San Carlos Reservation, Sawn, whom he called his “housekeeper,” may have been his wife.  In the Apache language, Sawn meant “my wife” or “my old lady.” Furthermore, she may have given birth to one, possibly two, children by Horn. He reportedly deserted his family when he joined the Pinkerton National Detective Agency in 1890.

Horn’s performance as a Pinkerton operative was spotty. He won applause for helping catch the robbers who held up a train in Cotopaxi, Colorado, in August 1891, but he failed in another high profile case in Oregon. He was not only unsuccessful in locating the felons who had wrecked a train near Salem, but also, in an abrupt turn of events, was arrested for robbing a casino in Reno, Nevada! Two trials, and the influence of his employer, William Pinkerton, were required to gain an acquittal. While the citizens of Reno remained convinced of his guilt, Pinkerton asserted bandit Frank Shercliffe did the deed.

In May 1892, the Pinkerton agency sent Horn to Johnson County in the aftermath of the Cattlemen’s Invasion. Horn left the Pinkertons and gained employ with the Wyoming Stock Growers Association and, later, entered the service of individual range barons. While Horn was never convicted in a court of law of assassinating an alleged livestock thief, by 1895 he had the reputation of being a killer-for-hire.  He may have shot and killed at least four men, but the story that he killed 17 men in Colorado alone is pure myth.

Horn’s contemporaries never regarded him as a gunfighter. As a consequence, he failed to gain a place in the popular mind or in Hollywood equal to a Wyatt Earp or a Billy the Kid. (His reputation as a man who shot his victims from ambush diminished his appeal.) Nor was he an accomplished brawler. In spite of his impressive physique—six feet two at 180-200 pounds—Horn was ineffective with his fists and shunned the use of a knife.

9. Veteran of the War with Spain

When war erupted with Spain in April 1898, Nelson Miles, commanding general of the U.S. Army, sought out Horn for the civilian pack train. With the 5th Corps in Cuba, chief packer Horn supervised eight pack trains. In spite of the foul weather, enemy guerilla activity and chronic illnesses among his packers, Horn persevered and won applause. Yet the War Department rebuffed him when he sought a position as pack master in the Philippines.

This is the unknowable myth. Horn’s supporters claimed Deputy U.S. Marshal Joe LeFors employed underhanded means to extract a confession that the range detective had killed 14-year-old Willie Nickell. Whether the confession was true or not, it sealed the fate of Horn, who was executed in November 1903.