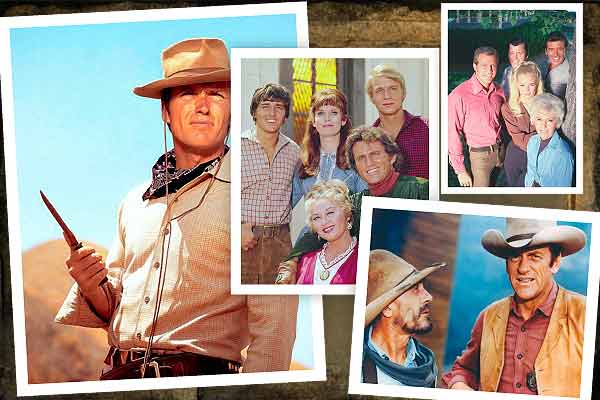 True giants don’t need to declare themselves, they just are, and William Blinn, the quiet man from Ohio, is a true giant. Blinn has a talent for telling unusual stories, with a deep emotional center, which propelled him to the “top of the mountain” when he became a staff writer on Bonanza.

His work on the NBC mega-hit lasted a single season. Then he moved on to other Westerns, including riding herd on Here Come the Brides, before changing television forever with his Emmy Award-winning script for Brian’s Song and his adaptation of Alex Haley’s Roots.

One of the most amazing qualities about Blinn is his ability to function in all genres. He is the creator of two seminal cop shows (Starsky & Hutch and The Rookies) and the man behind one of the most enduring, and endearing, family shows ever broadcast, Eight is Enough.

But long before the Emmys and accolades, Blinn was a scrapping young writer, trying to find a way into TV. He and buddy Michael Gleason, later the co-creator of Remington Steele, wrote spec scripts, hoping someone would take notice.

“Mike and I are lifelong friends, and we were both stage managers in New York, working television and theater. We were seeing a lot of shows, and right, wrong or indifferent, we said, ‘We can write better than this!’ Of course, we couldn’t,” Blinn tells True West. “We came out to the West Coast and wrote spec scripts for Twilight Zone and all these shows, and it was awful. We suffered from a woeful lack of knowledge about the medium, but neither one of us was dumb, so the scripts had a certain intelligence. Finally, we wrote a spec Rawhide (“Incident of the Portrait”), and that was the first sale.”

Blinn was a fan of Rawhide’s downbeat tone supplied by producer Charles Marquis Warren, who had brought the same sensibility to Gunsmoke. “Rawhide was moody, with deliberate pace, lots of close-ups, pre-dating Sergio Leone in a way. Of course, you couldn’t do the violence, but [Warren] made the show different,” Blinn says. “When I worked Rawhide, Paul King was the producer, so I never met Warren. Ted Post directed our first show and did it very well. It had a terrific cast, with John Ireland and Ted de Corsia.

“But I don’t think they knew what they had in Clint Eastwood. At one point, we had Rowdy Yates hear some bad news about another character, and we gave him an emotional ‘Oh, no’ reaction, and the front office said, ‘The kid can’t handle that stuff.’ Did you ever hear anything so stupid in your life?”

After selling a spec script to Laramie, Blinn and Gleason found themselves getting assignments, but their first hire wasn’t what they expected: “My Favorite Martian,” Blinn reveals, “and neither Mike nor I really had the heart for that kind of sitcom. That’s very specialized writing; we could do it, but it just wasn’t in our genes.”

With their individual reputations growing, Blinn and Gleason amicably split, with Gleason moving on to Peyton Place, and Blinn hired on for Bonanza, after writing a spec episode.

Bonanza was a plum assignment. The problem was that the show was in upheaval. “I was a staff writer on Bonanza for the first season without Pernell Roberts. The people doing the show didn’t like Pernell, but they were very insecure, because they didn’t know how the chemistry was going to change among the characters, now that there were only three guys instead of four,” Blinn says. “I thought it was great, because the rules changed. We didn’t have to stick to all the old formulas, because the dynamic was different now.

“That season was the first time, I think, that Mike Landon had an inkling that he could write and direct. He was always in the office, pitching stories, but what Mike loved to do was comedy. A very funny guy, and he came up with some good stories, and we did two of those.”

With one less Cartwright, the dynamic among the family unit was also changing. “The only conflict was that Mike felt he was a grown man and shouldn’t be bossed around anymore. And Lorne [Greene] agreed,” Blinn says. “They were ill at ease with the ‘Big Daddy’ nature of Lorne’s character [Ben Cartwright] and the ‘Little Boy’ aspect of Mike’s character [Joe Cartwright], but they knew that television lives have a different calendar. Characters mature much slowly, because the audience likes them a certain way….

“At the end of the season, Denne [Petitclerc] and I went off to do Shane at Paramount, and [Producer] David Dortort wanted us both to stay. Bonanza was the top of the mountain, but somebody else had created that mountain. We were the fourth team through the pass, and it was time to move on.”

Moving on meant working on a show from its inception, in this case, a series based on Jack Schaefer’s classic novel and the George Stevens film.

“Shane was interesting because the guys who were running it were based in New York. Herb Brodkin and his group were winning Emmy after Emmy for The Defenders, but weren’t Western people,” Blinn says. “And here Denne and I are, a little smarter after Bonanza, but not a lot, still enjoying this great adventure. We were doing shows the way you weren’t supposed to do them, but we didn’t know that. That offered a lot of freedom….We had guys who’d never written Westerns before, and they made some mistakes, but they also took us to these new, dark and creative areas that more traditional writers might not have done.”

In contrast to an Alan Ladd type, casting David Carradine also gave the series an unusual twist. “David was a very serious actor,” Blinn says. “I remember a scene: he was buying candy for the boy in the general store, and he was to cross the store to talk to another character. David said, ‘I don’t think I’d do that, because I’m buying candy for the kid, and I wouldn’t leave him, because I love him too much.’ I thought that was a little too fine-tuned, but this was an actor who was thinking.”

When Shane was canceled, Blinn propelled himself into The Big Valley and Gunsmoke before becoming the creative force behind Here Come the Brides. That series marked Blinn as one of the most talented dramatists in television.

Blinn’s early love of Westerns has never left him, and he has returned to the genre time and again, most recently as a novelist.

“My favorite Western of all time is The Ox-Bow Incident,” he admits. “It’s a small story, but with large themes. Not gunfight driven. It’s about the people. Westerns are larger than life, but the passions aren’t phony. The West is a survival place, and you’re in survival mode, living your life, and you do what you have to do.”