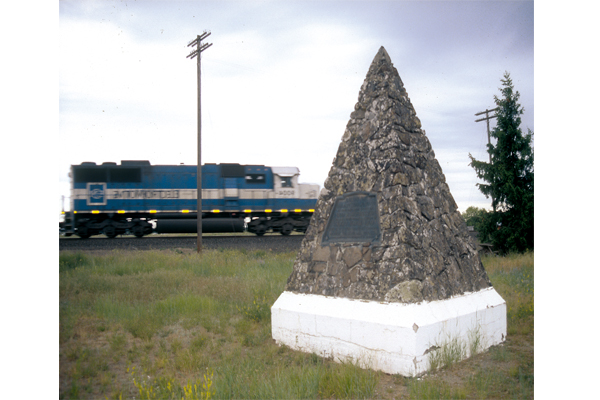 I’ll be the first to admit: I know nothing about the Battle of Spokane Plains.

Actually, I know little about the Pacific Northwest, except I admire Bill Gulick, love salmon and trout, and highly recommend Cayuse’s Syrah wine (2000 vintage) out of Walla Walla.

Yet, I’m bound for Spokane with one thing on my mind: Burned out on the Little Bighorn, I want something different, something without Lakota or Cheyenne, Custer or Reno, something before the Civil War that isn’t Lewis and Clark. Hmmm … Spokane Plains.

Okay, here’s what I’ve learned: In September 1858, Col. George Wright led a force of 700 troops and skirmished with Spokane, Palouse, Yakima and Coeur d’Alene Indians at an encampment at Four Lakes. The Indians were driven off, and Wright and the boys rested for a few days, then continued pursuit. At Spokane Plains, they clashed again, leaving four chiefs dead and the surviving leaders asking for peace.

Wright’s response: “I did not come into this country to ask you to make peace; I came here to fight.”

Anyway, the victors captured 800 or 900 horses, killing most of those, then moved on, eventually dictated peace terms and pretty much ended Indian hostilities in eastern Washington.

No, it’s not the Fetterman battle or Wounded Knee—only one soldier was wounded, Dee Brown didn’t cover it in Bury My Heart at Wounded Knee and Robert Utley gave it only a few sentences in Frontiersmen in Blue, though he called it “a grueling test of endurance.” But I’m determined to find proof of its existence in the 21st century.

“Unfortunately,” the local librarian tells me, “there is not much for tourists to see around the site.”

The Spokane Public Library’s Northwest Room does have a lot of reading material on the subject, plus maps and photos of the area in the 1916 Spokane Historical Society Report of the Battle of the Four Lakes.

You can find books, too, at the Northwest Museum of Arts & Culture, which, I’m told, has a “few” artifacts from the battle, none on display at the moment. Of course, if you’re interested in the Inland Northwest’s history, the museum’s “Spokane Timeline” exhibit chronicles the story of Spokane from before whites brought in men like Wright, diseases like measles and businesses like Starbucks.

Anyway, downtown Spokane is a pretty nifty place, once you get off I-90 and its omnipresent construction.

But I’m driving west, west on Highway 2, past the airport district, past some rather strange-looking businesses, past some strange-looking dudes, past the Northern Quest Casino where, methinks, locals (at least the Kalispel Tribe) are finally getting revenge on the intruders. Driving … driving.

If not for a red pickup, I would have driven right past the monument, but I happen to catch a glimpse of the truck and tell myself, “This must be it.” I hang a U and park beside the pickup, thinking, “Wow, I’m not the only one looking for Spokane Plains.”

But I’ve found it. There’s the monument, a little pyramid touting the Battle of Spokane Plains. As Wright’s adjutant put it: “By heavens! it was a glorious sight to see.” All right, he was talking about Four Lakes, but I’m not about to try to find that. Locating Spokane Plains was hard enough.

I bet, however, that I can find that casino.