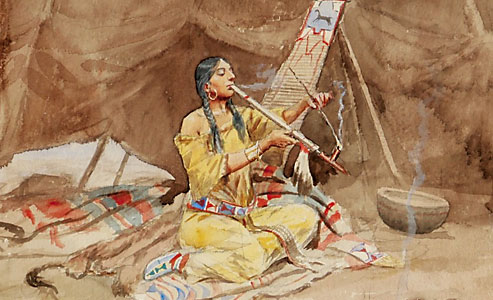 Charlie Russell was a man’s man. He painted buffalo hunts, Indian warfare and cowboys roping steers, like in the 1898 watercolor that sold as the top lot at The Russell auction held in Great Falls, Montana, on March 15-17, 2012.

At the same time, “no other artist in the western American genre has ever produced such a body of work” in which women were the primary subject as Russell did, devoting more than 300 artworks to them, wrote Ginger K. Renner in 1984.

Charlie’s nephew Austin remarked on how much his uncle favored these works over his more masculine depictions: “He still painted violent action gun fights, bear hunts, bucking broncos and so forth; but these were painted to sell. The ones he really liked were more contemplative: the tribe-women, children, old people on the trail of the buffalo runners: riders in the snow or at a waterhole: Indians singing the sun down.”

Thus it seemed fitting that Russell’s rather macho 1898 watercolor tied as the top lot with his rather sentimental Waiting for Her Brave’s Return, both selling for $375,000 bids.

The latter watercolor was painted in 1897, a year after the artist had married Nancy Cooper and the same year the couple moved to Great Falls, a place they would make their home until Russell’s death in 1926. “[W]hen Russell settled into his own domestic routine, the artist tipped his hand by frequently picturing family life inside a tipi,” notes Brian Dippie, who has authored numerous books on Russell, including working on the definitive catalogue raisonné published in 2007.

The watercolor depicts a young Indian woman lighting a pipe in the expectation of her warrior husband’s return. It is full of the iconography that is typical of Russell’s intimate domestic scenes. She sits on a painted buffalo robe, which, Renner wrote, provides an “exotic, primordial element.” The willow backrest in the center background introduces an “architectural as well as decorative accent to the composition.” The small fire in the foreground “represented for Russell the heat and warmth and life-giving sexuality of the young Indian women he painted in the intimacy of their lodges.” The woman’s off-the-shoulder robe adds in an element of sensuality that would not offend the sensibilities of Victorian viewers.

This watercolor came from Ginger and her husband Fred’s collection. The two had actually met at the C.M. Russell Museum benefit auction in 1970. By that time, Ginger was already well known for having introduced to California desert audiences the works of artists like Ed Borein, Maynard Dixon, Olaf Wieghorst and Frank Tenney Johnson; she was also the owner of Trailside Galleries, which operates under new ownership today in Jackson Hole, Wyoming, and Scottsdale, Arizona.

Fred had retired from his job as a soil conservation and range management specialist, but not from his lifelong work of locating and documenting Russell’s artistic output. Born in Great Falls the year Charlie and Nancy moved there, Fred grew up knowing the artist through the friendship he had with Fred’s parents. He never lost his fascination for Russell, and Russell collectors remain thoroughly indebted to Fred’s work. When Fred died, Ginger took on his role as the foremost Russell authenticator.

A year has passed since Ginger’s death, and I, personally, am sad I no longer have her to turn to for her kind and wise tutelage. Given her profound admiration for the women Charlie depicted in his art, the collector who won this particular watercolor should know he got more than a piece of Charlie’s heart, but also a piece of Ginger’s too.