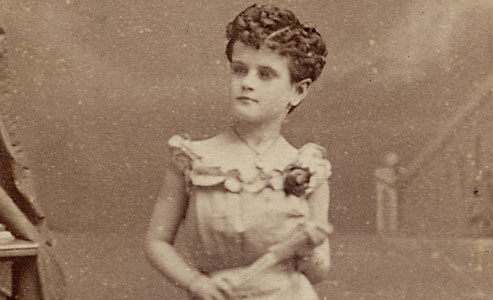 “Brains or Baby?” asked Mama McDonald, as she held a rather large gun in the face of her daughter’s would-be husband in 1881.

Thinking he needed his brains more than he needed “Baby,” the man unlocked Baby from the place he had hidden her for safekeeping and returned her to her mama.

Baby’s would-be husband lamented to the local newspaper a few days later. Picturing himself as her rescuer, he maintained she was ill-treated by her family, who kept her illiterate. Baby had met him on a Leadville street corner and followed him to his boarding house. “I would be willing to gamble that she is over nineteen. I know musicians who have played with her for ten or twelve years. I could tell you things that were done to her that would make your eyes stick out two feet and a half,” he said.

Who was this “Baby,” whose life was so tragic she needed saving? To explore her life up to that point, we head to the national variety circuit.

Baby McDonald, the darling of the Western mining towns, supposedly began her career at three years of age, appearing with her father, James, a champion clog and skate dancer. Baby was one of the earliest of the child variety star genre, which included Baby Rhinehart, Little Rosebud, Florence “Baby” Bindley and Master Dunn. These child stars belted out songs like adult pros and danced their way across the country with jigs and schottisches.

Brought to America in 1873 as part of Fattie Stewart’s troupe from England, the McDonalds first appeared in Philadelphia before taking on New York City’s variety theatres. Baby, the “infant prodigy,” toured the state in 1874, the Buffalo Courier reported. “The infant” would have been six, but advertisements show the family regularly took poetic license with her age.

The winter of 1874 found the McDonald duo touring the South, playing to packed houses of admirers smitten over the child wonder with the sweet voice. Serio-comic songs were her forte. Dressed as a fisher boy, she sang “So Exceeding Clever” and danced the Sailor’s Hornpipe. At the Gaiety Theatre in New Orleans, “The Baby” starred over lesser acts.

In early 1875, Baby presented a new repertoire of songs and dances, lest the audiences tire of her old act. In March, Baby shared a double bill with Young Apollo in Galveston, Texas. During most of 1876 she performed in San Francisco and Sacramento. In 1877, the tiny singer was listed as seven years old in Deadwood, Dakota Territory.

The family must have hightailed it out of Cleveland in 1879 as, that August, Baby’s father stabbed Opera House manager John Shay. On the idea that James would probably “stretch hemp” for the murder, the Deadwood paper opined the news seemed too good to be true. James was acquitted on the grounds of self-defense.

An 1880 census taker found the McDonalds residing in a Denver boarding house with other performers. Mary A. McDonald, presumably “Baby,” listed as 12 years old, was attending school. The following year the family settled in a home on State Street in the silver camp of Leadville; they performed at various Colorado mining locations.

Slightly over a month after Baby’s first marriage attempt in 1881, an aspiring local politician shot her father as he took a buggy load of children for a ride in Leadville. The politician had thought James was kidnapping the children.

Baby did marry, but life with a Leadville miner must have paled in comparison to the accolades of show business. She left her husband, Alexander Martin, during a blinding snowstorm, a decision apparently hers alone this time. Baby returned to the footlights.

A Leadville theatregoer recalled Baby’s act at the Theater Comique, a melodeon located near the red light district. Baby sang “Pretty as a Picture.” “She was, and graceful too, and knew how to act out the parts of the song,” the patron said in 1932.

The late 1880s found Baby appearing in vaudeville and burlesque as a juvenile impersonator, dancing girl and soubrette, under the name Polly McDonald. She continued to perform after marrying a Rochester, New York, merchant in 1885; their marriage ended in divorce. She returned to Leadville in 1887, and starred in the burlesque “Me and Jack” in 1891.

While on the road for “Me and Jack” in 1892, she stayed at the City Hotel in Providence, Rhode Island. One night, a sleepless Polly lit the gas light with a match so she could read. Unknowingly, she tossed the lit match under her dress, which ignited in flames.

Attempting to beat the flames with a nearby garment, she grabbed a woolen piece recently cleaned with naphtha, a highly flammable cleaning product. In an instant she became enveloped in flames and ran from the room screaming for help.

The night desk clerk extinguished the flames, but Polly agonized for five hours before dying in a local hospital. One can only wonder if “Baby’s” death was more painful than her life.

Carolyn Eichin owns a bed and breakfast in Virginia City, Nevada, with her husband. She has previously been published in The Las Vegas Review Journal’s Nevadan.