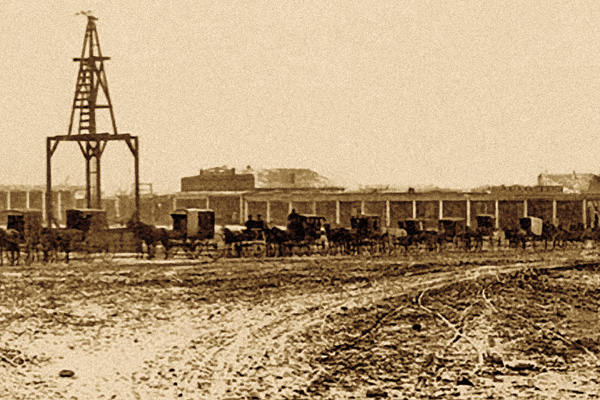 If you visit Las Vegas, New Mexico—and you should, considering all the Old West history that’s still alive there—head to the park blooming in the town’s historic plaza that dates to 1835.

A gazebo in the center of that plaza stands out among the trees. That’s where the windmill once stood. That’s where at least five men met their maker.

In 1876, the townspeople dug a well and put a windmill over it, hoping to pump out water. But the well went dry within a few months. The windmill became a curiosity, a place for boys to play and climb.

Three years later, Manuel Barela and Giovanni Dugi were locked up in the Las Vegas jail; both were charged with killing a man. In the early hours of June 5, 1879, vigilantes hauled out the pair and strung them up from the windmill. The hanging went so well, the self-appointed executioners set up another hanging a few months later.

On January 22, 1880, City Marshal Joe Carson—an alleged criminal himself and a member of the Dodge City Gang that ran Las Vegas—tried to enforce the no-carry law in a local dance hall. The four men he confronted about their firearms were drunk and uncooperative. Tom Henry, Jim West, John Dorsey and William Randall put nine bullets in the lawman, who crawled home only to drop dead.

Deputy “Mysterious” Dave Mather responded by killing Randall, severely wounding West and putting a slug in Henry’s leg. Henry and Dorsey got away. But not for long.

Two weeks after the shoot-out, Deputy Mather received information that the two fugitives were hiding out about 30 miles north of town. Deputy J.J. Webb and five men—including Billy the Kid’s buddy Dave Rudabaugh—went after the killers.

The posse cornered Henry and Dorsey. The criminals surrendered after the armed band promised protection from extralegal justice.

The posse took the two to the Las Vegas jail, where they joined compatriot West, who was expected to die of his wounds. Just after midnight on February 8, vigilantes—probably led by Mather—entered the cells and pulled out the three miscreants.

The mob took them all to the windmill. They looped a rope around West’s neck and strung him up. Then the scene turned interesting.

Somebody in the crowd, usually identified as Marshal Carson’s widow, began shooting at the three doomed men. Others in the crowd joined in. West, Henry and Dorsey’s bodies were riddled with bullets. The Hanging Windmill had reached a new level of infamy.

Within a couple of months, the citizens of Las Vegas, tired of the Dodge City Gang, forced the gang members to leave…or else. Mather and company sensibly split.

The town decided to erase some of the bad memories and tore down the windmill in April 1880. In its place, the citizens built a bandstand and cultivated a park around it; a gazebo marks the windmill site today.